On a recent Saturday evening, Ahmed al-Shabibi relaxed at a hookah café in England with other Iraqi friends – both Shiite and Sunni Muslims – when the conversation turned to the ongoing battle to reclaim the city of Tikrit from Islamic State jihadists.

A Sunni in the group lamented Iranian interference in the fight and boasted that such meddling never would’ve occurred under the former Sunni dictator, Saddam Hussein. Al-Shabibi said he and the others agreed because, “Saddam, as you know, had a very interesting idea of security.”

Nostalgia for Saddam is hardly new, but it appears to be reaching fever pitch these days because Iraq is in such bad shape, with vast territories lost to the Islamic State’s sadistic caliphate, the army in such shambles that Iranian-backed militias are filling the void and Americans once again bombing on behalf of a Shiite-led government whose sectarian policies are regarded as chief drivers of the Islamic State’s appeal.

And, al-Shabibi said, he’s noticed the same kind of dictator nostalgia cropping up for other Arab leaders whose abrupt exits from power have led to a tangle of interconnected conflicts across the Middle East and North Africa.

“I’m hearing Libyans talk of Gadhafi with fondness,” al-Shabibi said of late Libyan strongman Moammar Gadhafi. “And I think, really? For them it’s only been three years.” 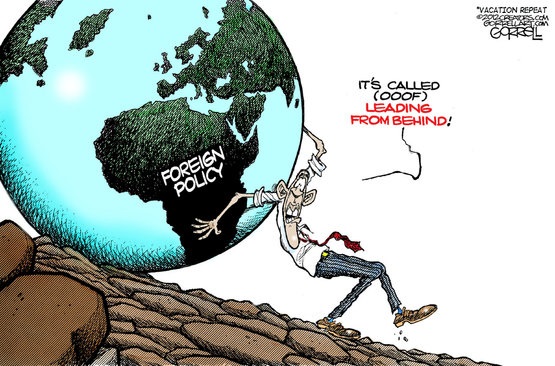 Why the cartoon of Obama? It was Bush who got rid of Saddam - and replaced him with a Shia government full of exiles who’d been living in Iran.

“You got rid of our biggest enemy - Sadda - and you turned Iraq into our closest ally.

2 posted on 03/31/2015 4:54:54 PM PDT by WilliamIII
[ Post Reply | Private Reply | To 1 | View Replies]
To: Oldeconomybuyer
I don't miss Saddam Hussein per se (wouldn't normally use that phrase but it really fits here)... but I do miss the pre-war political and military situation in Iraq:

It was a near-perfect situation (as near to perfect as is possible in that infinitely barbaric sh*t hole region of the world) and George W Bush, our President, went and f*'d it all up.

Followed by Barak Hussein Obama, our Dear Leader, who took a f*'d up situation and multiplied it by about a thousand.

And BTW (no one will convince me otherwise), Dear Leader was elected in 2008 precisely because of the invasion of Iraq.

Dear Leader was elected in 2008 precisely because of the invasion of Iraq.

Yes, Bush not only brought chaos to Iraq by deposing the strong-man who had kept order, by doing so Bush brought defeat to the GOP at home. and the defeat was so sweeping — so many Dems were elected, along with Obama — that they were able to pass Obamacare without any GOP votes. Thanks, George Bush!

My preferred scenario was this:

OBL identified positively @ Tora Bora 12/01
4 W-88 warheads airburst over his position at 30-second intervals
Bush flies to Baghdad the next day and is received by his new best friend Saddam
Next day on to New Delhi.

January 1, 2002, the Iraqi army with American air support marches on Riyadh, and a combined Indian-American expeditionary force crosses the line at Amritsar while seaborne landings of joint forces commence 15 miles West of Lahore.

March 1, 2002, the al-Saud family is deposed and the top 100 royals turned over to Uday and Qusay for their amusement. An American governor is installed in Riyadh. King Abdullah II of Jordan is appointed Sherif of Mecca and guardian of the holy mosques.

July 1, 2002 The Iraqi army crosses into Iran, this time with American air support and naval gunfire at the Strait of Hormuz.