Another Victory for the Laffer Curve, this Time over the Lifestyle Puritans
Townhall.com ^ | August 20, 2014 | Daniel J. Mitchell 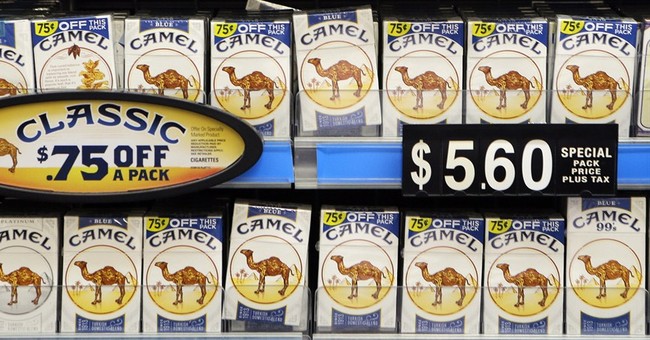 What do cigarettes and capital gains have in common?

Well, they both start with the same letter, so maybe the Cookie Monster could incorporate them into his favorite song, but I’m thinking about something else. Specifically, both cigarettes and capital gains tell us something important about tax policy, the Laffer Curve, and the limits of political bullying.

In both cases, there are folks on the left who disapprove of these two “c” words and want to penalize them with high tax rates.

But it turns out that both cigarettes and capital gains are moving targets, so the politicians are grossly mistaken if they think that punitive taxation will generate a windfall of revenue.

This might not be an ideal way of managing one’s investments, and it certainlyisn’t good for the economy if it discourages new investment and prevents people from shifting existing investments into more productive uses, but it’s very effective as a strategy for individuals to protect against excessive taxation.

We see something quite similar with cigarettes. People can simply choose to buy fewer smokes.

Michel Kelly-Gagnon of Canada’s Montreal Economic Institute explains why higher tobacco taxes are not a guaranteed source of revenue for the political class.

Tax increases do not in each and every case lead to increases in government revenues. …When taxes on the consumption of a good are too high, you can get to a point where taxable consumption decreases and government revenues diminish rather than increase. Or at any rate, they don’t increase as much as what would be expected given the tax increase. This phenomenon constrains government’s ability to levy taxes. …There have been numerous examples in Canada of excessive taxes having a negative impact on government revenues. As shown by my colleagues Jean-François Minardi and Francis Pouliot in a study published last January ., there’s been three “Laffer moments” when it comes to tobacco tax revenues in Quebec since 1976. Whenever the level of taxation exceeded $15 per carton, the proceeds of the tobacco taxes eventually diminished. These are no isolated incidents. Laffer shows that the theory is confirmed by the experience of Cyprus, Denmark, Germany, Great Britain, Greece, Ireland, Latvia, Portugal, and Sweden.

Here’s a chart from his column showing how tax revenue has dropped in Quebec when the tax burden became too onerous. Michel then acknowledges that some people will be happy about falling revenue because it presumably means fewer smokers.

But that’s not necessarily true.

While it is true that some people are deterred from smoking by tax increases, this is not the case of all smokers. Some avoid taxes by buying contraband cigarettes. Tax increases have no effect on the health of these smokers.

And because the tax burden is so severe, the underground economy for cigarettes is booming.

The folks at Michigan’s Mackinac Center have some remarkable and thorough estimates.

Since 2008, Mackinac Center for Public Policy analysts have periodically published estimates of cigarette smuggling in 47 of the 48 contiguous states. The numbers are quite shocking. In 2012, more than 27 percent of all Michigan in-state consumption was smuggled. In New York, almost 57 percent of all cigarettes consumed in the state were also illicit. This has profound effects on the revenue generated by state (and sometimes local) government. …We estimate nationwide revenue losses due to cigarette smuggling at $5.5 billion, a statistic consistent with the Bureau of Alcohol, Tobacco, Firearms and Explosives’ $5 billion estimate for 2009.

Here are the numbers for each state. If all this evidence isn’t enough for you, I also encourage a look at the impact of higher tobacco taxes in Ireland, the United States, and Bulgaria and Romania.

Heck, even the city of Washington, DC, serves as a perverse role model on the foolishness of over-taxation.

P.S. Since this column focuses on the Laffer Curve and tobacco taxation, I would be remiss if I didn’t point out that Art Laffer recently put together a Handbook of Tobacco Taxation – Theory and Practice.

P.P.P.S. I’m currently in Australia for a series of speeches on fiscal policy. But as you can see from this photo, the PotL and I managed to find time to act like shameless tourists.

P.P.P.P.S. Since I’m imitating Crocodile Dundee in the photo, I should close by noting that Paul Hogan (the actor who played Crocodile Dundee) has beenharassed by the Australian tax police.

TOPICS: Business/Economy; Culture/Society; Editorial
KEYWORDS:
1 posted on 08/20/2014 1:00:37 PM PDT by Kaslin
[ Post Reply | Private Reply | View Replies]
To: Kaslin
I just planted fall tobacco. No-one gets a red cent in taxes as it's all for my own use. Legal as church on Sunday.

When tobacco taxes dry up, legislators just go looking for something else to tax.

I planted a crop of e cigarettes

Yes, the economy’s being totally f*cked by Obama, but that’s really not the issue - at least, not to him.

It’s all about Marxist control of the people, his lifeblood.

Explains the only reason the government wants to ban eCigs.

better idea: stop subsidizing tobacco and everything else