Navigation: use the links below to view more comments.
first previous 1-20, 21-26 last
To: Kaslin

Hey, he did say he was flexible. More like jello. I wonder about his attitude in playing golf. Does he play to win or escape?

After checking to make sure it was actually THE Chuck Norris who wrote the piece I thought that it would be good if O took a course at the Hoover Institute under General Mattis who is writing a book on leadership and strategy. Mattis will at least give O a new vocabulary. Don’t know if Mattis’ view of leadership would include a section on asking Jarrett if it is okay to shoot.

I think we agree that the analysts who cite incompetence rather than ideology and character flaw as the inciting fact explaining the Obama administration miss the mark and dangerously mislead the people. It is unfortunate because it leaves open the siren of the left, this time we have the right socialist to make it all better, in fact, we have a new Messiah to do socialism right this time.

This time the Democrats got the Messiah they wanted, they got the ideologue that satisfied their base, they had their Congress firmly under control, the media would have handed them the world merely for the asking, history had broken the economy for them, and Obama entered office with 68% support or better. Yet it has all turned to ashes in reality if not in the minds of the faithful.

You point out how difficult it is to get a message of reality out past the media barrier and with Barack Obama it has been doubly difficult because he has been so firmly protected by his race. After the staggering election losses of 2010, only an ideologue would have stood by policies that it cost him the House of Representatives as Obama did. Clinton, also a narcissist but not an ideologue, reversed course, at least superficially so. That the country would reelect Obama in 2012 demonstrates the truth of your observation of the difficulty in carrying the message against the media as well as the ideological fervor which animated Obama and his faithful.

Obama is dangerous because he is an ideologue. Such a man is not likely to get us into a war through inadvertence but through dedication to a calculus we do not share but which motivates him at his core. 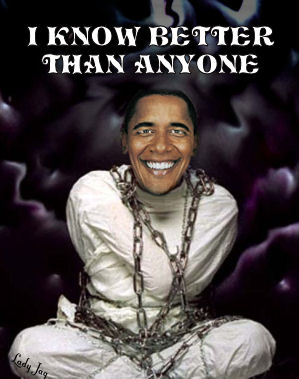