On Sean Hannity’s Fox News show on February 19, guest Anne Coulter and Hannity got into a heated discussion about the nature of the Tea Party on its fifth anniversary. While both are Tea Party supporters, Coulter differentiated between “people in America who call themselves Tea Partiers [who] are fantastic” and the “con men and scamsters” who “trick good Americans into sending them money, claiming we are fighting for you and they aren’t fighting for you.”

Coulter said that everyone has “got to read” Thomas Sowell’s column, “Cruz Control,” published on Feb. 18, in which the prominent conservative economist and author criticizes Ted Cruz for weakening the Republican Party in order to remake it as a more pure conservative party in the long term. Sowell argues that such a strategy may bring America past the point of no return with respect to both Obamacare and the larger erosion of personal freedoms. She also pointed out that groups that attack Republicans would face less media scrutiny than groups that attack Democrats.

When Hannity asked why the Republicans could not force the issue on the Keystone pipeline, the debt ceiling, and a host of other issues, and implied that the GOP had given up the fight, Coulter replied, “Fight to give them a majority then we will repeal Obamacare and have the keys to the pipeline.”

I agree with you. Reagan is my hero but he was despised by many of his fellow republicans. I also agree that the fight is between the entrenched DC versus US. I will gladly vote for any true conservative that has a chance to win, but if I can’t have that, then I think it is still better to accept the lesser of two evils. It is a marathon, not a sprint.

A very long marathon at that! However I can no longer accept the “lesser” of two evils. Evil is evil and I believe it is high time to stop rewarding it.

I think all of our hearts are in the right place. And yes, the marathon is getting old. I cast my first presidential vote for Ronald Reagan while still in high school and have not seen anyone like him since. It was heart warming to see the huge crowds that lined the highway for his funeral procession.

We are of the same voting generation.

We must agree to disagree on tactics, but unlike so many GOPe, I hope we each can remember we’re on the same side.

Sure we will...didn’t we already try that once?

106 posted on 02/21/2014 7:26:25 AM PST by gogeo (If you are Tea Party, the Republican Party does not want you.)
[ Post Reply | Private Reply | To 1 | View Replies]
To: JRandomFreeper
“Your liberal republicans are giving Obama everything he wants without a fight. That's why they have to go.

And your republicans aren't moderates. They are liberals that pass bills that Nancy Pelosi wants passed.

0bama is getting everything he wants because the votes to stop him do not exist. A democratic controlled senate and presidency (along with support from the liberal media) can and does block anything conservatives may try and advance.

If your car is broken because of a bad water pump you can't fix it by replacing the radiator, or a belt or the air filter. You have to replace the broken component.

If you want change than you have to give Rand Paul or Ted Cruz votes in the House and Senate. You have to give him a President who will sign conservative legislation.

Sun Tzu: Know your enemy. The enemy is radical liberals. “Weak”, wishy-washy republicans are potential allies to manipulate and give us a majority so Conservative leaders we both can agree upon can lead the country. Give Rand Paul the votes he needs.

Not going to vote for any liberal republicans. If Cornyn somehow wins the primary, he still won't get my vote. He has to go.

“Weak”, wishy-washy republicans are potential allies to manipulate and give us a majority so Conservative leaders we both can agree upon can lead the country. Give Rand Paul the votes he needs.”

Well said. Example of “weak” republicans being persuaded - Bush picking Harriet Myers for the Supreme Court. The grass roots rose up and beat that back. Did any Democrats listen when conservatives tried to stop Democrat supreme court picks? No, of course not. Whether Republicans or Dems are in charge, they know that they are accountable to their base. So why would we want Harry Reid in charge? We don’t just vote for our individual Senator, we also vote for control of the Chamber.

I just don’t see how it is good to let the country veer further left.

We need a lot more people like Ted Cruz in Congress

“When the GOP has had the majority, they haven’t done anything conservative with it. Last time, they spent like drunken sailors.

Not going to vote for any liberal republicans. If Cornyn somehow wins the primary, he still won’t get my vote. He has to go.

I afraid the country has veered “sharply” to the left since the last time the republicans were in control. But I guess you are OK with the changes 0bama has made. No need to worry about what the Democrats are going to do next; in your mind it is the Republicans who need to be stopped...

MAN!! WAKE UP AND LOOK AT THE BIG PICTURE!!

The Uniparty needs to be stopped

113 posted on 02/21/2014 9:31:42 AM PST by GeronL (Vote for Conservatives not for Republicans!)
[ Post Reply | Private Reply | To 112 | View Replies]
To: thejokker
I won't vote for your liberal republicans. Perhaps you should concentrate on getting conservatives nominated, instead of trying to get conservatives to vote for liberals.

Yes, it was the day that Judge Jeneane was on in place of Greta.

Predictable, yes. Amazing, not so much.

Not defending RINOS, wish there were a lot less of them. But the reality is, conservatives can’t field a team without them. 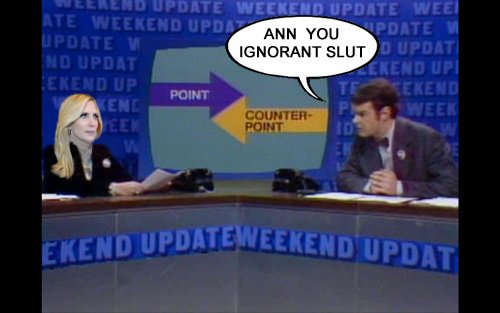