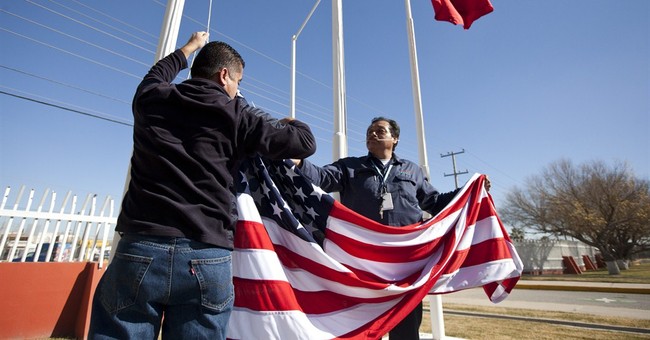 American Enterprise Institute scholar Mark Perry highlights what he says "might qualify as the chart of the century because it illustrates one of the most remarkable achievements in human history."

Perry also points to Arthur Brooks' commentary on why this is happening across the globe:

It was globalization, free trade, the boom in international entrepreneurship. In short, it was the free enterprise system, American style, which is our gift to the world.

I will state, assert and defend the statement that if you love the poor, if you are a good Samaritan, you must stand for the free enterprise system, and you must defend it, not just for ourselves but for people around the world. It is the best anti-poverty measure ever invented.

That's not to say there isn't a long way to go in making progress on global poverty - not to mention poverty in the United States - but it's important to recognize how far we've come in the last fifty years.

I spoke with Zack Beauchamp on Bloggingheads.tv on this exact topic. In our 2013 round-up video, he highlighted this trend and said that 2013 was likely the best year in human history:

“Globalization” is Marxist in nature, not American free enterprise. That’s why slavery is more prevalent around the world than at any time in human history (30 million at last estimate).

And the nation that made it possible is the number one most hated, most mocked, most reviled, most attacked nation in the world. We’re “the great Satan.”

And also the one that is inundated by millions of people who want to get here, legally and illegally.

The millions that “want to get here” nowadays are in it for the freebies, not like the people from before that want to work to get ahead in life. And some are in it to help take the USA down.

...the nation that made it possible is the number one most hated, most mocked, most reviled, most attacked nation in the world. We’re “the great Satan.”

The natural condition of mankind is slavery and poverty. The Founding Fathers created a system to change that. For this they will be forever reviled among the leaders of the world. I really fear a return to Dark Ages II.

The Popular Front of the Communist International has always been a corporate sponsorship. Marxism is merely the pitch; fascism is the reality.

I think the discovery of antibiotics is the most important.

Before them, 9 out of 10 people died from infectious disease. Now only 1 out of 10. That is why heart disease and cancer are now the leading causes of death.

We’ve offshored so many industries, which does indeed raise the standard of living in other countries, that now we are in danger of becoming so weak that we can no longer defend freedom.

We don’t owe anything to China. Their overpopulation problem is not our problem. I’m not opposed to helping them some. But now they are challenging us militarily. I think we’ve overdone it.

We need to raise them import tariffs and restore our own industries and economy.

But libtards are so brainwashed by Marx's exploitation theory, that they believe that with the free enterprise system, the rich capitalists exploit the poor wage earners, so free enterprise has to be destroyed.

Agreed with anesthesia a distant second

12 posted on 01/04/2014 1:49:21 PM PST by MattinNJ (It's over Johnny. The America you knew is gone. Denial serves no purpose.)
[ Post Reply | Private Reply | To 8 | View Replies]
To: Kaslin
Matthew 26:6-13
While Jesus was in Bethany in the home of Simon the Leper, a woman came to him with an alabaster jar of very expensive perfume, which she poured on his head as he was reclining at the table.
When the disciples saw this, they were indignant. “Why this waste?” they asked. “This perfume could have been sold at a high price and the money given to the poor.”
Aware of this, Jesus said to them, “Why are you bothering this woman? She has done a beautiful thing to me. The poor you will always have with you, but you will not always have me.

I think Jesus knew what he was talking about. We won't EVER eliminate poverty, hunger, etc.
What makes us great, I think, is that we keeping TRYING to eliminate them.

Thanks for posting this great news!

14 posted on 01/04/2014 1:59:42 PM PST by grundle
[ Post Reply | Private Reply | To 1 | View Replies]
To: Kaslin
I think abortion has had a lot to do with this. From the 1950’s on, legalized abortion has been gaining footholds throughout the countries of the world - countries that sold their souls for material wealth, to live/feel better no matter what the cost, spiritually - hedonism.

Abortion is a temporary fix to material poverty. As it continues in time, abortion increases financial poverty as we are beginning to forecast and even witness in many countries now (i.e. China, USA, UK, etc). Other evils begin to attempt to compensate for the unnatural imbalance.

It only stands to reason that trading God's blessings for hedonism will result in complete spiritual and material disaster and moral bankruptcy. With abortion, euthanasia, infanticide, healthcare rationing, assisted-suicide, and all the sexual perversities, being the rule, rather than the exception, we can be sure that we are a long long way from reconciliation.

As we stew in our decadence, denying God, the Holy Spirit will retract from restraining the forces of evil and the whole world will suffer...and justifiably so. God does not bless the unrepentant. This is all part of (as foretold in the Holy Bible) the end times and...we are almost undeniably in them.

The reason we will always have the poor among us is that we won't keep His Law. We are sinners, to repent, take up the task in faith, to be sealed from G_d's punishment and be forgiven.

18 posted on 01/04/2014 2:54:08 PM PST by JohnBovenmyer (Obama been Liberal. Hope Change!)
[ Post Reply | Private Reply | To 1 | View Replies]
To: Carry_Okie
Deuteronomy 15:4 However, there should be no poor among you, for in the land the Lord your God is giving you to possess as your inheritance, he will richly bless you, 5 if only you fully obey the Lord your God and are careful to follow all these commands I am giving you today.

Note the word SHOULD, which, in my book is conditional, nothing more or less. SHOULD--not "MUST."

The reason we will always have the poor among us is that we won't keep His Law. We are sinners, to repent, take up the task in faith, to be sealed from G_d's punishment and be forgiven.

Silly old me I thought that poverty came from such things as:

But, what do I know?

What makes us great is that we KNOW we can’t eliminate poverty but we STILL keep trying to do so. That is what I meant.