While news on the 3D-printed gun front has been sparse as of late, that's less a matter of stalled development than of the new technology already becoming old hat in this fast-moving world of ours. How else to explain the lack of coverage even as repeating pistols are knocked out on desktop equipment? Consider, for example, the Hexen pepperbox, which has stainless steel liners for its six barrels and is undergoing constant strengthening and improvement as discussed over in the DefCad forum. The video below shows the Hexen successfully fired (actually, it appears to be a related five-shot model), using 6mm Flobert (low-powered .22) ammunition.

The designer, Franco, even printed ammunition holders for the pepperbox, along with a tool for ejecting expended cases (both pictured above).

The video below shows an animated breakdown of the Hexen. You can see the inner workings of the gun, as well as the steel liners for the barrels.

In just a few short months, 3D printing of firearms has gone from a lower receiver, to a single-shot pistol to a rifle to a pepperbox repeater. All of this development has been pursued and achieved by activists and enthusiasts without institutional backing.

Let the wailing and gnashing of teeth by control freaks left in the dust commence.

No need for rifling, as the design is inaccurate beyond 10 meters.

Reasonable that advanced design work is being done overseas, where it is needed the most. 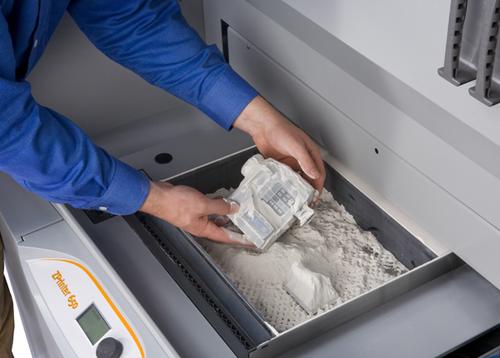 Political power grows out of the nozzle of a 3-D Printer.

And a Speaker of the house...can they print in tan?

Did they ever resolve the issue with the feds trying to shut them down claiming they were violating some obscure law about exporting weapons technology by putting these out onto the internet?

I’m not really into printing a 3D gun myself but I am fascinated by the people who are. One guy does this and another guy improves on it and another guy goes in a different direction. With the aid of a 3D printer you can put your ideas into an actual working model. I think good things will come as these printers are more common and they will undoubtedly improve also.

5 posted on 09/13/2013 11:24:55 AM PDT by Lurkina.n.Learnin (If global warming exists I hope it is strong enough to reverse the Big Government snowball)
[ Post Reply | Private Reply | To 1 | View Replies]
To: marktwain
The comic strip "Brewster Rockit" has had a series of comics this week on 3D printing.

The enemy hacks the 3D printer on the RU Sirius and generates killer robots. Then, the printer "jams". You can imagine what that looks like.

A remote-hacking war ensues, escalating to pies in the face, and finally printing a "bomb". I won't ruin the punch line on that last one.

NASA has tested a rocket engine thrust chamber that was produced by a 3D printer. It worked.

7 posted on 09/13/2013 11:36:41 AM PDT by Farnsworth ("The people have always some champion whom they set over them and nurse into greatness...This and no)
[ Post Reply | Private Reply | To 1 | View Replies]
To: Lurkina.n.Learnin
I think good things will come as these printers are more common and they will undoubtedly improve also.

I think we are on the edge of another revolution, like the open source software revolution that created Linux, and all the derivatives. I don't think people realize just how much open source software has pervaded their life, but it has enabled smart devices that would have been impossible at a reasonable cost if each company had to develop software from scratch or license it from the likes of Microsoft.

Open source hardware designs are the next frontier. With relatively low cost tools and a moderately powerful laptop or desktop computer, you can design and create objects yourself. You can start from nothing, start with an open-source design, or license one from someone else.

As 3D printers become more capable and can use more materials, anyone can manufacture objects. If you don't have a 3D printer, there are already services to print and even distribute objects for you. It's mostly used for jewelry now, but I think that will change.

That link.... !!! They called for a bomb, not a weapon of mass destruction! Far too severe of an object created. (Though admittedly, I would have had it simply print out the script...)

9 posted on 09/13/2013 12:54:53 PM PDT by kingu (Everything starts with slashing the size and scope of the federal government.)
[ Post Reply | Private Reply | To 6 | View Replies]
To: justlurking
"I don't think people realize just how much open source software has pervaded their life"

That's for sure... literally in the billions.

Millions of servers and devices running the Web/Cloud, (65% of Web servers), use the LAMP stack (Linux/Apache/MySQL/PHP-Pearl) and most of the security device kernels (routers, etc.) are based on some form of Linux. Plus Android and most programmable devices/controllers are based on Linux.

While not open source, Apple's PC and mobile OSs are based on an open source Unix derivative (BSD from NeXT).

The video firing, it looks like it has a nice sting...

The First 3D-Printed Gun Is Already in a Museum
http://gizmodo.com/the-first-3d-printed-gun-is-already-in-a-museum-1315969889