Two Texans that police say were caught trying to free mink from a Sioux City mink farm will faces multiple charges at a court hearing this week, but attempted burglary is not currently one of them.

Marshall and Vanorden, both of Austin, were arrested on charges that included a felony count of attempted second-degree burglary. However, court documents state those charges were not approved "at this time" at an initial appearance on Oct. 10.

Both are slated to have an initial appearance Thursday in Sioux City.

They still each face a charge of possession of burglar's tools, a misdemeanor, and a charge of second-degree criminal mischief, a felony punishable by up to five years in prison. Vanorden also faces a misdemeanor charge of carrying a weapon.

Sioux City police said investigators believe Marshall and Vanorden are animal-rights activists. An official with the Woodbury County Jail said both were being held Saturday in lieu of $5,000 bail each.

According to court documents, Marshall and Vanorden cut an exterior fence at a mink farm on Memorial Drive and then used bolt cutters to cut several holes in a chicken-wire fence. Officers reported in the documents of finding maps, hiking equipment, police scanners, a machete and more than $700 cash in a vehicle parked next to a gate at the property.

It is unclear if any mink got loose. Sioux City police initially said none of the animals got loose, but on Friday said some mink may have escaped briefly before they were recaptured.

In all seriousness, these idiots should be strung up.

Mink Are On The Run, And The Fur Is Flying British Animal-rights Activists Freed 6,500 On A Farm. The Mink Are On A Deadly Spree Against Other Animals.

CROW HILL, England — In what must have seemed like a brilliant idea at the time, British animal-rights activists sneaked onto the grounds of a mink farm here during the weekend, cut through wire fences, and gave 6,500 mink their freedom instead of a future as fur coats.

But the illegal act has backfired as few British animal liberation missions ever have. Released into the rich countryside of England's southern coast, the thousands of mink have gone on a rampage driven by insatiable hunger and equally insatiable curiosity.

Domestic pets and farm animals - including cats, hamsters, chickens, guinea pigs and hens - have been pursued and killed by mink. Wild animals - including the endangered water vole, a type of water rat - are under attack by them. Local fisheries are threatened.

And local residents, including the owners of a wild-bird sanctuary where three birds were killed in mink attacks Sunday and Monday, have taken up arms. One of the dead birds was a beloved 14-year-old kestrel named Spitfire who made countless educational trips to local schools.

The bird sanctuary ``has become a restaurant for mink,'' said angry sanctuary manager Chris Milsom, who has armed himself with a shotgun to join other residents on mink hunts. Yesterday, Milsom showed the results of his latest foray: He upended a plastic grocery bag, and five small, brown, furry and very dead mink fell onto the ground.

A group called Animal Liberation Front is believed responsible for the mink release from the Crow Hill Farm, although no one has stepped forward to formally claim the action.

Robin Webb, the group's press spokesman, yesterday defended the release - even though hundreds of the freed mink are being gunned down by locals or run over by cars. Hundreds of others have been returning on their own to the mink farm, though about 3,000 were believed still on the loose yesterday.

``Certainly some people may disagree with it, but the mink which have been shot and killed, had they remained where they were, they would have been killed in a barbarous manner to make fur coats which nobody needs,'' Webb said.

Webb said the released mink could be expected to ``disperse'' among an existing British wild mink population already numbering in the tens of thousands. Those wild mink are the descendants of earlier fur-farm escapees imported from America to England by mink breeders in the 1920s.

But rather than mixing with local wild mink, the newly freed mink seem to have minds all their own.

Several have wandered nonchalantly into local homes, including that of Crow Hill resident Christine Pinder. She was shocked on Saturday morning when a mink - which she at first thought was a kitten - appeared in her bedroom and jumped at the throat of her pet dog.

``I took my husband's walking stick, and I whopped it,'' she said.

Other mink have walked into a local 17th-century pub, the Crown Tap. Pub-goers unsuccessfully gave chase.

In the charming, thatched-roof village of Burley Lawn, resident Ed Gurd was alarmed on Sunday to find a mink inside his house intently studying the cage of his daughter's pet hamster, Honey, as if it were contemplating lunch.

Those who freed the mink, Gurd said, ``are totally irresponsible because of the destruction they're causing of the local wildlife.''

Britain has seen many animal-rights actions in the past: Wild cats have been released from Scottish zoos; the export of British veal has been blocked at French ports; even domestic salmon have been freed from Scottish fish farms.

But few actions have upset the British as much as this one. ``Wanted Dead or Alive: 3,000 Vicious Killers,'' said the headline in yesterday's Daily Telegraph.

But on Terence Smith's vandalized mink farm, the mink seemed less vicious than energetic and curious - several scampered around the feet of television crew members as Smith regarded his situation wryly.

``I feel like Tom Cruise,'' said the white-haired Smith, pointing at waiting cameras and reporters. ``Except I haven't got his looks.''

Officials and police were advising residents in the Crow Hill area to keep small domestic pets indoors - though they were quick to assure locals that children are safe from mink attacks unless they grab at the long, thin animals, which have sharp teeth. Although most of the released animals are young, mink can grow to 30 inches long.

The greatest threat from the rampaging mink has so far been to the gentle, bank-dwelling water vole. County Hampshire, where the mink farm is located, is one of the last remaining habitats of the vole.

The vole is ``the fastest-declining animal in the United Kingdom - probably faster declining than the white rhino or tiger,'' said conservation officer Ian Davidson-Watts of English Nature, the government's nature conservation advisory group.

Thousands of mink released at one time in the voles' area can be devastating, he warned, especially since the mink are just the right size to slide down vole holes.

``And what we have is a situation now with thousands of mink running around, desperate for food,'' he said. 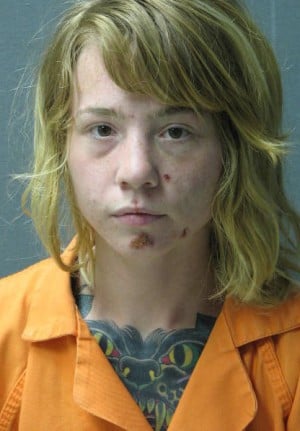 They don't come much guiltier than this. Kellie Rose Marshall and her accomplice Victor Vanorden were also arrested in Oct 2011 in Iowa trying to free mink form a mink farm there. Tells me thay're both dumb as sh!t. They both are unwilling to learn, and that neither of them has any respect for anyone else's property. In short two perfect 0bama voters.
3 posted on 09/10/2013 10:51:47 AM PDT by from occupied ga (Your government is your most dangerous enemy)
[ Post Reply | Private Reply | To 1 | View Replies]
To: oxcart

The Prosecution is pulling strings to help the criminals.

Seemed like a go idea after smoking crack and dupies for 3 days.

Why are you posting this nearly 2 years after the article, when there’s no update???

The vole, a nasty first cousin to a mole, I would not consider a great loss.

Looks like Vic ended up only serving 3 months. http://www.arprisoners.org/victor-vanorden-2/

They both clean up well, and have a nice Nazi support system that pays the legal bills.