Welcome to the home of the Virtual President of the United States (V-POTUS).

The Virtual Presidency is a rhetorical device used to introduce common sense into modern American politics.

During the next few weeks and months, this website will be in a state of constant growth.
We'll continue to add new features, including...a shedule of speaking engagements... 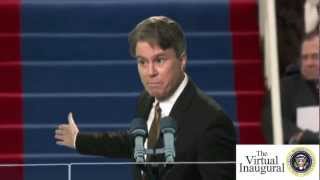 Will it work? How can we help?

Here are some of **my** thoughts on how we can best help Bill Whittle
in his quest to restore the traditional conservative values
which made this country great.

"Politics is downstream from culture."

"Like all cultures, we get our values and morality from our mythology – and in 20th and 21st century America,
our mythology mostly comes to us through the movies."

"For a fantasy story to be truly great, it needs a memorable villain...
...willing to violate accepted moral principles in order to accomplish their goals.

"What sets a hero aside from the rest of humanity is the
willingness to assume a personal responsibility for public problems."

In our current political environment, of course, we already have a villian (Obama) --
but until now, no one on our side has been willing and/or able to be the hero.

Perhaps Bill is just at the right place at the right time, or maybe it's a case of "opportunity meets preparedness."

In any event, it appears that Bill Whittle may soon "have greatness thrust upon him," by default.

The "alternative" media have been buzzing about his "fire-breathing" defense of traditional conservative values
during a short (but powerful) address to David Horowitz's Restoration Weekend last November.

Like Ronald Reagan before him, he energizes ordinary Americans by validating their deeply held beliefs
with his full-throated, and logically consistent defense of small government and private enterprise, wealth creation,
individual liberty, American exceptionalism -- and many of our OTHER traditional conservative values.

Today's release of Bill Whittle's "Virtual Inaugural" video marks the beginning of his two-year quest to "shadow" President Obama --
to go where Obama goes (figuratively) -- and do what Obama does (virtually).

His goal is to show the American people what they **could have** had, if they had elected a better President LAST time --
and to show the current "leaders" in our party how to effectively communicate our superior values NEXT time, if any will listen.

And if our current "leaders" will NOT listen, Bill may just have to do THEIR job for them, too. ;)
So, what do **you** think about Bill's plans?

might as well. most republican politicians won’t do anything other than support the dear leader.

CLICK HERE to see a list of the threads posted here on Free Republic
which have been marked with the keyword "billwhittle."

AD ASTRA VOLEMUS SELLA TONANTI
"Let us fly to the stars on a thundering chair."
(from www.ejectejecteject.com)

This particular 38-minute video is from the "Quesion & Answer" period following
one of Bill's traditional one-hour presentations to a local group of conservatives.

As we now know, like many of the top public speakers, Bill was using his time out "on the road"
to sharpen some of the ideas which he intended to use in his upcoming address at Restoration Weekend.

Most of us have experienced this: You’re in one of those bad dreams where something horrible has happened—
you wake up, and after you shake off the dream and the sleep and you realize that it was just a dream, you are so relieved.

Most have also experienced the reverse: You’re having a wonderful dream where something great has happened,
and then you wake up and discover it isn’t real. Not that your waking life is necessarily bad, but the dream was really nice.

About halfway through the video below, I thought to myself, “Oh no, this is going to be one of those things where by the end,
I will have become convinced that Bill Whittle IS the president, and then I will have to “wake up” and remember that Obama actually is.

A beautiful dream, a waking nightmare.

To understand what that means, you simply have to watch. And you should watch this video all the way through, because it is brilliant.
Whittle is amazing in his Afterburner and Firewall videos, but that amazingness could simply be scripted and well-delivered.

This is Whittle off the cuff, answering questions from a pretend press corps as if he were the president.

And it really is incredible to hear. 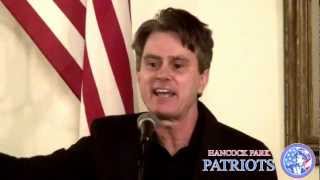 Bill Whittle takes questions as the "Virtual President"
at the first post-election meeting of the Hancock Park Patriots
on November 12. 2012.

He said that, as a liberal, Louis C.K. would probably be offended that Bill referred to him favorably.
(Personally, I had never heard of Louis C.K. -- since I don't watch much TV.)

It turns out that Louis C.K. was just voted by Rolling Stone magazine as the funniest man in America last year!

Louis C.K.
"Everything is Amazing, and Nobody's Happy"

In 2013, Louis C.K. is the Great American Comedian: our chubby, schlubby, ginger-haired conscience, id, and jester-in-chief.

He's a poet of existential malaise, but his signature standup bit, "Everything is Amazing and Nobody's Happy,"
extols the beauty of life and the magic of modern technology...

Do you take technology for granted or yearn for simpler times?
Kevin, Alex, and guest Gary Veynerchuk enjoy comedian Louis CK
as he explains to Conan O'Brien the ridiculousness and irony of it all.
7 posted on 02/06/2013 10:50:33 PM PST by RonDog
[ Post Reply | Private Reply | To 6 | View Replies]
To: doug from upland; ALOHA RONNIE; DLfromthedesert; PatiPie; flamefront; onyx; SMEDLEYBUTLER; Irma; ...

Outstanding!!!! Well worth the time to watch.

American people are dieing and imprisoned for lack of vision..
Bill offers a “vision”...

The evil will hate it, the good will love it..
Will be easy to see which is which..

And they should be dealt with accordingly..

10 posted on 02/06/2013 11:23:21 PM PST by hosepipe (This propaganda has been edited to include some fully orbed hyperbole..)
[ Post Reply | Private Reply | To 1 | View Replies]
To: RonDog
This should be good, especially if it's as popular as Hussein's *virtual skeet shooting* picture. Outstanding!!!! Well worth the time to watch.

I thought so, too!

The Virtual President outlines the three essential qualities
needed for the Pursuit of Happiness in Modern America,
and sets a challenge to free entire generations of Americans.

Get all the updates from the Virtual President at http://www.mrvirtualpresident.com
and special notes and commentary at http://www.facebook.com/pages/Bill-Wh...

American people are dying and imprisoned for lack of vision..

You got THAT right!

Here is a nice summary of the video that blasted Bill Whittle's "Virtual President" concept deep into the conservative blogosphere.

Bill's hard-hitting 15-minute address at Restoration Weekend really resonated with the "base" of the Republican party...

...who have grown weary of the squishy "establishment" Republicans inside the Beltway, who often sound like "Democrat Lite."

From The Dryer Report:
If We Had A Conservative In The White House

If we had a conservative in the White House the attacks in Benghazi might be dealt with
in a different manner. In fact the events throughout the world might be seen in another light entirely.

Bill Whittle who is a Los Angeles-based Writer/ Director and Pilot who writes about America,
history and conservative values, was speaking before a conservative audience at a David Horowitz Benefit Dinner.

In his speech to the gathered conservatives Mr Whittle explained how most of the Republicans in elected office
can not explain their conservative positions because the largely do not believe in those principles.

And as they do not believe in these principles they can not articulate them to the American people at large.
Mr. Whittle has a valid point here.

Because when he articulates a conservative position on the attack on the Benghazi consulate
it is so much different from what has been heard that it almost sounds foreign.
It is so refreshing that one’s ears perk up and you tend to actively listen and actually imagine the what if...
...what if there was a true Conservative in the White House in present day America?

My how much different the world might be.
We have time to make this a reality and really elect a true conservative into the White House.

But why stop there?
Why not put true conservatives in the City Halls and Governor’s mansions throughout this Nation.

Time to feed the Google-bots. ;)

He must be positive to have a positive effect..
But I prefer the negative with the positive..
But not a winner when dealing with Rinos and democrats..

I like him trashing BOTH parties.. gleaning from both..
America needs another party.. of whatever name..
and if not a party then a Caucus..

Could be parties are obsolete.. I wish he would say that...
Using the name FREEDOM Caucus..

I haven’t figured out why this guy doesn’t get more notice. Maybe he makes too much sense.