PHOTOS: Chick-Fil-As Across The Country Are Absolutely Jam-Packed Conservatives are lining up in droves. Former Republican presidential candidate Rick Santorum is offering his support and urging supporters to visit a restaurant. One Wendy's franchise owner expressed his support for Chick-fil-A at a North Carolina Wendy's.

Chick-fil-A originally incurred a backlash when COO Dan Cathy affirmed in an interview that the company did not support gay marriage.

Some mayors around the country — including Chicago Mayor Rahm Emanuel and Boston Mayor Thomas Menino — have publicly supported the boycott of Chick-fil-A.

According to its Facebook event page, more than 630,000 people planned to go to Chick-fil-A today.

“Tomorrow, MSM will be running this headline:

But seriously, I swung by our nearest Chick-Fil-A at lunch time today and the cars were backed up into the nearby Interstate exit waiting to get to the restaurant. So I gave up on my attempt to pick up lunch there as I had too much work waiting for me back at the office. I’ll try going back in a bit to show my family’s support.

By the way, does anyone know if there are massive lines of people and cars trying to get into Chicago and Boston to show their support of those cities?

I plan to go Friday too.

People make that mistake all the time, looking to write off places where a majority are liberals.

California has about 40 million people. In the last presidential election, 40% voted Republican. Extrapolate that out to the general population and there's about 16,000,000 Republicans in California. Hey alice,
just for shits and giggles,
write your govenor a letter asking for a gub mint loan to start one in your state.
I think you’d do real well as the owner of a Chick Fil A

At the last minute I couldn’t get there today...it was JAMMED and I couldn’t afford the time.

SO....I am now planning on late Friday. The Gadsden will be on the car.

I will have my camera. 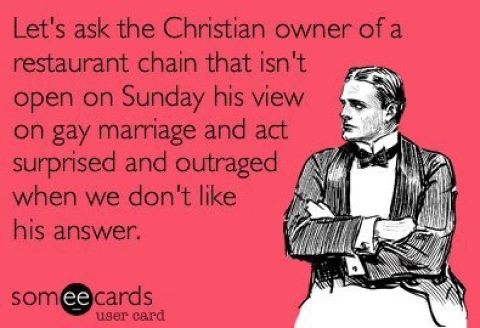 I went to the one south of the 101 off of 27th Ave today. The place was packed. Cars coming in from 3 directions, line clear out the door into the parking lot. It was probably a 2 to 3 hour wait to get in. It’s hot and humid. People were passing out water, smiling, laughing and proud that so many came out in support. I’ve got some pictures but never have learned how to post them. ;-(

Not to worry. I was there in Erie. Packed there as well. :-)

Can we get all 16 million to move to swing states? Please?

Hey, MSM. President Obama. Rahm baby. All of you homos:

Keep the pictures coming, they are great! I hope to give it a try tonight in Chandler AZ.