The indigenously built stealth warship `INS Sahyadri' was commissioned on Saturday into the Indian Navy, adding to its anti-submarine warfare capability.

The frigate, last in the series of stealth warships after `INS Shivalik' and `INS Satpura', was commissioned by Defence Minister A. K. Antony at the Naval dockyard in Mumbai in the presence of Navy chief Admiral Nirmal Verma and senior naval officials.

INS Sahyadri is the last warship of`Project-17' undertaken by the Navy. The first two in the class -- INS Shivalik and INS Satpura - were commissioned in April 2010 and August 2011, respectively. These ships have been performing various tasks in the Indian Ocean Region.

The 4,900-tonne INS Sahyadri is equipped with some of the most advance surface and air-to-air missiles and can carry two helicopters - a mix of Dhruv, Sea King or Kamov - onboard for various missions.

Along with the capability to launch offensives against enemy vessels, the warship is equipped with advanced electronic warfare capabilities and torpedoes to detect and neutralise enemy submarines.

The frigate will also carry BrahMos anti-ship cruise missiles. Designed and built by Mazagaon Dockyard Ltd here, the keel of INS Sahyadri was laid in March 2003 and it was taken out for sea trials earlier this year.

The warship will sail with a complement of over 250 officials, including 35 officers, and can attain a speed of over 30 knots. It has an advance sonar and radar system to keep an eye on any enemy movement in deep waters.

Nine years from keel to delivery? I guess that's better than their tank program.

2 posted on 07/29/2012 6:58:56 PM PDT by PAR35
[ Post Reply | Private Reply | To 1 | View Replies]
To: JerseyanExile
Very sleek and efficient looking. 5k tons and willing to post 30 knots. This is a Destroyer sized and armed type ship that can probably turn 33+ knots when really pushed by a dedicated snipe crew. Is this a one screw or two screw ship? Can't really tell from the pic of the fantail. Guess I'll goggle her sister ships.

At first glance I'd have to say congrats to the Indians.

Please don’t forget to drop your thanks to GE to delay delivery of LM2500 powerplant for ships thats upto 2years.

Hell, during WW2 the P-51 Mustang took, lets be fair, about 2 years to design and build, and another 2 to really impact the war. USS Laffey took less than a Year to build and field.

So the Modern Day shipbuilding is nothing compared to what it once was.

Interestiing posts from The Hindu and Broadsword. The Hindu lists the Saptura at 6200 tonnes. Twin diesels and LM2500 turbine plants. Broadsword posts have many comments from Indian folks. Seems they are none too happy with Obama’s State Dept ordering GE to ban/delay key turbines prior to Shivalik’s sea trials. Apparently led to a 2 yr time setback starting in 2009.

The media LOVES to call things “stealth” - it’s got a little bit of shaping but it’s hardly a “stealth frigate.”

Yeah, it looks modern for sure but far from stealthy...

Stealth in the middle of the ocean does not share the same requirements as stealth in air / on land where a sufficiently long direct line-of-sight is often available.

India is a great country and a potential world power - and she’ll have to be to deal with Pakistan, and, worse, China. 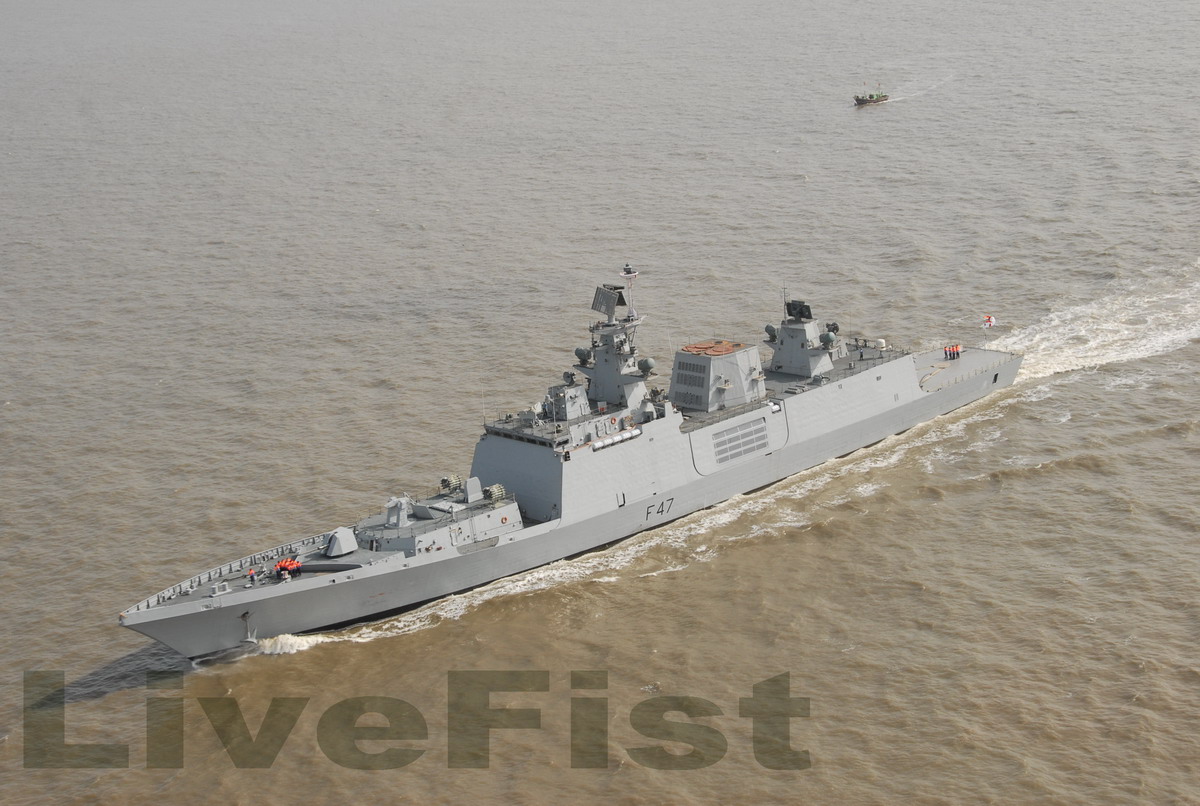 The Project 17 ships carry their SSMs Vertically launched from the forward deckhouse and the short ranged SAMs (equivilent to the HQ-7) are Israeli Barack-1s fired from vertical launchers on either side of the hull just abaft the stack.
The launcher on the forward deckhouse is a longer range (similar to the Euro Aster-15) 9M38 SAM missile, much bigger that the Chinese HQ-7 (Its warhead weighs alomst as much as the entire Chinese missile)

The Indian ship is a third heavier, faster, heavier weaponry, more radar, twice as many helcopters and really the closest thing to a Destroyer sized and armed type ship today.

11 posted on 07/29/2012 9:40:07 PM PDT by Oztrich Boy (Literals will believe anything.)
[ Post Reply | Private Reply | To 3 | View Replies]
To: James C. Bennett; miliantnutcase; Strategerist
Stealth in the middle of the ocean does not share the same requirements as stealth in air / on land where a sufficiently long direct line-of-sight is often available.

12 posted on 07/29/2012 9:44:19 PM PDT by Oztrich Boy (Literals will believe anything.)
[ Post Reply | Private Reply | To 9 | View Replies]
To: Oztrich Boy
Whoops, my mistake, I was trying to find another picture from a better angle and just grabbed one of the first pics from Google images. Here's the actual Shivalik class.

can i book a cabin with a window please?