The White House on Wednesday said President Barack Obama would unveil fresh ideas to jump-start the economy and cut deficits, but details offered so far appeared to be a compilation of old proposals.

Obama faces serious doubts among Americans about his economic leadership and is now trying to convince skeptical voters and Wall Street that he has a workable plan to keep the United States from dipping back into recession.

The White House said Obama will give a speech after the September 5 Labor Day holiday to outline measures to boost hiring and find budget savings that surpass the $1.5 trillion goal of a new congressional deficit-cutting committee.

According to senior administration officials, Obama will renew his call for Congress to extend a payroll tax cut -- a measure the White House says would encourage business to increase hiring but that economists say is likely to make little difference to an economy that is struggling.

The officials said Obama's plan also includes new ideas to accelerate job growth in the short term. The national unemployment rate is stuck above 9 percent, a major impediment to Obama's chances for re-election next year.

The official also said the growth package would include a mix of tax cuts and infrastructure spending as well as some measure targeted at the long-term unemployed. That would likely be a training and education plan.

What gets me is why wait until Sept? I know vacations, yet if they took it seriously?

It says right up front that so far it’s just the same old tired stuff. He hasn’t got anything. He’s just stringing people along (but fewer and fewer are falling for it.)

The guy is a pant load.

Silly Obama...HOPE IS NOT A 'PLAN'

The only HOPE is for when he is out of office. "We have a plan. And the plan is that the plan will be a plan that you can plan on and plan for.

No other plan does this, and no plan of my colleagues across the aisle does this. I plan to implement this plan and make this plan a plan you can plan on even if my opposition plans to oppose it. I will do this because it is a plan that will work.


That is the plan folks.

It’ll take him that long to come up with one!

It needs the correct atmosphere to unveil the plan.

For example, needs the crisis - we will all perish unless the plan is adopted. Don't want to ramp up the crisis till after martha's vineyard.

Also, the timing is crucial. When the crisis is ramped up to MAX, need to have the legislation waiting in the wings, with no time to read it, and no time for the press, public, tea-party, whomever, to see it. But, just enough time to give a small handout of its highlights (ie: talking points) to leaders.

Any bets on how many pages the corresponding legislation bill be? Choose:

Remember when the lib writers wanted to make Obama president in December 2008 rather than wait until inauguration day. In their minds, we just had to move on to the next stage since the work needed to begin to fix the problems with the new leadership.

I think we need to propose the same now. We just need to have Obama and his team move out now, and put another team in place. no need to wait 18 months of the same. We are at the point where there needs to be a national voice of ‘no confidence’ and move on in a different direction.

Remember how I used to tell the kids, “remember not having a plan IS a plan to do nothing” :) /sarc

The question is: will the networks, their noses STILL brown from burying their noses DEEP in Hussein’s backside, decide to give him another campaign commercial? 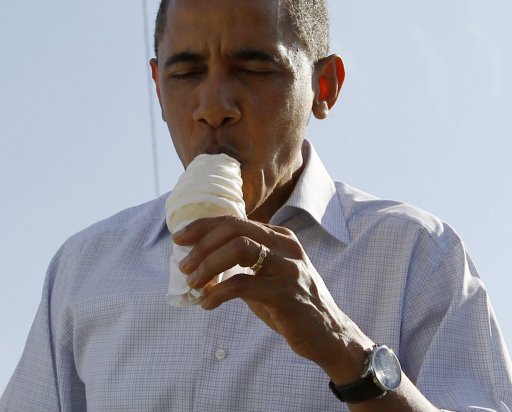 I think it is difficult for us to appreciate how important soft-serve is to this TOTUS.

A “major speech” on labor day?? ya that’s the ticket, who’s going to be watching

He needed to study golf and other aspects of living above his paygrade for about a thousand days, first.

Shouldn’t it be re-re-re-re- unveils?

is he smoking crack again?
this is to funny
i thought he might lose 45 states, but i think he wants to lose all 50.