The deal is projected to be worth more than $100 million, Ukrinform news agency reported Thursday.

Ukrspecexport SC, the Ukrainian state-controlled arms exporter, stated that its deal with Ethiopia's Defense Ministry for 200 T-72 tanks is one of its largest contracts since the company's establishment in the wake of the collapse of the Soviet Union in December 1991.

The T-72 tank was originally produced in the Soviet Union in the 1970s and widely exported to African, Asian and Middle Eastern states as one of the Soviet Union's premier weapons systems.

The Ukrspecexport SC export variant contains a modernized propulsion system, upgraded guided weapons and an improved armoring system of both the turret and the tank's battle chassis for improved battlefield survivability.

Ukrspecexport officials said they are hopeful that the size and the magnitude of the Ethiopian order will have major economic and social impact in attracting orders for the Ukrainian defense establishment. Even if immediate additional business isn't forthcoming, Ukrspecexport SC said it expects further orders for repairs and upgrades of the tanks supplied to Ethiopia.

Getting ready for the next famine I see.

Where in the HELL does Ethiopia find $100+ million to buy 200 hundred tanks? Was this part of the “Stimulus”?

No, but rather Eritrea for the greater part + the Ethiopian operations in Somalia where they really hammered the Islamic radicals a short while back.

They could be using them for mass transit. You could fit seventy Ethiopians in that tank. 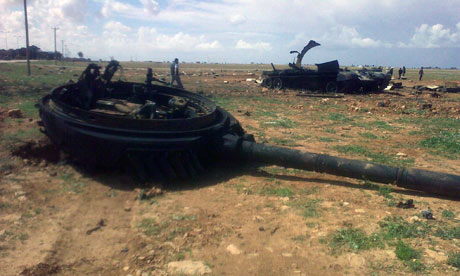 I wonder if there are many people on this forum who would want one at the bargain price of $500,000.

Don’t complain too much. They will mostly be using them to fight Muslims in Somalia and Eritrea.

I was thinking it would be the ultimate SUV. pretty poor gas mileage though, and a set of tires (or rather tracks) would set you back big time. OTO when the swat team came to “confiscate” your firearms, you could respond appropriately :-)

And, those Ukrainians are just crackerjack welders! Look at the way they modernized that turret and got rid of the shot trap. Look at that add-on sacrificial armor!

With that new diesel, those Ethiopians are well on their way to dozens of miles of care-free tank-motoring! I hope it's got AC ... and some kind of warranty program!

Not sure these chaps wouldn't be better off with 10 4WD pickups with a 106 recoil-less, or some WGATW mounted on the bed instead of 1 tank. 5 Muslim MFs with RPG's make unsupported tanks dog meat.

OTOH, these Russki tanks are just the ticket for urban crowd control.

200 sounds like a lot of Tanks—but if they want to take over and control areas these can do the job—just as long as you don’t fight with anyone who has a better army or better tanks. Fortunately there are few states in Africa who could match these armored vehicles (maybe Egypt?).

It's nice to know she likes a man with a tank.

http://www.fas.org/man/dod-101/sys/land/row/t72tank.htm — “In addition to production in the USSR it has been built under license in Czechoslovakia, India, Poland and former Yugoslavia.”

http://www.enemyforces.net/tanks/t72.htm — “Overall by Soviet Union, Czechoslovakian, Poland, Indian, Yugoslavian and Romanian plants there were built more than 30 000 of these main battle tanks.”

http://www.military-today.com/tanks/t72.htm — “The T-72 is protected by composite armor. Some sources claim that front armor of the T-72 is equivalent to 500-600 mm. Side armor provides protection against IFV and helicopter cannons. Later production models were fitted with side skirts.”

[flex fuel alert] http://www.militaryfactory.com/armor/detail.asp?armor_id=22 — “powered by a V-12 multi-fuel diesel engine that is capable of running on diesel, benzene or kerosene. For extension of maximum operational range, the T-72 can be fitted with two 200 liter drums which can be tactically jettisoned from within (if battlefield situations require it) or when empty.”

http://www.globalsecurity.org/military/world/russia/t-72.htm — “Using its 12.7mm NSV anti-aircraft machine-gun, it can destroy low flying targets. It provides protection against pressure wave and NBC weapons. Its main armament is a 125 mm smoothbore gun, stabilized in two guiding planes, with maximum effective firing range of 4,500 m and a rate of fire of up to 8 shots in a minute.”