Conservatives on Twitter reportedly kept a close watch on which users New York Democratic Rep. Anthony Weiner followed on the microblogging service and even discouraged some "schoolgirls" from forming a relationship with the congressman in the weeks before his admission of engaging in lewd online relationships with six women.

The New York Times published in its print editions Wednesday an article on the group that operated under the label #bornfreecrew.

The group's leader was the same user who discovered the lewd photo that Weiner mistakenly sent publicly to 21-year-old Seattle college student Gennette Cordova, the Times reports. The user was known as Dan Wolfe, which the Times reports is a false name linked with the now-defunct handle @PatriotUSA76.

"Weiner's new follow is a high school girl. LMAO! Freak!" read one post Wolfe published, according to the Times.

The Times talked with a bornfreecrew member who wasn't as discreet about his identity, Michael Stack, a 39-year-old New Jerseyan who uses the Twitter handle @goatsred. Stack said Wolfe once told him in a private message that Weiner followed the updates from adult film actress Ginger Lee.

Last month, Stack sent a 16-year-old California girl who wanted Weiner to escort her to her prom a message discouraging her from contact with the congressman.

"If you're a minor and he's following you, well, seems a little creepy if not in ny," the message read, according to the Times.

Stack copied Weiner on the message. The girl posted the next day that Weiner unsubscribed from receiving her updates. 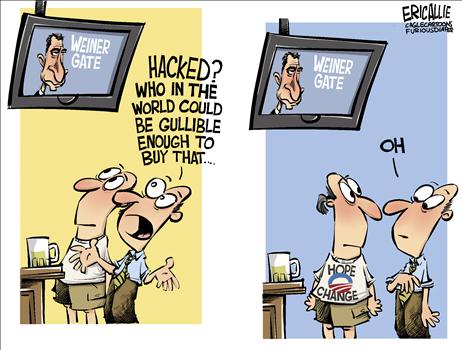 2 posted on 06/08/2011 7:09:08 AM PDT by Oldeconomybuyer (The problem with socialism is that you eventually run out of other people's money.)
[ Post Reply | Private Reply | To 1 | View Replies]
To: doug from upland
even discouraged some "schoolgirls" from forming a relationship with the congressman

Good for these conservatives! I bet they have a copy of the incriminating photo that Breitbart alluded to in his/Weiner’s press conference.

Is the picture in question, one where Weiner is proving how flexible he can be? That’s what I heard rumored?

I said from the beginning that THE question is whether he knew some of the people were underage. He could not know and he indicated that at the Breitbart/Weiner presser. This sinks him. With this new information he is toast. I still predict that he will be gone by Friday. He is a politically dead man walking.

Going to lose his job, pension, wife and just about everything else. He was a pompous, arrogant jerk and has gone from being disliked to being hated and the brunt of jokes. This is about the best example of karma I have seen in awhile.

I doubt that this bully can handle the slide to the bottom and beyond and would not be surprised if he does something very dramatic to himself. He cannot handle being nobody but that is who he is.

7 posted on 06/08/2011 7:29:42 AM PDT by isthisnickcool (Sharia? No thanks.)
[ Post Reply | Private Reply | To 5 | View Replies]
To: doug from upland
"Last month, Stack sent a 16-year-old California girl who wanted Weiner to escort her to her prom a message discouraging her from contact with the congressman."

This means at some point in the twitter conversations Weiner was aware that this girl was underage. I guess the question is if after he was aware of it was he sending her sexually lewd messages? If he stays in Congress, I guess we'll find out through the investigation...

Weiner is just an ugly ugly man inside more than outside and that takes some doing. I am constantly embarrassed that women seem to be attracted to men who either have money or power but absoluely no character. Few understand that money and power can vanish instantly but the character of a man will be there throughout his life.

What absolutely amazes me is that he would take chance with people that he didn’t even know and had no way of knowing that he could trust. I would not send such photos to somebody that I know and trust because people and relationships can change and also a third party could somehow come across pics.
No judgement and no self-control.

So why isn’t Weiner under investigation for lewd and lascivious behavior with minors? If he wasn’t a congressman this is the first thing they would focus on.

I think he will be gone by Friday too. He has lost everything. It’s his arrogance that bothers me. I think deep down he doesn’t believe he did anything wrong. The truth is going to hit him real hard.

He is still a female-lusting woman-bait of a stud!! Right girls?!! Not guilty?

When the girl suggested he take her to the prom, he dropped being a follower of hers the next day. This is one case is which I believe he didn’t know and stayed away from a minor when he found out. Even he is not that stupid. Well............

He has not lost everything.
So far he hasn’t lost anything.

Those benefits of being a Democrat Representative, he keeps.

The extravagant healthcare, retirement benefits etc, stay, and all paid for by us taxpayers.

Someone suggested a suicide watch for him, sure, again paid for by us taxpayers...

What does he lose? Some grand media attention.

I understand he will keep the benefits. He has lost the respect (if there ever was any) of his family, friends and the nation. He humiliated himself to the inth degree. I believe he has lost alot. As for suicide watch, I don’t wish for anyone to die no matter who they are so if some of my money goes to keep it from happening then so be it.

Ugh, like I’ve said before, I do not see the attraction to him anyway.

He is an ugly little weiner, isn’t he?

The face of the Democratic Party.

I actually don’t care if he stays or goes. If NY wants to be represented by a perverted weiner, that’s their choice.

It will be fun to see the little weiner used as campaign fodder. The jokes truly write themselves.