VINALHAVEN, Maine — Residents expressed grievances about turbine noise at a Thursday meeting that allowed islanders to ask questions of two wind professionals who will be collecting noise data in an attempt to identify specific mechanical perpetrators.

The experts then will come back to the community with options and prices for noise mitigation.

At Thursday’s meeting, held in Vinalhaven School's auditorium and hosted by Island Institute in Rockland, some residents among the more than 100 in attendance complained of unusual sounds generated by the turbines. Some said they felt vibrations and others were worried about health risks.

Cathy Frierson said she was sitting in her home working on her computer last week when noise from the turbines disrupted her.

“All of a sudden I felt a sternum vibration and felt ill,” she said. “I had to leave my home and go to the other side of the island.”

“The complaints I’m hearing and everyone else is hearing are very real. It’s a remarkable sound like nothing I’ve ever heard,” Hall said Thursday night after the two-hour meeting. “It affects everyone in the community. We were promised sound wouldn’t be a problem. It is a problem.”

TOPICS: News/Current Events
KEYWORDS: windpower Navigation: use the links below to view more comments.
first 1-20, 21-30 next last
The granole-types who live on the island voted 383-5 in favor of the turbines 2 years ago. This week over 100 showed up to complain.

Anyone who lives in a town contemplating these monstrosities, please share this article. A big supporter of wind energy in Maine Jonathan Carter and green activist opposed all types of energy projects including the construction on a new LNG terminal.

Now that the turbines are up and running, changing scenic views, and making noise, Carter has come out against-you guessed it-wind turbine projects.

As reported on FR some months ago-the greens strongly support solar power but when a large solar plant was to be built in the desert, the green activists OPPOSED THE CONSTRUCTION OF POWER LINES from the site to towns and cities where people live. 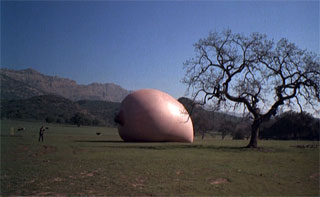 Does anyone see a pattern here? The enviro nuts and politicians want us living in caves. And by the way, we aren't allowed to have a fire in our caves to stay warm. It pollutes the air.

9 posted on 08/21/2010 11:55:28 AM PDT by dhs12345
[ Post Reply | Private Reply | To 1 | View Replies]
To: paul in cape
I don't believe I've heard Vinalhaven's mostly yankee inhabitants referred to a "granola eaters" before, and I doubt they are. Wind power makes sense on an island with high average winds and the earlier vote reflected that. The current unhappiness is with the noise, which apparently was not described honestly before the vote.

No whining there, just Mainers pissed off at being misled.

Incidentally, if you want granola eaters, try around Bath: the Hobbit infestation there is incredible.

I am no expert on wind turbines, but even I know they emit an awful lot of noise. Those who wanted the turbines should have done their own homework rather than take the word of experts [or whoever it was that mislead them].

I live about 5 miles from a series of 10 turbines. I pass them every day. They are on disused industrial land that will never employ people again, because of the ridiculous environmental liability laws in NY State. So, there might as well be windmills on the land making money for someone.

From a few hundred yards away, they are completely silent. If wind turbines are making noise, something is wrong.

12 posted on 08/21/2010 12:20:39 PM PDT by PGR88
[ Post Reply | Private Reply | To 1 | View Replies]
To: UCANSEE2
Now if they would just quit buying those CRAPPY FRUMP-FRUMP WINDMILLS, and go with a more advanced technology that Takes MUCH LESS ROOM , Is much easier to maintain, and has absolutely no problem with abrupt wind direction changes, then there is equipment like this already available

If what you say is true, why doesn't the market fix the problem? Don't markets work? If not then why if this technology is so great isn't it widely adopted? Please explain.

Spoke with some ranchers/farmers around Post, TX not long ago where there are a lot of wind "farms". Quite a few had moved off the land (those that were fairly close to the turbines), all sorts of problems cropping up. I saw first hand empty houses, nice ones, unable to sell them because of this developing problem of living near the turbines.

The rotors create inner ear problems in some folks due to sudden pressure changes and harmonics (yes, there is science on this) among other phenomena, some weird stuff happening health wise. I know there are FReepers that are up on this better than I am for sure.

Add insult to injury, quite a few turbines were rotating but not producing due to lack of maintenance. They didn't want to shut down the rotors because by leaving them turning gives the impression of producing power.

They want to build 1800 windmills in Maine covering virtually every mountain top in the state. It will ruin hiking and tourism as well as the health of anyone near them.

Betcha the lobstermen didn't care about building windmills. The artsy-fartsy bunch are the perps here, getting what they asked for, and getting it good and hard.

No, they don't. They want us dead.

They want the whole planet.....for themselves.

it’s the day trippers who are the granola types