“It’s ‘Elf ‘n’ Safety, mate, innit?” You only have to spend, oh, 20 minutes in almost any corner of the British Isles to have that distinctive local formulation proffered as the explanation for almost any feature of life. The signs at the White Cliffs of Dover warning you not to lean over the cliff? It’s Health & Safety, mate. Primary schools that forbid their children to make daisy chains because they might pick up germs from the flowers? Health & Safety, mate.The decorative garden gnomes Sandwell Borough Council ordered the homeowner to remove from outside her front door on the grounds that she could trip over them when fleeing the house in event of its catching fire? Health & Safety. The fire extinguishers removed from a block of flats by Dorset buildings risk assessors because they’re a fire risk? Health & Safety. Apparently the presence of a fire extinguisher could encourage you to attempt to extinguish the fire instead of fleeing for your life.

““You can’t just pick up the coffin and take it in!” he huffed. It was now the undertakers’ turn to confer. Inside the church, the organist was vamping the old Toccata & Fugue and wondering where everyone was. I had a vague feeling we were on the brink of the more raucous moments of the Ayatollah Khomeini’s funeral, with rival mobs tugging his corpse back and forth.”

Love that bit.
Just reminds me of my years in Britain.
Haven't heard too many “mate”s and “innit”s recently.

Do you miss Stan Shunpike? :)

Of all tyrannies, a tyranny sincerely exercised for the good of its victims may be the most oppressive. It would be better to live under robber barons than under omnipotent moral busybodies. The robber baron’s cruelty may sometimes sleep, his cupidity may at some point be satiated; but those who torment us for our own good will torment us without end for they do so with the approval of their own conscience. — C. S. Lewis

Nothing could be finer than to read a Steyn one-liner in the morning. (Better than being in Carolina, even)

9 posted on 02/09/2010 7:45:43 AM PST by MaggieCarta (We're all Detroiters, now.)
[ Post Reply | Private Reply | To 7 | View Replies]
To: JLS
Meanwhile, back at the headquarters of the Health & Safety Executive itself, it was reported in 2007 that staff are forbidden to move chairs lest they do themselves an injury. Instead, a porter has to be booked 48 hours in advance, which makes last-minute seating adjustments at staff meetings somewhat problematic. “Pull up a chair”? Don’t even think about it.

During a recent re-org, I got transferred into a different department. I'm still sitting with my old group, who I no longer work with. My new boss wanted to move me up to her area, but Elf n Services says no. It would cost too much at this time to have facilities make the move.

I have a laptop that I carry home every night. That's the extent of my "equipment" that facilities would have to move. The rest of my stuff could fit in a box, but I'm not allowed to move myself. It will be at least until April, before they'd even consider absorbing the costs to the department of having facilities move my location.

In the meantime, I enjoy being a lone outpost of my new department, free of the daily interraction with anybody who I actually have to answer to.

That one is on mine as well.

All the Brits with balls were killed off in the two world wars. Those left seem to be the product of the stay at homes and immigrants. The grand buildings are still in the U.K. but the inhabitants are just hollow husks compared to those who used to live there.

It seems much the same in Australia & N.Z.

This maddness is due to trial lawyers. Pure and simple.

you should enter your comment at the linked site for the benefit of other Steyn readers. 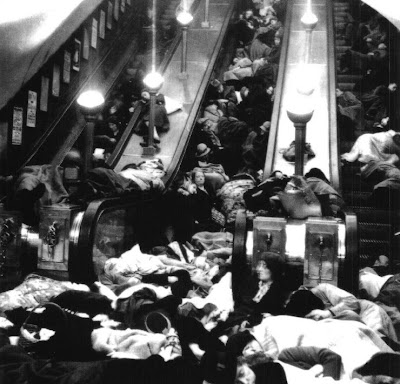 The Kinks song “There is no England Anymore” comes to mind.

This is both hilarious and terrifying. Are we going to follow the brits and become a nation of sheep, willing to suffer any idiocy just because some bureaucrat says we must?