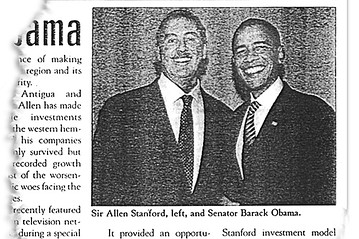 Texas businessman R. Allen Stanford, whose multibillion-dollar investment empire was ordered seized Monday by a federal judge, has long enjoyed big influence in Washington thanks to a steady supply of campaign contributions, Caribbean trips for lawmakers and fees to lobbying firms.

Mr. Stanford and his affiliated companies have spent more than $5 million on lobbying fees since 2000, federal records show. The businessman and his top executives have also contributed at least $2 million to candidates, including key lawmakers, and additional thousands of dollars on jets and resorts.

The businessman's primary goal for the last three to four years has been to minimize taxes to the Internal Revenue Service, according to interviews with lobbyists and lobby filings.

For the past few years, Mr. Stanford, who moved to St. Croix in the U.S. Virgin Islands, has been lobbying to preserve and expand tax rules that enable him to pay minimal federal income taxes as a resident there, according to lobbyists. While allies of Mr. Stanford in Congress have managed to fend off attacks on rules, his efforts to expand them further have thus far been unsuccessful, lobbyists said.

Among the recipients of Mr. Stanford's largesse is House Ways and Means Committee Chairman Charles Rangel (D., N.Y.), who has long advocated lenient tax policies toward Virgin Islands residents and in 2007 introduced a bill to enforce a statute of limitations on IRS scrutiny of islanders' old tax returns. That year, Mr. Rangel traveled to Antigua for a development conference partly sponsored by Mr. Stanford, who also donated $28,300 to Mr. Rangel in 2008. Sir Allen -- engaging in the age old practice of buying votes from both Rats and Pubbies.

And just which republicans did he “buy off” -

Obama just purchased the democrat votes with 780 billion in taxpayer dollars. Spending “only” a few millions to buy Rangel (D NY) sounds like a bargain.

How much did he donate to Obummer’s campaign? Or are we to believe that that picture with O. was taken just for the heck of it? Let’s get to the bottom of it.

Intelligent Texans did not do business with Texas based financial companies, banks, oil service companies, etc. They tend to by founded / run by scammers. Learned this the hard way in the 1980s when Texas was the epicenter of the great Savings and Loan frauds /scandals. Anyone remember “Whitewater”?

This led my in good stead to never have purchased any ENRON directly.

He had a simple rule, if you have power, you get money. He has no allegiance to any ideology other than greed. Democrat, Republican, who cares. Here’s an example of 2000-2001 when Bush was president and Daschle was Senate majority leader...they had power, so they got money, party affiliation not applicable:

“Stanford gave an additional $100,000 to the Bush Inaugural Committee.”