Last week I told you about Valerie Jarrett, the corrupt Chicago poltician serving as co-chair of Obama's transition team. This is in addition to Clinton co-conspirator John Podesta (the other co-chair) and Clinton attack dog Rahm Emmanuel as Obama's Chief of Staff. Hillary is expected to take over State. We can also add two other Clinton insiders: Clinton impeachment lawyer Greg Craig who defended the worst of the Clinton scandals and who was also involved in the violent government raid that delivered Elian Gonzalez to Castro's Cuba. In fact, we believe Craig was working with the communist Cuban government. And Eric Holder, Obama's choice for Attorney General who was also not only involved in the Gonzalez debacle but, far worse, in the infamous last-minute Clinton pardons. Holder was acting Attorney General and was in charge of approving that list which included not only convicted felons who paid large sums of cash to the Clintons.

TOPICS: Culture/Society
KEYWORDS: clintbama; clintonretreads; domesticterrorism; faln; obama; obamaregime; weatherunderground
The list also included pardons for two Weather Underground terrorists and Marc Rich, whose wife made substantial contributions to the Clintons. Holder not only personally helped Rich get the pardon, but he upended the rule of law by undermining Justice Department procedures put in place to prevent abuse of the pardon process. His record is dismal and includes support for commutations for members of FALN, a Puerto Rican terrorist organization, and he derailed investigations of the Clinton fundraising scandals while at Justice. Pardons for terrorists and crooks may not bother Obama, given his close relationships with Bill Ayers, Tony Rezko, etc. Most recently, even the NY Times has criticized his selection of Tom Daschle for health and human services (HHS) due to the fact that he's a highly paid advisor to health care clients at the law and lobbying firm Alston & Bird. And, his wife is also a professional lobbyist. This is bringing "CHANGE" to Washington? It's instead like the Clinton Administration, Act III. [What will Monica Lewinsky's job be? We better not ask!]
1 posted on 11/21/2008 6:37:55 PM PST by T.L.Sink
[ Post Reply | Private Reply | View Replies]
To: T.L.Sink
This is bringing "CHANGE" to Washington? It's instead like the Clinton Administration, Act III.

Only this time Ms Clintoon will run it out of the state department instead of the white/black house bedroom.

2 posted on 11/21/2008 6:42:16 PM PST by org.whodat (Conservatives don't vote for Bailouts! Republicans do!)
[ Post Reply | Private Reply | To 1 | View Replies]
To: org.whodat
Bringing all these folks into the government is going to prove to be very dangerous to Obama.

Half of them are either murderers or accomplices to murder. Imagine what a feather in their cap they'd view a successful Presidential assassination attempt.

Obama has to be about the stupidest individual to ever hold the office (if he even lasts that long). 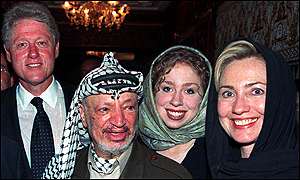 after 8 years of hateful msm attacks on bush,

now we have no bush.

Do ya think they will try to shut us down again?

I thought it was the second Carter Administration.

start hoping/praying that obamacrimes.com will be successful.

I think they’re counting each term as an administration.