“OPERATION ALOHA OBAMA” YIELDS UP THE TRUTH ABOUT BARACK OBAMA

OBAMA’S ‘DREAMS FROM [HIS] FATHER] WAS REALLY A BOOK ABOUT HIS REAL FATHER, FRANK MARSHALL DAVIS

OBAMA WAS THE VICTIM OF A HISTORICAL ANOMALY, AND ROBBED OF HIS BIRTHRIGHT AS THE SCION OF CIVIL RIGHTS ROYALTY

OBAMA’S ORIGINAL “VAULT” BIRTH CERTIFICATE IS EITHER INCOMPLETE OR TAMPERED WITH, WHICH IS WHY IT HAS NEVER SURFACED.

MARTIN SAYS OBAMA SHOULD SUBMIT TO DNA TESTING WITH HIS BROTHERS

WAS OBAMA THE “VICTIM” OF A PRO-LIFE MOTHER?

“Mendacious adults ‘switched’ Obama at birth. That is why he has refused to allow access to the original or ‘vault’ birth certificate,” Martin told a Honolulu news conference. “We believe the original certificate did not list a father. Barack Obama became the father as a result of an agreement between Ann Dunham, Frank Marshall Davis and Barack Obama, Sr.

“Davis was already married to a White Woman. He did not need a nonmarital child by a second one. Ann probably refused to have what was then called a ‘back alley’ abortion. Davis may have felt that ‘Obama’ would face less stigma with an ‘African’ background than a Negro one. The civil rights revolution, of course, turned that gambit upside down. In discovering and understanding what happened we cannot forget we are dealing with events in 1961, not 2008.

“The irony in all of this is that Obama once stated he did not want his daughters to be ‘victimized’ with a child. And he is alive because his mother took the contrary view.

“Barack Obama has known this since adulthood, and the shock of this discovery still reverberates in his psyche.

“Ironically, what I have to say today dilutes the ‘Muslim’ theory that has propagated. Davis was not a Muslim. If Obama had told the truth at some point in his life, instead of living endlessly with the lies that were imposed on him by the adults in his life, we would have avoided a great deal of confusion. I, for one, have deep compassion for Mr. Obama. He is not the first person in history to be caught up in this kind of family fraud.

“The disclosure by the two women in his life that he was not the ‘son’ of his ‘father’ also explains why he manifests such extreme ambivalence to both his mother and grandmother. He is angry because he was cheated of his real father.

“Obama was robbed of his birthright of being the son of civil rights royalty, and of a father with whom he was completely simpatico. He could have grown up the son of Frank Marshall Davis, civil rights pioneer and activist, cutting-edge journalist, poet and man of letters. Mr. Davis was an extraordinary man in a dark period of this nation’s history, the pre-dawn of the civil rights era.

“Obama has probably suspended his campaign and is flying to Honolulu because he is deathly afraid his grandmother may make a ‘dying declaration’ and blow the whistle on his family fraud. Dying people often blurt out the truth. The true facts of Obama’s parentage also reflect why there has been so much tension and alienation, as well as genuine love, in Obama’s relationship with his grandmother.

“There has been a great deal of confusion and misconception about Frank Marshall Davis. A brief history lesson is essential to understanding the bizarre facts of Obama’s provenance.

“During the 1920’s and 30’s many Negros (African-Americans) became ‘communists’ because the Soviet Union and the Communist Party USA promised to end racial segregation and Jim Crow laws in the United States. The Democratic Party, of course, was the powerful force behind segregation and Jim Crow. So it is a twist of fate that the same party that oppressed Blacks has now nominated one for president.

“Madelyn Dunham is the last surviving person who knows the truth about the switch. That is why as we closed in on Dunham, Obama went ballistic, cancelled his campaign and came to Hawai’i to head us off.

“I actually carry an official, certified pocket-sized birth certificate on me at all times [Andy shows a copy to media]. But this is NOT my ‘birth certificate.’ The original certificate is held in the City Clerk's vault in Middletown, Connecticut. That is what has come to be known as the 'vault copy.'

“I am asking Judge Ayabe to impound the value certificate and have the court hold it for safekeeping.

“By the time Barack Obama learned who he was, it was too late to change his identity. He was who he was, so he continued the ruse of being the son of an ‘African herder,’ which was yet another lie. ‘Dreams From My Father’ bears no connection to dreams from Barack Obama; there were none. It was Frank Marshall Davis who communicated his dreams to his secret son.

“There is a simple way for Obama to resolve this controversy: he can either admit the truth of these facts and order the immediate release of his vault certificate; or he can submit to a DNA test. We can conduct a Maury Povich-style DNA test to determine filiation between Obama and his brothers, one of whom blogs at BarackObama.com.

“In closing, I can only say that we used the fictional ‘Hawai’i Five-O’ as our dramatic template for this investigative operation. We could have as easily used the great, real-life Hawai’i detective Chang Apana as our polestar. He was featured in yesterday’s newspaper.

“As for Mr. Obama, all I can say is ‘Book’em Danno.” Case solved. Barack Obama the presidential candidate is the son of Frank Marshall Davis.” Martin stated.

“I bear Mr. Obama no ill will and no animus. I have only been a faithful servant of the search for truth, and I believe we finally know the secret truths about who Barack Obama really is: the son of Frank Marshall Davis.”

TOPICS: Announcements; Extended News; Free Republic; Politics/Elections; US: Hawaii
KEYWORDS: barack; certifigate Navigation: use the links below to view more comments.
first previous 1-20, 21-37 last
To: tuckrdout
Well then, I guess he is American and we can drop all this nonsense about his birth certificate.

No. I think the court cases should go forward. This could be a story fed to a story hunter to protect Oboma from actually having to prove his citizenship.

Oboma also has, according to a WND reporter who actually went to Kenya, a Kenyan birth certificate. Remember, Oboma has a birth name as well as an adoptive name.

I think the courts should find out who the real Oboma is, and if he can legally run for the presidency. If so, then oh well. If not, it's time to put a stop to all his nonsense.

What if none of us are who we say we are?

No, but if his father is also an American, then he is American...see. A natural born American not matter where you are born, if both parents are Americans. That is the law...McCain wasn’t born in the USA either. The courts have ruled on this.

There is some question, if his father was a Kenyan, because the mother has not been living in the USA for 4 years after her 16th birthday...but, if Marshal were the father, it is all moot. Sorry.

Well that would depend upon what the meaning of the word “us” “is”.

Two globalists made a bet whether a Socialist fathered by a Communist could take the United States of America?

Well that would depend upon what the meaning of the word “us” “is”.

Frank Marshall Davis and his first wife, Thelma Boyd, seduced a 13 year old girl named Ann in the 1930’s in Georgia. Davis worked at a newspaper in GA between 1931 and 1934 then returned to Chicago. He and his wife tried to make the marriage work but were unable to and she relocated to Washington. (I have no idea if it was D.C. or state) All this info was found in a 24 hour period of searching, and it was eventually found in a pdf of a biography of Davis.

Never fear though, Obama will have his photo ops while playing the dutiful grandson.

“The central political problem the trip presents is that it takes Obama off-message, his advisers said, diverting attention from the campaign’s focus on the economy. Although Obama will take the traveling press corps with him on the 36-hour trip — ensuring coverage of him as a dutiful grandson — he will miss events in the swing states of Iowa and Wisconsin. McCain is scheduled to appear on “Meet the Press” from Iowa over the weekend, just after Obama returns to the Mainland.

The Obama campaign is dispatching running mate Sen. Joe Biden and his wife, Michelle, to what they hope will be well-covered appearances.”
To be found here:
http://www.honoluluadvertiser.com/article/20081022/BREAKING01/81022089

Martin may have info, but he presents like a bad car salesman....too much grandiose, egomaniacal speek. Jury out.

But he does look quite a bit more like Osama Bin Laden.

"Well then, I guess he is American and we can drop all this nonsense about his birth certificate."


Not necessarily.  There is still the issue that he was legally adopted by his step-father and taken to Indonesia where he would have become an Indonesian citizen.  (Indonesia does not recognize dual citizenship.)  The problem for Obama...er..."Soetoro" that remains is how he was able to travel to Pakistan and other "no travel nations" for American citizens in 1981.  The answer seems obvious: he was traveling on an Indonesian passport issued because he was - and reamins - an Indonesian citizen.

For what it's worth, Andy Martin's presser presented no substantial evidence proving this latest conjecture.  He has no more access to a "vault" birth certificate than anyone else does, which would conclusively prove to whom and where Obama was born.

Finally, as someone else pointed out, the identity of Obama's real (biological) father has nothing to do with where he may have been born.  If reports Berg has obtained are true, Barack Sr. and Ann Dunham were married and traveled to Kenya, but due to the late-term nature of her pregnancy was not allowed to fly back to Hawaii.  If she gave birth in Kenya, he is not a "natural born citizen" and is not elligible to hold the highest office in the land.

Because McCain voters do not want their cars trashed by lunatic messiah worshippers. 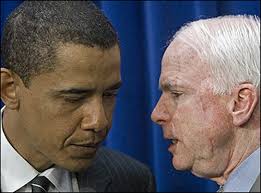