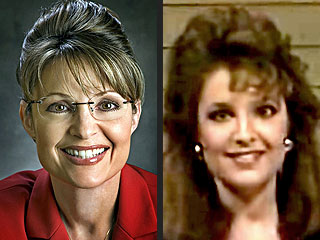 As a new mom, how are you going to juggle all this? SARAH: I am thankful to be married to a man who loves being a dad as much as I love being a mom so he is my strength. And practically speaking, we have a great network of help with lots of grandparents and aunties and uncles all around us. We have a lot of help.

So will your husband be on leave now indefinitely to be Mr. Mom?

SARAH: I would say so, yes.

Gov. Palin, when you were 13 weeks pregnant, last December, you had an amniocentesis that determined Trig had Down syndrome.

SARAH: I was grateful to have all those months to prepare. I can't imagine the moms that are surprised at the end. I think they have it a lot harder.

Mr. Palin, you have this tiny baby with special needs. Do you worry that people may wonder if she'll be giving short shrift to her family?

TODD: She's heard that her whole life – the challenges of being a female and mother in the work force. I remember the first time she ran for mayor one of her fellow council members told her you can't run because you've got three negatives: Track, Bristol and Willow. Those are the three kids we had at the time. So when you tell her that kind of stuff, she just gets fired up. We're an Alaska family that adapts.

TOPICS: Front Page News; News/Current Events; Politics/Elections
KEYWORDS: 2008veep; mccain; palin; peoplemag Navigation: use the links below to view more comments.
first 1-20, 21-33 next last
Had to chop it up. This is their first interview after the announcement.
1 posted on 08/29/2008 6:05:56 PM PDT by kristinn
[ Post Reply | Private Reply | View Replies]
To: kristinn

2 posted on 08/29/2008 6:10:42 PM PDT by Tax-chick (What would Sarah Palin do?)
[ Post Reply | Private Reply | To 1 | View Replies]
To: kristinn
In April of this year, Sarah Palin give birth to her fifth child, Trig, who was born premature with Down Syndrome. Recent statistics show that in the U.S., approximately 90% of Down Syndrome diagnoses end with the mother choosing abortion. Palin on her family’s reaction to the diagnosis, in her own words:

“We knew through early testing he would face special challenges, and we feel privileged that God would entrust us with this gift and allow us unspeakable joy as he entered our lives. We have faith that every baby is created for good purpose and has potential to make this world a better place. We are truly blessed.” (April 18, 2008, Anchorage Daily News)

Sorry, I know I've been posting this on multiple threads, but this is the only chance. Strike while the iron is hot!)

Too bad that Governor Palin is not at the top of the ticket...

All things in their proper season...

I love it when a family looks at children as human beings, not as a political impediment or disadvantage.

Democrats ought to be ashamed of themselves.

Libs just never consider, think or contemplate that the Dad could be in the picture.

There are not too many liberal families where the dad IS in the picture. Many are single parent households.

Where do your children’s names come from?

TODD: Sarah’s parents were coaches and the whole family was involved in track and I was an athlete in high school, so with our first-born, I was, like, ‘Track!’ Bristol is named after Bristol Bay. That’s where I grew up, that’s where we commercial fish. Willow is a community there in Alaska. And then Piper, you know, there’s just not too many Pipers out there and it’s a cool name. And Trig is a Norse name for “strength.”

Thank you for posting. That’s a great article.

What’s on the dinner table most often in the Palin house?
TODD: Our favorite is moose hot dogs, caribou hot dogs. We get caribou, get ‘em ground up and put them into hot dogs. They’re Polish.

That is awesome....need to find a place which sells those!

She is AWESOME!!! And her husband is as well-spoken as she is!

This is a genuinely pro-life ticket. And I don’t mean that strictly in the sense of being anti-abortion, but these folks know what loving life and, at the same time, being willing to sacrifice really means. McCain showed that he was willing to lay down his freedom and possibly his life for his fellow soldiers by refusing to be released from the Hanoi Hilton before his fellow POWs. Governor Palin showed that she is willing to sacrifice for the rest of her life for the sake of her baby with Down syndrome.

Each one made a free choice to truly sacrifice for what is right.

Freepers, this is the pro-life movement’s greatest hour. We cannot, cannot lose this election to Senator Infanticide. Please go right now to http://www.johnmccain.com/ and give until hurts.

I loved that. I have a friend in Alaska, in the Kenai Peninsula, and what they get to eat is to die for. Of course, their winters are to kill yourself, for a Southern chick.

Great. Cindy McCain is well-spoken, too. They are very attractive families.

And doesn’t Cindy have a background in working with special needs children?

>Do you worry that people may wonder if she’ll be giving short shrift to her family?<

only hours after the announcement and the msm is focused on the negative.

Once Sarah’s life story and her personality get out to the masses in through the MSM in places like People Magazine...the more they will love her.

I’ve been advocating for her as the VP choice ever since I first read about her on FR and Rush’s show.

18 posted on 08/29/2008 6:42:38 PM PDT by Eric Blair 2084 (Alcohol, Tobacco and Firearms shouldn't be a federal agency...it should be a convenience store.)
[ Post Reply | Private Reply | To 1 | View Replies]
To: 50cal Smokepole
Recent statistics show that in the U.S., approximately 90% of Down Syndrome diagnoses end with the mother choosing abortion.

My wife and I were given the same news back in 1990. The doctors told us we should abort the baby. We refused. Lucky for us, our little girl was born without Downs. She is now a senoir in high school with a 4.3 grade average.

It’s strange that the liberal feminists are convinced a woman can handle the challenges of the Presidency, but can’t be expected to handle a challenging pregnancy.

Sarah Palin has shown she can handle it ALL— with the irreplaceable help of a good husband, a loving family, a constituency of concerned citizens, and the grace of God.