An estimated 75,000 gathered on the banks of the Willamette River in Portland on Sunday to see Barack Obama. “Wow! Wow! Wow!” were his first words, as he surveyed the multitude, which included people in kayaks and small pleasure craft on the river.[/quote]

Two pictures were included to show Obama in a sea of people: 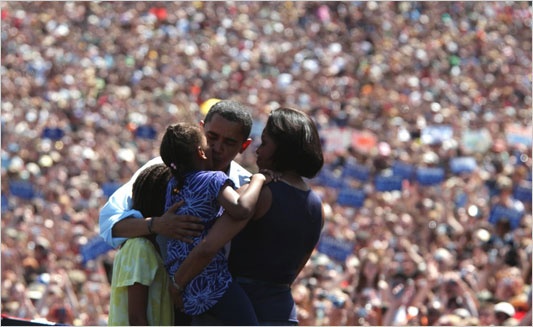 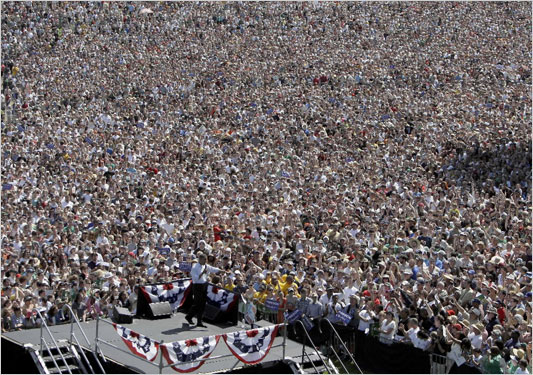 TOPICS: Politics/Elections
KEYWORDS: clinton; fake; fauxtography; hillary; obama; picture; pictures; primaries Navigation: use the links below to view more comments.
first 1-20, 21-40, 41-60, 61-80 ... 141-146 next last
Let's take a look at some other pictures of that rally to put things in perspective:

Compared to the pix above, we see the top bit uncropped, showing the crowd does not stretch out to inifinity.

Same from the Salem News: 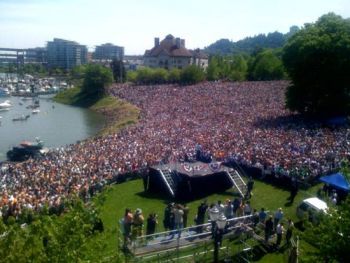 And look where the photo line has been set up. See the bleachers in the foreground? They are positioned so the ONLY perspective the photographers can get is the candidate in front of people, and if the pictures are cropped creatively, a seemingly infinite sea of people.

Yahoo is running this as their lead news photo.

The ones of Hillary are showing her talking to small crowds of 'stereotypical' country folk.

Is this fair journalism or 'selectively edited' photojournalism to imply that Obama has infinite crowds wherever he goes?

Oh yes, one more to put the 'unprecedented' notion to rest, here is the Haughty John Kerry in Portland in 2004:

A savvy photo editor can even make John Kerry look like a messiah... ;)

Get this out to keep Hillary supporters from being disillusioned. She needs our help to perservere until Denver! :D

Look at that, Jon Carry the Messiah!!

On top of that,all those people are over 400 lbs making the crowd look bigger

"Don't be scared sweetie. If the mean white people try to rush the stage the nice Secret Service men will shoot them."

What, no pictures of him throwing water bottles out to the fainting masses?

The media has finally picked its candidate.

How many bitter people had a bible or a gun in that crowd?

Mrs Hussein Obama must have had to move around a lot of white people!

Look at that sea of racist white voters!

17 posted on 05/18/2008 8:44:17 PM PDT by BOBTHENAILER (One by one, in small groups or in whole armies, we don't care how we do it, but we're gonna getcha)
[ Post Reply | Private Reply | To 1 | View Replies]
To: goodnesswins
If someone has some photoshop / MS-Paint skills (I have none) and can add in the cropping rectangle in this picture, I would sure appreciate it. Just compare it with the 2nd pic in the original post and put a nice red rectangle (excuse me! a BLUE rectangle) around what was edited to make the final picture. Much obliged.

Did the article mention the free Dave Matthews concert and free beer for all before Obama showed up?

Is this the same park that the ‘park scene’ in Kindergarden Cop was filmed at?