Hillary and Obama in Small Town (Remember the culture wars? This week the Democrats sued for peace.)
The Virginian/Wall Street Journal ^ | 4/18/2008 | Moneyrunner

Remember the culture wars? This week the Democrats sued for peace.

On Friday evening, email queues lit up everywhere with people reacting to Barack Obama's thoughts on life being nasty, bitter and short in small-town America. Time was not long ago that a Democratic candidate could have said such folk cling to guns and religion and are hostile to "diversity" with nary a peep from his party. Not now. Obama was repudiated. Crushed. Media analysis suggested the damage could last til November.

Before midnight, Hillary was paddling down Whiskey River with the boys at Bronko's. Then on Sunday evening, the white flag really went up over the culture war's battlefield.

Sen. Obama: "Religion is a bulwark . . . Somebody like myself whose entire trajectory, not just during this campaign, but long before, has been to talk about how Democrats need to get in church, reach out to evangelicals, link faith with the work that we do . . .

His advice to the Left: "Give religious reasons for your acts."

“His advice to the Left: “Give religious reasons for your acts.””

The Lord spake unto me and said, “Verily, thou shalt raise taxes”

“His advice to the Left: “Give religious reasons for your acts.””

The Lord spake unto me and said, “Verily, thou shalt raise taxes”

AND make sure women can murder their infants right up to birth,

AND repeal the Defense of Marriage Act so that gays, polyamists, and small-animal/child lovers can all “marry” the object of their affection.

" Crackerquiddick ~ Bitter Gate " and “Wright is wrong Gate” are huge problems for the elitist would be Sneerer in Chief, Hussein Obamasnob!! 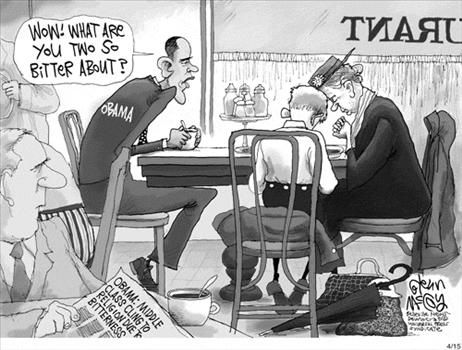 For an inside look at the real Hussein Obama and his elite hate America backers at San Francisco where Hussein Obama made his elitist remarks,

Go here to see the thread with all The Pictures posted and Here to see another thread about this meeting of elite left wing America haters.

There are some very interesting pictures and comments re the actual meeting on those threads.

Behold the would be Sneerer in Chief!