Prague- Czech President Vaclav Klaus is concerned about the development in Kosovo, which declared its independence of Serbia on Sunday, Klaus writes on his website today in reaction to a letter by Communist (KSCM) leader Vojtech Filip.

Klaus writes he understands the frustration and disillusionment of Serbs and that is he concerned about the impacts that Kosovo's declaration of independence can have on other countries both in Europe and in the world.

The position of the Czech Republic must not sharpen the already tense situation in the area, Klaus writes.

"Our reaction must be formulated and timed in such a way to contribute to calming down and not escalating the imminent conflict. I am convinced...that the government of the Czech Republic is aware of these circumstances and that it will take them into consideration during its decision-making," Klaus writes.

The Czech Republic must also take into account the traditional friendly relations between the Czech and Serbian nations, Klaus writes.

The Serbian nation "has always sided with us in time of difficult historic trials,"Klaus writes.

He recalls that even the EU is split in position on Kosovo's independence.

Independent Kosovo has been recognised by, for instance, Britain, France, Germany and the United States, while Russia, China and Slovakia oppose it.

Filip said in his letter to Klaus that the Serbian nation is suffering "a scandalous wrong" and that the Czech Republic should support Belgrade.

Filip compared the separation of Kosovo to the Munich Treaty of September 1938, when the leaders of Germany, Italy, Britain and France decided that Czechoslovakia would cede its border areas with dense German population (Sudetenland) to the German Reich.

Czech diplomacy has not yet recognised Kosovo's independence. Prague is interested in good relations with Serbia, Foreign Minister Karel Schwarzenberg said on Thursday.

He said Czech diplomacy will not hurry up to recognise the independence of Kosovo.

He added that he would submit the relevant documents to the government when the "time is ripe."

Filip also recalled in his letter to Klaus that the Chamber of Deputies had recommended to the government at the beginning of February that it procede in line with the international law and resolutions of the U.N. Security Council during talks about the future status of Kosovo.

The recommendation, passed in the lower house by the opposition Social Democrats (CSSD) and Communists (KSCM) against the will of the government coalition MPs, is not binding on the cabinet.

Aren't they the same countries who signed the Munich Pact to give Czechoslovakia to the Nazi's in 1938?

Well, now they're back carving up Serbia for the Nazi imitating Islamofascists in Albania.

Maybe they think appeasement will work if we just keep trying it.

I don’t blame the Czech President for his concerns. It’s very understandable.

Turkey favors recognition. This is not receiving the attention it should.

The commies are useful from time to time, in France they helped anti-EU camp to win constitutional referendum.

Agreed, the Turks should also pay the price. They must be very sure of the support of the great powers.

They know their limits and their support. The EU is their present concern, Russia is not. 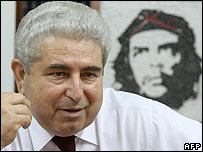