KIAMESHA LAKE, N.Y. — There was a time when comedians would flock to the Concord Hotel, bringing the house down every weekend with ethnic humor, one-liners and a smattering of risqué jokes. Now, firefighters come to this shuttered monstrosity once a year to burn the house down, section by section.

From around the state, firefighters arrive at the Concord not for matzo ball soup, but to tramp through its corridors — setting fires and then putting them out — during a training weekend arranged by the New York State Association of Fire Chiefs.

Arthur Winarick, a Russian immigrant who acquired the hotel in the late 1930s, had the foresight to use concrete and steel rather than wood when he expanded it.

“Everything burns but the structure,” said Glen Miller, a training instructor and fire coordinator for the Yates County Fire Service. “There’s no worry that everything will crash in.”

Just last weekend, 130 firefighters showed up to train and hone the essentials, including search and rescue, forcible entry and hose and roof operations. They broke windows, cut through roofs and used thermal imaging cameras to maneuver through heavy smoke.

At this rate, according to Christian Delisio, a hands-on training coordinator, “it’ll take us 10 years to burn the place down, if it’s there that long,” because the Monticello Fire Department burns some rooms on its own and “some rooms just can’t burn.” 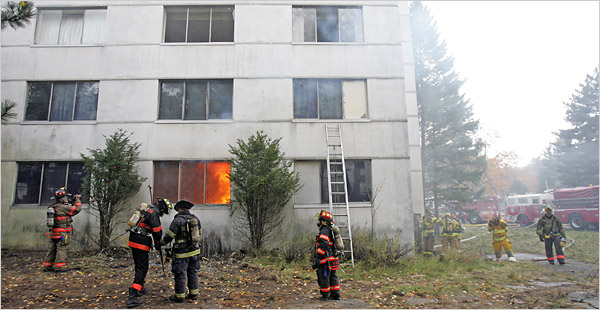 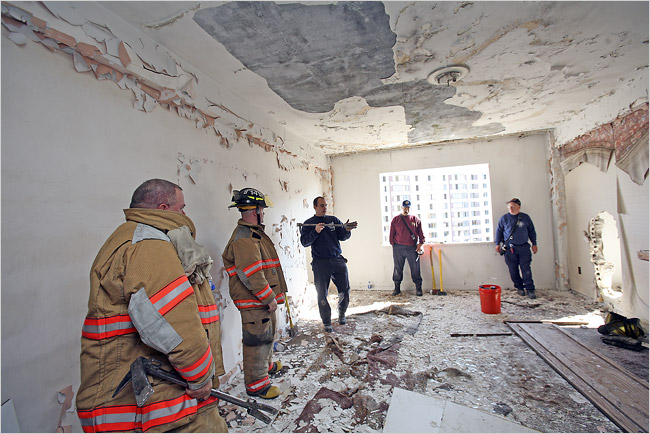 Suzanne DeChillo/The New York Times
Once a hotel room, now a classroom for a lesson on tool use.

The New York Times
1 posted on 10/27/2007 10:00:53 PM PDT by neverdem
[ Post Reply | Private Reply | View Replies]
To: neverdem
Very sad. I visited the Catskills frequntly in the late 1950's and 1960's and the Concord was the number one resort. The older Grossinger's was more traditional. The movie Dirty Dancing was based on the local youth culture during that period.
2 posted on 10/27/2007 10:09:09 PM PDT by Lucius Cornelius Sulla (No Covenant with Death: Giuliani Shall Not Pass!)
[ Post Reply | Private Reply | To 1 | View Replies]
To: cyborg; Clemenza; Cacique; NYCVirago; The Mayor; Darksheare; hellinahandcart; Chode; ...
Spitzer forges compromise on driver's licenses for illegal immigrants [updated]

FReepmail me if you want on or off my New York ping list.

The Chiefs Association used to have their confrence there, there would be numerous rooms with equipment, trucks, and just about everything else related to fire fighting and ems.

Now they do it in Rochester.

While we still have a few members that will go there, we now go to a show in Harrisburg PA that is much bigger than the Chiefs show ever was up at the Concord.

Yes that place will be missed!

Training Ground for Firefighters, possible future for much more of the decaying development and infastructure of the rural northeast, hayna?

I was in the NY All State stage band, at the Concord, in about 1971. The hotel amazed me. I had never had food like that.

The downstate kids were terrors. They plastered the inside of one of the elevators with Sam Goody stickers. An eye-opener for innocent little me.

With all due respect, your post had NOTHING to do with the theme of this article. We don’t have to be thinking illegal immigration every hour on the hour; some of us have other interests as well.

I went there for a convention as a high schooler, and what I remember most was the huge dining room. It would be cool to go back there for fire training. For safety reasons, there are a lot of restrictions on live fire training now, so it isn’t easy to get realistic conditions.

Well you can take your respect and stick it where the sun does not shine. The point was to share both ideas on my NY list. Sometimes the ideas are more varied, but the theme still is New York.

I was there a few times as a kid.