In a heavily hyped debate – one that environmentalist Democrats hoped would be a “smack down” on Republicans -- former Speaker of the House Newt Gingrich disappointed them and conservatives alike when he declared that human activity was causing the Earth to warm.

The concession was made in a debate on global warming with Sen. John Kerry (D.-Mass.) today on Capitol Hill that was sponsored by the Brookings Institution and the RAND Corporation.

In his first portion of allotted time Gingrich said there were two undisputed areas of scientific consensus on global warming: that the earth is getting hotter and the warming had been caused by human activity.

At one point, Kerry asked Gingrich what he would say to conservatives like Sen. James Inhofe (R.-Okla.) who do not believe global warming is caused by human activity. Gingrich said, "The evidence is sufficient that we should move to the most effective possible steps to reduce carbon."

“We should be moving to develop all kinds of new green technology,” Gingrich said. He challenged Kerry to find market-based solutions to reduce carbon emission instead of increasing environmental regulations.

“Regulation and litigation are the least effective ways of getting solutions,” the former Speaker said. “Reshaping markets with incentives are the fastest way.”

Kerry argued that environment laws drafted with help from the United Nations have been successful.

Kerry said the laws were “needed to create the leverage and the market so they would go out and invest in the technology because they don’t invest without it.” Government regulation, he said “is the only way to invite people to make that investment.”

“We are not arguing bureaucracy and regulation. We are arguing whether putting a price on carbon is bureaucracy.”

Before launching into his initial speech, Gingrich endorsed the book Kerry had co-authored with his wife Teresa Heinz Kerry "This Moment on Earth.".

“This is excellent, this is a very good book,” he said. “I would commend this book to anyone who wants to see local leadership make a difference.” Gingrich said he didn’t agree with “about 60% of it” but would urge others to “read it because it’s an example of individual local leadership against the odds.”

Gingrich’s concession was expected in many news circles as part of his long-shot strategy to run for President in 2008. He has said since last year that he would make a decision to run or not sometime in the fall of this year. He is planning to release a new book, "Contract with the Earth" this November that he co-wrote with conservationist Terry Maples.

Yesterday, in his weekly email newsletter “Winning the Future” Gingrich said that September 27 would be “Solutions Day.” This is to honor the 13th anniversary of his 1994 “Contract with America.”

Last week, Gingrich called the Spanish language a “ghetto language.” Immediately after the mishap, he recorded an extensive apology, in Spanish, directed to the Hispanic community that made available on YouTube. Last month, he revealed to Focus on the Family’s James Dobson that he had an extramarital affair on Dobson’s radio show.

In January, Gingrich appeared at a hearing conducted by the Senate Foreign Relations Committee to talk about how to stabilize Iraq.

It figures that Newt would wuss out like that.

More and more they are proving the Republican party has ceased to exist.

4 posted on 04/10/2007 1:23:35 PM PDT by Quick or Dead (Both oligarch and tyrant mistrust the people, and therefore deprive them of their arms - Aristotle)
[ Post Reply | Private Reply | To 1 | View Replies]
To: Chi-townChief
I'm glad I'm not the only one around here that expects that of him.

He's a joke all around.

Newt is spending much to much time with Dick Morris.

Gingrich has always been a disappointment; he’s never been able to quite live up to the hype.

And 30 years from now when the cycle changes and the leftists are screaming about the coming ice age, no one will listen to people who remembered when everyone was freaking about global warming.

I’ve been expecting something like this from him myself. I haven’t trusted him ever since I heard him give the classic “personally opposed but” weasel line on abortion years ago on TV.

Many predicted his slide on the pre-debate thread.

Sen. John Kerry (D-MA) and Fmr. Speaker of the House Newt Gingrich debate the government's role in confronting global climate change. The event is hosted by New York Univ.'s John Brademas Center for the Study of Congress. The Center's "Legislating for the Future" project examines how Congress mkaes policy decisions on long-term issues like global climate change. 4/10/2007: WASHINGTON, DC: 2 hr. 10 min.
12 posted on 04/10/2007 1:27:12 PM PDT by P-40 (Al Qaeda was working in Iraq. They were just undocumented.)
[ Post Reply | Private Reply | To 1 | View Replies]
To: Peach
And 30 years from now when the cycle changes and the leftists are screaming about the coming ice age, no one will listen to people who remembered when everyone was freaking about global warming.

Exactly. After all, some people still take Paul Ehrlich seriously.

I read an interview with him yesterday where he wussed out on the 2nd Amendment too. Oh well, we still have 1 1/2 yrs to keep the faith.

Newt is trying to replace John McCain as the Democrats’ favorite Republican. This shows how much Newt has “grown”.

No surprise here as Newt continues to go left. 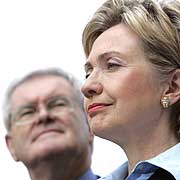 19 posted on 04/10/2007 1:28:31 PM PDT by gov_bean_ counter ( Who is the Democrat's George Galloway?)
[ Post Reply | Private Reply | To 8 | View Replies]
To: xjcsa; Gelato; AFA-Michigan
He is planning to release a new book, "Contract with the Earth" this November that he co-wrote with conservationist Terry Maples.

I've thought for a long time that Gingrich had completely lost it, but this seals the deal for all time.

But, when I read the above, I still had to check and make sure that his was Human Events and not Scrappleface.