The cardboard queen who's bigger than Oprah (worth $4.7 billion from recycling paper trash)
The Sidney Morning Herald ^ | November 11, 2006 | Mary-Anne Toy

NEXT time you unpack a new television, DVD player or other made-in-China electronic item or toy, chances are the cardboard packaging being thrown away has helped make Zhang Yin, 49, China's richest woman. And when you do throw away the packaging, there's a chance Zhang's company, the auspiciously named Nine Dragons, will be buying the cardboard to recycle it.

It's a virtuous circle that last month saw Zhang named as China's richest person by the Hurun Report, knocking off two-time winner Huang Guangyu, the 37-year-old Harvey Norman of China who owns the Gome electronics retail chain. The rival Forbes rich list has Zhang at No. 5 on the basis that her 72 per cent control of Nine Dragons shares is shared with her husband Ming Chung Liu and brother Zhang Cheng Fei.

But both lists agree that Zhang, who founded Nine Dragons, China's largest maker of container board, is the world's richest self-made woman, eclipsing the US talkshow host Oprah Winfrey and Harry Potter author J.K. Rowling.

Despite Mao Zedong's dictum that women "hold up half the sky", communist China has remained by and large a boys' club and, until recently, an old men's club at that. The eldest of eight children born in southern China to a retired army officer who fought for the communists during China's civil war, Zhang is the exception to the rule, turning $US4000 ($5000) of savings into a $3.4 billion fortune by exporting used American newspapers and magazines to China and recycling them to make the cardboard boxes needed to export China's torrent of manufactured goods to the world.

She arrived in Hong Kong in the mid-1980s with 30,000 yuan ($5000) to work for a trading company that had headhunted her for her industrial accounting experience. After a year she'd accumulated $HK500,000 ($84,000) in salary and profits but then the company collapsed, leaving her with a crucial decision: whether to accept another salaried job or start her own business.

Her eureka moment came when she realised that as China's economy began its upward trajectory in the mid-1980s, demand for paper - especially for packaging its growing exports - would also soar. But China's forests, decimated after thousands of years of cultivation and with a quarter of the world's population to sustain, were unable to produce sufficient pulp for its paper mills, creating a lucrative market for secondary raw materials, such as recycled or "recovered" paper. She had hit on the idea of trading wastepaper after helping her mainland boss earn a tidy profit transporting paper from northern China to Guangdong. China's paper mills used mostly straw pulp then.

Asked what made her gamble her lifesavings, Zhang says she was inspired by Ashin, a once popular Japanese television soap opera in which the main character, Ashin, starts and runs her own business successfully by being diligent and patient. "At the time I was considering whether to go back to [China] and I observed people selling tofu or pickle by the roadside. I believe one's success comes step by step. I chose this industry because I recognised the potential. Developed countries were using recycled paper but in China we only used straw which was polluting the environment severely."

By 1990, as the speed of China's economic growth became breathless, she realised that Hong Kong was far too small a collection pool for the volumes that China would need. She and her husband, a Taiwan-born Chinese-Brazilian citizen trained as a doctor, moved to southern California where the 1960s flower power era had spawned the world's biggest recycled paper industry. The couple set up American Chung Nam as a paper recycler exporting huge volumes to China, much of it to several paper mills they now co-owned.

By 2001 this family company had become the top US exporter of wastepaper and is the source of about 10 per cent of Zhang's personal fortune. The Americans' emphasis on honesty and trust and taking a long-term view, especially building relations with and securing suppliers, impressed her. "If you buy today, but not buy tomorrow you will never succeed," she says.

In 1996 Zhang set up Nine Dragons and less than a decade later it has grown to be China's biggest container board producer, operating two state-of-the-art mills in Dongguan, in the southern province of Guangdong and Taicang, near Shanghai, that employ several thousand staff.

This year's profit more than quadrupled to 1.38 billion yuan, and Zhang intends to make Nine Dragons the world's biggest container board producer.

China's nouveau riche have a reputation for being flashy, but Zhang exudes the plain-speaking confidence that has helped triple the share price of Nine Dragons since its public listing in Hong Kong in March. The only signs of her wealth are a discreet but still stunning diamond ring on her right hand and a large but elegant deep blue sapphire and diamond necklace. Her unvarnished but manicured nails punch the air energetically as she emphasises her points. No, she says, she isn't worried about the extra scrutiny that topping China's rich list brings, which has seen other Chinese tycoons brought down by scandal, unpaid tax and corruption investigations.

"I'm not afraid of being No. 1. As a listed company everything at Nine Dragons is transparent. As I explained to you … I accumulated my fortune by arduous work, penny by penny."

Zhang handles much of the strategy, her multilingual husband is chief executive officer and looks after manufacturing technology, and her brother looks after general management.

She has two sons, 24 and 14, both in Los Angeles. The older son is in graduate school and is a non-executive director. But asked about the future, Zhang, mindful of the shareholders, is quick to point out that no child of hers will inherit unless he is worthy.

"Our profit comes from two aspects, one is human resource which can't be evaluated by money. Anyone who is going to continue the business, even for a century and including my son, must love the industry and have leadership potential. If my son is not interested, I won't put my business into his hands."

How to convert "trash" to "gold". Capitalism at work! 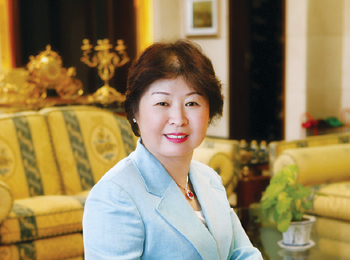