Inquiry - Jared Guinther's parents call the Army's actions fair, saying they just wanted to "get our son out"

The U.S. Army has disciplined two recruiters who were involved in signing up a Portland teenager with autism, military and congressional officials confirmed Wednesday.

S. Douglas Smith, a civilian spokesman for the U.S. Army Recruiting Command in Fort Knox, Ky., said a military investigation found that one of the two recruiters improperly concealed 19-year-old Jared Guinther's disability, which should have made him ineligible for service.

That recruiter, Cpl. Ronan Ansley, has been relieved from recruiting duties and will be reassigned.

Investigators could not prove that Velasco tried to hide the fact that Guinther is autistic, Smith said, but cited the recruiter "for errors or lack of attention to duty." Velasco will continue recruiting in Southeast Portland.

"At least we can tell the public when we have an allegation, we take it seriously and take the right steps," Smith said Wednesday.

The Army rescinded Guinther's recruitment two days after The Oregonian reported in May that he had been signed up to be a cavalry scout, one of the Army's most dangerous jobs. The story made national news, and Rep. Earl Blumenauer, D-Ore., whose congressional district encompasses Portland, called for an investigation.

"We didn't want to have the recruiters' lives ruined over this," he said. "We just wanted them to admit what they'd done and get our son out of his enlistment obligation."

Paul Guinther and his wife, Brenda, told The Oregonian earlier that their son was diagnosed with autism at age 3 and did not know there was a raging war in Iraq at the time he began talking to recruiters.

The Guinthers said they had unsuccessfully appealed to recruiters to review Jared's medical and school records before finalizing his enlistment. The records detailed his long history with autism, a developmental disability that can interfere with the ability to communicate and process emotions.

The Portland Army Recruiting Battalion Headquarters opened an internal investigation in May. Velasco did not return a phone call Wednesday seeking comment, and Ansley could not be reached.

Military policies forbid enlisting anyone with a mental disorder that interferes with school or employment, unless a recruit can show he or she hasn't required special academic or job accommodations for a year.

Jared had been in special education classes since preschool. Through a special program for disabled workers, he has a part-time job scrubbing toilets and dumping trash. He scored 43 out of 99 on the Army's basic entrance exam. A score of 31 is the lowest the Army allows for enlistment, military officials said.

The Guinthers said their son, who graduated this year from Marshall High School, failed the Army test the first time he took it.

Maj. Curt Steinagel, commander of the Military Entrance Processing Station in Portland, said in May that the papers filled out by Jared's recruiters contained no indication of his disability.

Paul Guinther said Jared, who plays guitar, has started a rock band and is thinking about trying some community college classes next year. Although initially disappointed that he couldn't join the Army, Jared now understands what happened and is "very relieved" that he won't be going to Iraq, his father said.

He said Jared penned a letter of thanks to Blumenauer, who had written Defense Secretary Donald Rumsfeld demanding an investigation into the case. Blumenauer issued a statement Wednesday saying military recruiting practices need an overhaul.

"I am pleased to see the Army take action in response to the young autistic man that was recruited from a Portland station," the congressman said, "and I am anxious to hear their plan to prevent these situations from occurring in the future."

To: DuxFan4ever
Sounds to me like a "lose-lose" situation for the recruiters. They're under quite a bit of pressure to bring in new recruits and damn near half the male population could be found to be "autistic" if they had the right doctor to sign off on the diagnosis.
3 posted on 08/10/2006 11:07:34 PM PDT by Drew68
[ Post Reply | Private Reply | To 1 | View Replies]
To: DuxFan4ever

Dang! You recruit a few boys who can concentrate on the sight picture and trigger, then THIS happens!

Well, this one is claimed to have a documented autism history stretching back for 16 years - it does not sound like something concocted for enlistment disqualification purposes. If true, then the recruiters screwed up.

Min score is 31, the autistic/special ed kid score 43? He must have had some 'help' from the office staff. --

That said, I can image that a military recruiter is the loneliest job in Portland....
6 posted on 08/10/2006 11:16:20 PM PDT by ASOC (The phrase "What if" or "If only" are for children.)
[ Post Reply | Private Reply | To 1 | View Replies]
To: GSlob
Well, this one is claimed to have a documented autism history stretching back for 16 years - it does not sound like something concocted for enlistment disqualification purposes.

Also says he graduated from high school. Should be good enough to serve his country.

I mean, c'mon! What do we expect every recruit to be a freakin' Rhodes Scholar? Everybody knows that autism diagnoses are given out to practically any young boy who can't sit still in class.

Forrest Gump seemed to do pretty well in the army!

This was continuously documented for 16 years. Try to find a family doctor who will stick around for a quarter as long.

If he got a 43 on his ASVAB, he is more than qualified to serve. And hanging these E-4 corporals out to dry for signing him up is pretty lousy.

I can tell you all about autism. I have a family member who was diagnosed. When people think "autism" they think of "Rain Man." Not every autistic child is nearly as affected.

Graduated from high school - from special ed classes. I would expect every recruit to be able and willing to stand at attention - to receive, understand and carry out his sergeant's orders. That's not being a Rhodes scholar, but a non-negotiable minimum.

So sorry, the military regs spell out that this recruiter was clearly out of bounds.

We need to recruit all the killer zombies that pester those small southern towns - they can only be killed by head shots, and don't need any more sleep.

WHat in the world does that mean?

14 posted on 08/11/2006 12:18:49 AM PDT by Choose Ye This Day (Why does our government "of the people" do things the people don't want--overtax & overregulate us?)
[ Post Reply | Private Reply | To 2 | View Replies]
To: GSlob
Depending on his function level and particular manifestations he might be ideal for certain jobs....I have a friend who is very high functioning and he would be an excellent aerial recon interpreter or really anything that requires high concentration and incredible attention to detail, trouble is, somebody would have to drag him out of his chair once he got started or he'd stay at it through an artillery barrage.
15 posted on 08/11/2006 12:42:57 AM PDT by Uriah_lost (http://www.wingercomics.com/d/20051205.html)
[ Post Reply | Private Reply | To 11 | View Replies]
To: Cheney-In-2008

not exactly sure why its funny

The poor guy spent his life in special education classes and evidently only has the I.Q. to do menial tasks like empty the trash. I'm not an expert, but I think an Army scout has to be able to understand and remember complex orders and may often be in a situation requiring snap decisions. Anyone in the military should have good situational awareness and this guy did not even know there was a war going on? Someone as oblivious as that is likely to wander into trouble. I think he would have been a danger to himself and others.

And start a rock band, and plan to go to college... 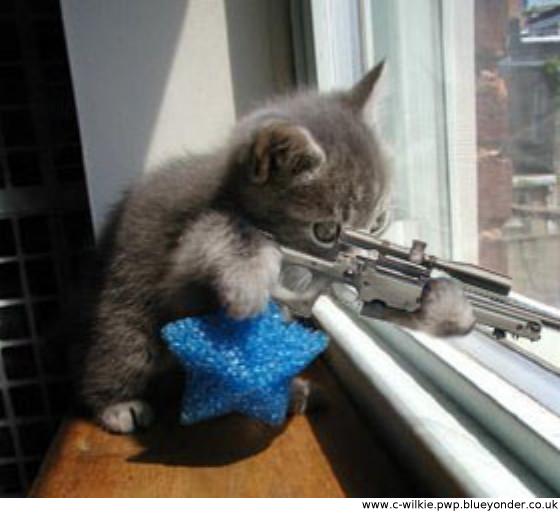