Lew Anderson, who captivated young baby boomers as the Howdy Doody Show's final Clarabell the Clown, has died at the age of 84.

The musician and actor died Sunday in Hawthorne of complications of prostate cancer, said his son, Christopher Anderson.

Long mute as Clarabell, Anderson broke the clown's silence in the show's final episode in 1960. With trembling lips and a visible tear in his eye, he spoke the show's final words: "Goodbye, kids."

Though Anderson was not the only man to play "Buffalo Bob" Smith's mute sidekick, he was the best, Smith said in his memoir.

With the Peanut Gallery looking on, Anderson used bicycle horns to give yes and no answers. For more expressive moments, he wielded a bottle of seltzer.

The show, which launched in 1947 when televisions were still a novelty, was the first network weekday children's show. Anderson joined "Doodyville," a circus town peopled with puppets and human actors and watched by a Peanut Gallery of kids, in the mid 1950's. 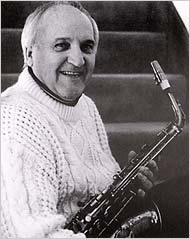 1 posted on 05/18/2006 3:46:44 PM PDT by STARWISE
[ Post Reply | Private Reply | View Replies]
To: STARWISE
Bless you Lew, thanks for the memories.
2 posted on 05/18/2006 3:48:49 PM PDT by rockabyebaby (Say what you feel, those that matter don't mind, those that mind don't matter.)
[ Post Reply | Private Reply | To 1 | View Replies]
To: rockabyebaby
Before there was Big Bird, Barney or SpongeBob, there was Howdy Doody and his friends in Doodyville. Baby boomers grew up with "The Howdy Doody Show," which began in December 1947 at a time when only 20,000 homes in the country had television sets. It was the first network weekday children's show, the first to last more than 1,000 episodes and NBC's first regularly scheduled show to be broadcast in color.

When it ended on Sept. 24, 1960, after 2,243 episodes, it was Clarabell who had the show's last words. Since until then he had only honked, they were also his first words.

The camera moved in for a close-up of Mr. Anderson, who had a visible tear in his eye. A drum roll grew louder and then died. With quivering lips, Clarabell whispered, "Goodbye, kids."

When Lewis Burr Anderson was born on May 7, 1922, in Kirkman, Iowa, nobody envisioned he would become a clownish celebrity. He was not the first Clarabell: that was Bob Keeshan, later known as Captain Kangaroo. He was not even the second Clarabell. That was Bobby Nicholson, who went on to play J. Cornelius Cobb on the show.

What seems certain is that Mr. Anderson was Clarabell for an overwhelming majority of "Howdy Doody" shows from 1954 to 1960. In the opinion of Buffalo Bob Smith, who originated and starred in the show, he was also by far the best, according to Mr. Smith's memoir.

I had a Princess Summerspringwinterfall hand puppet.

The show was rebroadcast in Japan in the late 50s on NHK. It was dubbed in Japanese.

I won the Howdy Doody beautiful smile contest, at Macy's in NYC, when I was 4. I got a Howdy puppet. Still have the picture; it's a conversation piece. That was 56 years ago!

It was Princess SummerFallWinterSpring ... great growing up with the show, wasn't it?

The Howdy Doody Show actually morfed into The Today Show.