What does it take to change light bulbs on the 75-foot rotunda ceiling of the massive Secaucus rail station?

First, crack a hole in the roof big enough to drive a crane through. Then, hoist a crane onto the roof using, well, another crane. Build a ramp, widen a doorway and protect the interior floor with some plywood.

Then you can start thinking about unscrewing a light bulb.

The $700 million Secaucus Junction station was built with no easy way to change the bulbs that surround the rotunda skylight. And as more and more lights have grown dim over the past several months, bringing in a crane was the only solution.

Mark Sheeleigh of Manhattan-based Brennan Beer Gorman, the architecture firm that designed the station, had a ready answer.

"We were going for something dramatic, similar to the waiting areas in old stations, like Hoboken," he said, when asked about other solutions such as scaffolding or catwalks. "Scaffolding might block the skylight."

The cost of the operation will be covered under NJ Transit's maintenance contract with Control Building Services of Secaucus, agency spokeswoman Penny Bassett Hackett said.

A spokesman for Control could not provide a total figure, but crane rental alone will likely top $10,000. Then manpower, carpenter work and the bulbs themselves -- 608 of them -- must be accounted for.

Rail commuters were dumbstruck when they learned of the Secaucus high-wire act.

"Any large facility, like a sports arena or a convention hall, builds in simple, inexpensive ways of performing routine maintenance, but not this one, I guess," said Mahwah's Gene Corrado, who passes through the station twice a day.

"This is the most ridiculous way to change a light bulb that I've ever heard," said Donovan, of Glen Rock. "Are these the same people who built the exit ramp to nowhere?"

But NJ Transit and Control dismissed any notion that the cost or work involved was extreme.

"Architects design these beautiful buildings and they don't think about how you're going to maintain them," said Control's district manager, Peter Manetti. "But it's just high. It's something that can be done."

"It's standard operating procedure," insisted Tom Gallo, the station's operations manager. "It's no different from the kind of maintenance they do at malls."

The operation began in Tuesday's early morning hours, but it's not over yet.

Here's how it was done:

First, a large crane was rented to hoist a smaller crane, known as a Denka Lift, onto the roof of the station, Gallo said. The lift was rolled though a hole cut in the roof onto a makeshift ramp and into a storage room. A doorway was cut out of a wall to give the crane access to the corridor that leads to the rotunda.

Plywood was positioned to protect the stone floor while the crane moved some 200 yards down the corridor. It was anchored to the rotunda floor, where a worker climbed inside a bucket and was hoisted to the ceiling.

The cost to rent a Denka Lift exceeds $4,000 a week, according to United Rental of Ridgefield Park, which supplied the interior crane. A spokesman for Dun-Rite, a heavy-equipment rental firm in the Bronx, would not provide figures for the cost to lease the larger crane.

United Rental salesman Brian Law said it was known from the start that replacing the bulbs would be a problem.

"We tried to get NJ Transit to put the cost of a lift into the construction contract, but they weren't interested at the time," he said.

Cathedral ceilings were common in old-fashioned rail centers, like the Hoboken station, said Sheeleigh, and they are common today in malls and office parks. With its impressive 2,000-square-foot skylight at the top of the rotunda, the interior of the 900-foot-long rail station resembles a mall or office building in some ways.

Although skylights are impressive, architects agree that one of their disadvantages -- besides the fact that they often leak and are difficult to clean -- is that the glass on the ceiling limits the amount of surface space available to install electric lighting.

Unless lights are attached to hydraulics that can lower them to the floor, or they're accessible via built-in scaffolding, replacing them one at a time can be impractical, said Sheeleigh and Bassett Hackett.

"We don't replace them as they burn out," said Bassett Hackett, the NJ Transit spokeswoman. "We usually replace a group of them, and we coordinate this operation with other uses for the crane, such as cleaning."

Asked when the lights had last been replaced, Gallo said it had been about two years. Actually, this week is the first time. The station opened 28 months ago and the lights have been slowly burning out since then.

John Cichowski, The Record's Road Warrior, can be e-mailed at: cichowski@northjersey.com

"It's standard operating procedure," insisted Tom Gallo, the station's operations manager. "It's no different from the kind of maintenance they do at malls."

Oh yeah, they cut holes in the ceilings of malls all the time, and rent a crane to lower another crane to change the light bulbs every few months. And the taxpayers pay for it too. I’m pretty sure.

An inefficient, outrageously expensive, boondoggle is a fitting tribute to that corrupt reanimated corpse of a Senator. No doubt his handler Torricelli gets a cut of the crane rental fees and the carpentry work. You just hand him the brown paper bag of cash and begin sawing. 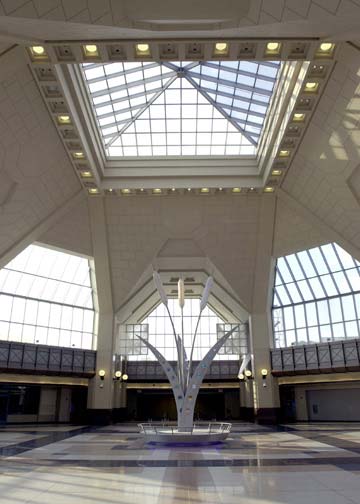 The Carpenters union, the Electricians union, AND the Crane Operators union all got a piece of this one.

Of course, no one thought about a cherry picker.

Why does he have a rail station named after him?

6 posted on 04/13/2006 8:12:47 AM PDT by nuconvert ([there's a lot of bad people in the pistachio business])
[ Post Reply | Private Reply | To 1 | View Replies]
To: dead
An inefficient, outrageously expensive, boondoggle is a fitting tribute to that corrupt reanimated corpse of a Senator

That was so good I hope you don't mind me highlighting it!!

7 posted on 04/13/2006 8:15:35 AM PDT by Neverforget01 (Proud enemy of the drive-by-media)
[ Post Reply | Private Reply | To 1 | View Replies]
To: dead
LOL! It figures! I have been driving past the Lautenberg Rail Station for the past 9 years. It's has only been within the past year that they have constructed a ramp off the Turnpike to get to it! BTW the cost to build the rail station was 400 million! What a boondoggle!
8 posted on 04/13/2006 8:16:13 AM PDT by alice_in_bubbaland (No Amnesty for Law Breaking Illegals!)
[ Post Reply | Private Reply | To 1 | View Replies]
To: nuconvert
Because he died tragically a couple years back. They didn't want to pay for his grave, so they shipped his corpse off to the Senate and named the station after him.

Don't worry, everybody that had to be paid got paid. That's how its done. Don't ask questions.

9 posted on 04/13/2006 8:17:35 AM PDT by dead (I've got my eye out for Mullah Omar.)
[ Post Reply | Private Reply | To 6 | View Replies]
To: martin_fierro
"Architects design these beautiful buildings and they don't think about how you're going to maintain them," said Control's district manager, Peter Manetti.

That's ridiculous. Only a bureaucrat could make such an incredibly stupid utterance. (Unless, of course, we're talking about architechs who are government employees. In that case, he may possibly be correct.)

10 posted on 04/13/2006 8:19:52 AM PDT by Bob
[ Post Reply | Private Reply | To 2 | View Replies]
To: alice_in_bubbaland
Yeah, apparently they built a ramp off the turnpike so you can easily drive to the rail station, and then didn't provide any public parking at the station.

Sooooo typical of taxpayer-financed government projects: they don't care about maintenance costs down the road, much less if their design is prone to be faulty (skylights are ALWAYS disasters!).

First, a large crane was rented to hoist a smaller crane, known as a Denka Lift, onto the roof of the station, Gallo said. The lift was rolled though a hole cut in the roof onto a makeshift ramp and into a storage room. A doorway was cut out of a wall to give the crane access to the corridor that leads to the rotunda.

Ok, so according to Denka Lift's site,

"This amazing aerial lift accesses heights of up to 91 feet, yet passes through a 36 inch wide door (Atrium Series). The 91 foot model and the 81 foot model weigh 5650 pounds and 4950 pounds respectively, making it the lightest weight aerial lift in the world in its height range."

So why is it they couldn't get it into the building other than through the roof? Worse case, if there wasn't a door, how about via the train tracks?

A relatively busy day at the Secaucus station.

Naw, makes too much sense.

19 posted on 04/13/2006 9:11:01 AM PDT by holyscroller (A wise man's heart directs him toward the right, but the foolish man's heart directs him to the left)
[ Post Reply | Private Reply | To 15 | View Replies]
To: dead
"Architects design these beautiful buildings and they don't think about how you're going to maintain them," said Control's district manager, Peter Manetti.

No Peter, that's exactly what architects are suppose to think about and plan for, that's what we pay them for.