Let others sneer at Southeast Alaska's so-called "bridge to nowhere." Leaders in Ketchikan, the small port town on the receiving end of the project, call it a bridge to the future. The $223 million two-bridge project would connect the town's airport to Revillagigedo Island, where most of the 13,000 residents of the Ketchikan Gateway Borough live. The airport is separated from its users by a quarter-mile-wide channel of water, forcing travelers to catch either a ferry or a water taxi.

Some Ketchikan leaders want to rename the airport after Rep. Don Young, R-Alaska, for the all the federal money he's brought to the area, including the bridge. Young is chairman of the House Transportation Committee. But critics in Alaska and elsewhere say the funds earmarked for the bridge and some other projects in the federal transportation bill would be better spent on hurricane recovery.

Jack Shay, a member of the Ketchikan Borough Assembly who proposed the renaming the airport after Young, said he would have no problem deferring the funds for a year if the money is instead used on Gulf Coast projects. But he disagrees with opponents who say the bridge is a boondoggle.

"We've only been a state relatively short time, so we're way behind the other states," Shay said. "Don Young has been a great help catching us up with other states."

"Because of its geographical location, Ketchikan has long been recognized as the 'Gateway to Alaska,'" Young wrote. "Yet the community is accessible only by air and sea and has run out of land."

TOPICS: Business/Economy; Culture/Society; Government; News/Current Events; Politics/Elections; US: Alaska
KEYWORDS: bridgetonowhere; federalbudget; federalspending; ketchikan; spending Navigation: use the links below to view more comments.
first 1-20, 21-22 next last
1 posted on 10/08/2005 3:07:14 AM PDT by Crackingham
[ Post Reply | Private Reply | View Replies]
To: Crackingham
Why is it that people choose to live in a location and then expect others to fund their improvements?

Federal funding of projects that are entirely local in scope is insane.

October 07, 2005
Friday PM
Rep. Don Young stated, "The community (Ketchikan, Alaska) is accessible only by air and sea and has run out of land." I agree with some of that statement but there are plenty of other communities in Alaska that are only accessible by air and sea today with bridges in their communities such as; Juneau/Douglas, Sitka/Mt. Edgecombe, and Kodiak, Alaska. I disagree that Revillagigedo Island (where Ketchikan is located) is running out of land to expand. Ketchikan can expand economic growth to the North and South of town.

These bridges in Alaska were built at the right time and were affordable then. America is going through trying times and challenges - the Iraq War, Hurricane Katrina and Rita victims, Oil crisis and National Debt. We need to take care of Americans first in the South that were hit by Hurricane Katrina and Rita and it is going to take a lot of money.

In closing, sorry we or I can not afford Don Young or the few opulent people in Ketchikan that want a bridge to another island that 15 families live on and the high risk land speculation to federal tax payers' expense. What Rep. Don Young and all Americans need to give up are pork barrel funding in their states from the Transportation Bill to help Americans in need first. This is my own opinion shared by others.


Stephen Reeve, project coordinator for the Ketchikan borough government said, "the bridge will be a force for change. " I can't imagine a few opulent people are ramming a proposed bridge project to force change down our throats to Gravina Island via Pennock Island in Ketchikan, Alaska. $315 million of your federal tax dollars is being wasted on speculation.

There are only 15 families that actually live on Gravina Island. I will bet that most of these folks move to Gravina Island for peace and quiet, privacy.

The master plan by termite people in Ketchikan is access to timber. There is nothing that the termite people will do on Pennock Island and Gravina Island that will benefit the residents of Ketchikan but bring higher taxes and destruction of the beauty of land that rest of Americans come to see.

Let's not forget, Governor Frank Murkowski has a 33-acres of family owned land, Goldstring and Goldstone old mining sites just south of Clam Cove on Gravina Island. Governor Frank H. Murkowski has a conflict of interest and hidden motivations to construct a $315 million bridge to Gravina Island VIA Pennock Island to property his family owns at federal taxpayer's expense. It is my own opinion that this is only a payback for years of friendship from Rep. Don Young (Alaska).

Hurricane Katrina, the $315 million federal tax dollars for the desecration bridge would be better spent to help victims of Katrina and cities destroyed by the hurricane.

In closing, my advice to the few people that want to bridge to nowhere, don't count your chickens before they hatch. The American people may want to spend all the pork barrel money on something worthwhile like helping Americans that are in need.

I would like to say thank you to Ketchikan Fire Dept and volunteer Fire Dept for traveling to help Katrina victims in the South.

This is my opinion only.

5 posted on 10/08/2005 4:03:13 AM PDT by bwteim (Begin With The End In Mind)
[ Post Reply | Private Reply | To 3 | View Replies]
To: Crackingham
"The airport is separated from its users by a quarter-mile-wide channel of water, forcing travelers to catch either a ferry or a water taxi."

Question: What does this bridge do for the benefit of new drilling and the oil industry?

Maybe there is an underlying reason for this.

7 posted on 10/08/2005 4:38:38 AM PDT by EQAndyBuzz (Liberal Talking Point - Bush = Hitler ... Republican Talking Point - Let the Liberals Talk)
[ Post Reply | Private Reply | To 6 | View Replies]
To: Crackingham
The airport is separated from its users by a quarter-mile-wide channel of water, forcing travelers to catch either a ferry or a water taxi.

Alaska isn't unique with bridges to nowhere. South Dakota with the help of Tom Daschle has a bridge spanning the Missouri river that virtually has grass growing in the cracks from lack of use. This "vital" bridge links the small university town of Vermillion with a couple of "chickens in the street" hamlets in Nebraska and was paid for with federal money.

Heck, they send a check back to their residents every year from the oil revenue.

Just carry signs with pigs on them and chant "Oink Oink Oink".
11 posted on 10/08/2005 5:27:26 AM PDT by cgbg (A cigar a day keeps secular Puritans away.)
[ Post Reply | Private Reply | To 3 | View Replies]
To: EQAndyBuzz
Question: What does this bridge do for the benefit of new drilling and the oil industry?

There is a connection, however, to all the money that Alaska sends to the Treasury. You've heard of the Permanent fund that issues checks to residents every year? That's only half of the tax that is collected - the other half gets sent to Uncle Sam. Alaskans can follow what happens to our half (There is enough money to buy every single sports franchise in the U.S.), at times we wonder what happens to the federal half. And yes, we feel entitled to some pork too.

Interesting sidenote: Years ago,in order to sweeten the deal and buy Congresscritters votes to develop ANWR, Alaskan reps. have proposed a 90/10 US/AK split of the taxes

This fiscal nonsense is sold by local politicians who say they are doing it to "improve" things.

"We're going to raise your property values. The town is going to become a more attractive place."

Of course the sales job will ignore the fact that the "higher property values" will mean higher taxes on each property that has "higher values"; and that for some the higher taxes will be budget busters; and that for some the higher values will appear simply as a chance to take a profit windfall and get out; and that in ten or fifteen years, after the bridge is completed, most of the community will not be the community that was there before the bridge - most of them will have left, for economic reasons (up or down).

But the real estate dealers and their politicos will still be there. It would not be surprising if their grandchildren propose a tunnel to the mainland.

Sure. The town on the Island should raise the bridge money with bonds pledged against property tax revenues and since the property values should go up after the bridge is completed, there should be greater property values from which to extract more property tax revenues with which to pay for the bonds. Any commercial bank worth its salt could analyze the situation and tell the town what the dividend rate the bonds would need to get them sold.

Meanwhile, a used-car salesman in Wisconsin would not be paying higher-than-otherwise-needed federal taxes so that these local yocals in Alaska can a have bridge.

South Carolina was going to get one of these too. Jim Clyburn (former head of the Congressional Black Caucus, and a Rat of course) was pushing for tens of millions of dollars to build a nine-mile bridge between two tiny towns across a swamp in his district. Fortunately, he ran head-on into trouble...with the envirowackos not wanting the "precious wetlands" disturbed. I do love it when liberals eat their own.

Alaska has it backwards. First people gather, then build a town, then infrastructure as it is needed.

The "Bridge to Nowhere" is pork, rancid pork, on a large scale.

This kind of criminal plunder is typical of the pork in any bill that passes in Congress. And because all of our honorable representatives share in the swag there is no one to protect the taxpayers' interest.

There is more than enough money in such pork to completely re-build the entire Gulf Coast and have enough money left over to buy Brazil. And remember, the president almost always signs it into law.

To build a bridge because people might someday need it is, to say the least, poor planning.

And if you're against paying for this bridge to nowhere, then you're simply a DU troll. 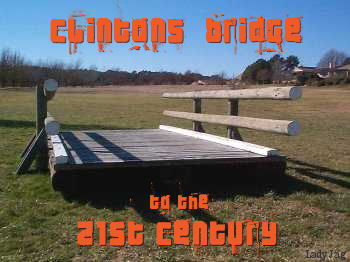 We have a bridge to nowhere in Burlington, Vermont that had to be built by federal law even though no one wanted it. Apparently if there are 2 pieces of parkland seperated by a road they have to be joined by a bridge. Insanity.

"We've only been a state relatively short time, so we're way behind the other states," Shay said. "Don Young has been a great help catching us up with other states."

"Our parasite is getting pretty good at stealing other people's money, finally."