Dressed in camouflage fatigues, the two boys waited in the woods behind the school until the lunch hour, when one of them ran into the hallway and triggered a fire alarm. As classmates and teachers filed out of the buildings Mitchell Johnson, 13, and Andrew Golden, 11, opened fire with high-powered rifles stolen from Golden's grandfather. By the time the last shot was fired four girls and an English teacher, who had attempted to shield the children from the barrage, were dead.

What happened in Jonesboro that day in 1998 awakened America to the terror of school shootings and left an indelible mark on the northeast Arkansas town that was yesterday trying to come to terms with the fact that one of the convicted murderers, Johnson, is due to walk free from prison. Golden is scheduled to be freed in 2007.

A now-closed legal loophole means the killers can only be held until their 21st birthdays, and with Johnson's birthday falling yesterday his expected release from a federal penitentiary in Memphis has re-opened old wounds in the town, with many residents questioning whether justice has been served in the case.

It has also drawn a sharp reaction from gun control campaigners, who criticised the fact that because Johnson was convicted as a minor his criminal record will be wiped clean and he will be allowed to buy a gun.

Whitney Irving, a student at Westside Middle School, was shot in the back but survived the attack. Although she has since graduated from high school, married and had a child, the attack remains a part of her everyday life.

"A lot of people are really scared to this very day and we have not forgotten anything," she told the Associated Press.

Mitchell Wright, whose wife Shannon was the teacher who was killed, said he has tried to explain Johnson's release to his son, who was two at the time of his mother's death.

"He's told me, 'I don't think it's right he gets to go home to his momma and I only get to see my momma on videos'," Mr Wright said.

The Jonesboro shooting was the first major schoolyard assault in which teenagers attacked their classmates.

Less than a year later 13 died, along with two young gunmen, at Columbine High School, Colorado, while in March this year 10 people were killed when a student opened fire at a school on a native American reservation in northern Minnesota before turning the gun on himself.

Dale Haas, the sheriff at the time of the shootings and now a judge in the town, believes Johnson and his accomplice are getting off too lightly. "We forget what they had done," he told the Arkansas Democrat-Gazette. "They killed somebody with malice ... Would you really want them as your neighbours?"

Kenneth Heard, a reporter who covered the shooting and the trial, said: "This town is hurting. It is bringing back a whole load of bad memories for a lot of people."

Johnson's mother, Gretchen Woodard, said her son would not be moving back to Arkansas; instead he would enrol in college - possibly a seminary - at least a day's drive away.

Jonesboro's sheriff, Jack McCann, told CNN yesterday that if Johnson returned to the town "we cannot guarantee his safety".

Actually, he didn't start it, this guy did. Luke Woodham.

He got 2 life sentences and 7 20-year sentences.

I really, really hope some anonymous someone presents young Master Johnson with the bill.

Having got that off my chest, let us not forget the accomplices here. The sensationalist media should be given due credit for their part in making schoolhouse massacres a grand american tradition.

Seven years for five deaths? Is that how much a life is worth in Arkansas?

Johnson may be scum, but he is a free man under our system of laws. For a sheriff to make a veiled threat like this is inexcusable. Either uphold our laws or don't be a sheriff. What if he had said this same thing about a racial minority or a conservaitve politician who might move to the town?
6 posted on 08/12/2005 10:38:27 AM PDT by Stone Mountain
[ Post Reply | Private Reply | To 1 | View Replies]
To: Stone Mountain

Truth is, law enforcement cannot guarantee anyone's safety, his your or mine, they can only investigate the aftermath. It is just a blanket and empty statement.

7 posted on 08/12/2005 10:43:10 AM PDT by One Proud Dad
[ Post Reply | Private Reply | To 6 | View Replies]
To: One Proud Dad
Truth is, law enforcement cannot guarantee anyone's safety, his your or mine, they can only investigate the aftermath. It is just a blanket and empty statement.

Of course the statement is technically true. But it's also clear that it's a veiled threat. Again, what would you think if this sheriff had said, "Yeah, this black guy can move into our town if he wants. But we sure can't guarantee his safety." All true, but the intent of what he is saying is perfectly clear.
8 posted on 08/12/2005 10:47:19 AM PDT by Stone Mountain
[ Post Reply | Private Reply | To 7 | View Replies]
To: Stone Mountain
Johnson may be scum, but he is a free man under our system of laws. For a sheriff to make a veiled threat like this is inexcusable. Either uphold our laws or don't be a sheriff.

Another way to look at it: cops can't, and don't, protect anyone--they wait until you're murdered, and try to figure out who did it. So when he says it about this scumball, he's really just grandstanding.

True, but his intent is clear. See my post 8.

So when he says it about this scumball, he's really just grandstanding.

Understatement of the year my FRiend.

I remember seeing something about a guy who was recommended a 5005 year sentence by the jury. The judge thought it was rediculou and shortened it to 1001 years

Yes. Compared to the "Clinton Curve", this POS served a long time.

I do say it's not a threat: the sheriff has no intention of harming the guy, and if someone kills him, the sheriff will investigate. He's merely venting his own and the community's outrage, in a statement which is harmless because it's self-evidently true--if someone wants to rub the guy out, a town full of cops won't make any difference.

I would agree that the sheriff intended to sound macho. I don't know if his job is elected--some sheriffs are--but his remarks probably resonated with the locals. Nevertheless, the guy has nothing whatever to fear from that sheriff.

He could, and maybe should, get in trouble for saying things that suggest he might be less than diligent investigating the guy's death, but that's not the same thing as an actual threat.

What I believe the Sheriff is saying is that he doesn't have enough manpower to protect the murderer.

Guess we'll have to agree to disagree then. I believe if he were talking about resources, he would have come out and said so. If he had said the same thing about someone else (like my black person example above), would it still be just as acceptible?
17 posted on 08/12/2005 11:17:55 AM PDT by Stone Mountain
[ Post Reply | Private Reply | To 16 | View Replies]
To: Shalom Israel

Do you think he's encouraging vigilantism by coming out and telling everyone that he's not capable of protecting this person? Sorry, it still sounds like a veiled threat to me - "if you move into this town, don't expect that the sheriff's department will protect you." It wouldn't be so bad if someone else had made the statement - but the sheriff is in charge of protecting the people in his jurisdiction. When the person in charge of law enforcement of a town comes out and says he can't protect someone, he's basically telling other people to have at him since the police are incapable of protecting him.

Would you have any problem with the sheriff making the statement about other people (like the black man quote I referenced above?) 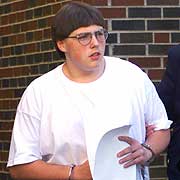 
In the boys' hometown, some wonder if justice has been done.

"How could anyone think (Johnson or Golden) would be rehabilitated?" Dale Haas, the former sheriff, said to the Associated Press.

19 posted on 08/12/2005 11:26:56 AM PDT by kcvl
[ Post Reply | Private Reply | To 1 | View Replies]
To: Asphalt
Gretchen Woodard still lives near the Westside Middle School, where her son, Mitchell Johnson, then 13, and another boy, Andrew Golden, then 11, staged a fire drill and opened fire on the children and teachers as they exited the building. Five people were killed and ten were injured.

Woodard told the Arkansas Democrat-Gazette that it wouldn't be wise for her son to move back to Arkansas. She says she can guarantee that he won't be. She hinted that Johnson will move at least a day's drive from Jonesboro and enroll in college. She says he is sorry for his part in the slayings and she hopes people will give him a chance to do good.