In a long-awaited decision, President Bush finally named tough-talking John Bolton as U.S. ambassador to the United Nations. And not a day too soon, as the U.N. General Assembly is set to reconvene in September.

The problems at the United Nations are legion: the Oil-for-Food scandal, the sexual escapades of the U.N. peacekeepers, the laughingstock that the Human Rights Commission has become, the U.N.’s utter failure to stem the AIDS epidemic, and many others.

But there’s another scandal that people are trying to keep under wraps -- the fact that dozens of agencies and offices sprinkled throughout the vast U.N bureaucracy have become base camps for ideological feminism.

Feminists view every human issue through the lens of gender and power. So whatever the problem -- poverty, disease, or a shortage of parking spaces – the standard refrain of the Sisterhood is “Down with the patriarchy!”

At the U.N., benign male-bashing has become distant memory. What now passes as normal feminist discourse at the United Nations ranges from outright gender prejudice to high-octane bigotry that resembles an Andrea Dworkin rant.

The bias begins at the top. At a 2003 International Women’s Day observance, Louise Frechette issued this categorical imperative: “all our work for development -- from agriculture to health....must focus on the needs and priorities of women.” [www.un.org/News/Press/docs/2003/dsgsm189.doc.htm] But not men or children?

Ms. Frechette, by the way, is Deputy Secretary-General of the United Nations and reports directly to Kofi Annan.

Carol Bellamy, former UNICEF director, once made a similar plea for Africa: “Women are the lifeline of these southern African communities. They put the food on the table, and they're the ones that keep families going during such crises.” As a consequence, according to the UNICEF press release, “Women and children must be at the center of response to Southern Africa's humanitarian crisis.” [www.unicef.org/newsline/2003/03pr21southernafrica_printer.htm]

Last December the UNAIDS published its report, Women and AIDS. It is not possible to describe the gender vilification that oozes from this document, but suffice it say that it reads like a master’s thesis from a Women’s Studies program. [www.washtimes.com/commentary/20041205-123305-3151r.htm] The U.N. refugee program issued the following plea on its website: “The United Nations High Commissioner for Refugees...One million women and children...homeless, hungry, helpless...Their only help is you.” (http://unhcr.org/).

Does that mean men are never homeless, hungry, and helpless? Or that their plight simply deserves less sympathy?

When it comes to domestic violence, the U.N. subjects men to the most pernicious stereotypes. It has been shown that women are fully the equal of men when it comes to partner aggression. [www.csulb.edu/~mfiebert/assault.htm]But the WHO report Violence and Health dismisses that fact with this disingenuous remark: “Where violence by women occurs, it is more likely to be in the form of self-defense.” [www5.who.int/violence_injury_prevention/main.cfm?p=0000000682]

More disturbing is the casual way that the U.N. regards the lives of men.

In years past, the rallying cry for the World Health Organization was “Health for All.” But now, the WHO’s goals have become somewhat more modest: “Make Every Mother and Child Count.” [www.who.int/whr/en/]

Should we now conclude the lives of men no longer count?

One WHO report offers this explanation why women outlive men in countries around world: “as many societies have undergone economic and industrial development, a variety of social and cultural factors have combined to allow women's inherent biological advantage to emerge.” [www.who.int/frh-whd/GandH/GHreport/gendertech.htm]

“Inherent biological advantage”? I thought a certain European war taught us a lesson about the evil that lurks when persons make claims about persons’ inborn genetic advantages.

In 2000 the U.N. Security Council passed Resolution Number 1325 which makes the claim, never supported by hard numbers, that, “civilians, particularly women and children, account for the vast majority of those adversely affected by armed conflict.”[www.un.org/events/res_1325e.pdf]

Apparently the Security Council had forgotten about places like Srebrenica, Afghanistan, Rwanda, Cambodia, and elsewhere where millions of innocent civilian men were specifically targeted for elimination. [www.gendercide.org/gendercide_and_genocide.html]

The UNESCO Universal Declaration on Bioethics and Human Rights advocates that quality health care and essential medicines be provided “especially for the health of women.” [http://portal.unesco.org/shs/en/file_download.php/11445d5a75d2306d7437f0626f35e1c1Draft_EN.pdf]

So why not quality health care and essential medicines for men?

Ignoring the life-and-death needs of men, categorically blaming males for the woes of women, and claiming women are a biologically-superior species – these are the hallmarks of a morally-bankrupt organization that is destined to go the way of the League of Nations.

Oftentimes a structure infested with pests must simply be razed rather than fumigated and repaired. The UN is just such a structure. Simply get rid of it. It is beyond repair.

3 posted on 08/02/2005 7:53:08 PM PDT by Lawgvr1955 (Never draw to an inside straight.)
[ Post Reply | Private Reply | To 1 | View Replies]
To: CareyRoberts
The problems at the United Nations are legion: the Oil-for-Food scandal, the sexual escapades of the U.N. peacekeepers, the laughingstock that the Human Rights Commission has become, the U.N.’s utter failure to stem the AIDS epidemic, and many others.

And they want to manage the Internet. Fat chance.

I would agree that feminism is one of the root causes of much of the problems in the US but in the third world men DO cause most of the problems and often largely behave as an inferior species.

I should add, as far as the UN goes the US should expose it for the criminal enterprise it is and then pull out.

my knowledge of history is a little vague. was it FDR or truman that got the US into this cesspool?
Abolish the UN and never replace it.

According to Fox News, "Four years into the seven-year Oil-for-Food program with graft and mismanagement by then rampant, Fréchette intervened directly by telephone to stop United Nations auditors from forwarding their investigations to the UN Security Council."

Born in Montreal, Louise Fréchette has served directly under UN Chief Kofi Annan since March 1998. According to UN documents, in November 2001, she proposed an initiative that led to a meeting to coordinate ‘anti-corruption activities’ within UN agencies. Her endeavor played a role in a February 2002, "Report of the Interagency Anti-Corruption Coordination Meeting," that reads in part; "There are plans to develop a more coherent UN ethical infrastructure through an interagency working group. It was suggested that monitoring the trust level of UN staff with regard to internal anti-corruption efforts would be useful."

The UN Anti-Corruption panel "agreed that there is a link between the credibility of the organization championing reform, the integrity of the individuals involved in the fight against corruption, and the effectiveness of the anti-corruption effort." Incidentally, the Interagency Anti-Corruption Group, instigated in part by Fréchette’s initiative, met with the First Session of the Ad Hoc Committee for the Negotiation of a Convention against Corruption. As CFP previously reported, "The United Nations Convention Against Corruption will not be ratified until early 2006," 10 years after the Oil-for-Food-Program began.

It appears the impartiality and credibility of the Volcker Committee's Investigation into Oil-for-Food is growing grim, exacerbated by Fréchette’s troubling actions during the Oil-for-Food Program, and her colliding work history with investigators and possible defendants. According to Fox News, "When [Louise] Fréchette served as Canada's ambassador to the United Nations from 1992 to 1995, her boss during most of that time was Canadian Deputy Minister Reid Morden, who is now executive director of the Volcker team." Fréchette’s current boss, Kofi Annan appointed Paul Volcker, to investigate the UN’s Oil-for-Food Program. The Volcker committee and Reid Morden have "no comment" at this time concerning Fréchette.

After leaving her first post at the United Nations, Louise Fréchette returned to Canada serving from November 1994 to June 1995, under then Minister of Finance Paul Martin, as his Associate Deputy Minister. Paul Martin held Canada's Minister of Finance position from November 1993 until June 2002, becoming Canada's 21st Prime Minister on December 12, 2003. Together, in 1995, Martin and Fréchette worked on several issues including the Halifax G-7 Summit, and participated in the "Standing Committee on Foreign Affairs and International Trade." Inquiries to Prime Minister Martin's office were not answered as of press time.

Louise Fréchette joins the illustrious Canadian connection in the UN Oil-for-Food Program, where there is her former boss, Prime Minister Martin who replaced Prime Minister Jean Chretien. Jean Chretien’s daughter, France is married to Andre Desmarais, the son of Paul Desmarais. Desmarais is the chairman and Co-Chief Executive Officer of Canada's Power Corporation, and the largest shareholder and director of France's TotalFinalElf. TotalFinalElf was one of the largest benefactors of Oil-for-Food contracts. According to the Financial Post, "In 1974, Desmarais, Sr., made Martin president of Canada Steamship Lines and then in 1981, he made him spectacularly rich by selling the company to him and a partner for $180 million." As CFP previously reported, Canada, the seventh largest contributor to the United Nations, will not investigate the Oil-for-Food Program.

UN’s Deputy Secretary-General Louise Fréchette who is headed for Sierra Leona after visiting Liberia to "emphasize the world body's zero tolerance policy for sexual exploitation and abuse by UN peacekeepers" was unavailable for comment. 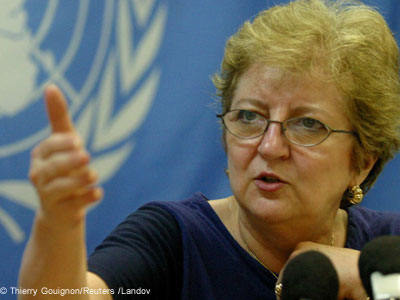 Along with her boss, United Nations chief Kofi Annan, Frechette, 59, is carefully watching repercussions from the ongoing investigation into mismanagement of Iraq's oil for food program. Frechette accepted partial responsibility on behalf of the U.N., stating in a February speech that the initial findings had "identified a weakness in our management system that we intend to correct." Years of experience in Canadian politics have helped her maneuver through the calcified U.N. bureaucracy since her 1998 appointment as the first U.N. deputy secretary general.

Louise Fréchette (born July 16, 1946 in Montreal) is the Deputy Secretary General of the United Nations and a long-time Canadian diplomat and public servant.

In 1971, shortly after graduating with a degree in history from the Université de Montréal, Frechette joined Canada's Department of External Affairs. She was posted to the Canadian embassy in Athens before joining Canada's UN delegation in Geneva in 1978.

In 1997, UN Secretary General Kofi Annan announced a series of reforms at the world body, including the creation of the position of deputy secretary-general to handle many of the administrative responsibilities which had previously been the resposibility of the secretary-general( The job took time away from Kofi's ski trips & socializing). Fréchette was offered the position and accepted and has been responsible for overseeing numerous reforms at the UN. In 1998, she was made an Officer of the Order of Canada.

"When people everywhere feel that they can rely on their fellow men and women in other countries to uphold and respect their rights as defined in those declarations and treaties, they will know that they do indeed belong to a world community."

"Ms. Frechette, by the way, is Deputy Secretary-General of the United Nations" oh really, will get in the kitchen and make me a sandwich Ms. Frechette

As fourth Executive Director of UNICEF, Carol Bellamy led the agency from 1995 to 2005. During her tenure, Ms. Bellamy focused on five major priorities: immunizing every child; getting all girls and boys into school, and getting all schools to offer quality basic education; reducing the spread of HIV/AIDS and its impact on young people; fighting for the protection of children from violence and exploitation; and introducing early childhood programmes in every country.

Do you truly think that "luck" will be the prevailing factor with John's endeavors at the UN?

When you're wounded and left on Afghanistan's plains, And the women come out to cut up what remains, Jest roll to your rifle and blow out your brains An' go to your Gawd like a soldier.

Women tend to set the tone of most societies. Note, for example, the greedy ululating Palestinian sows who openly celebrate their children blowing themselves up in order to snuff out some innocent Jewish lives. Women are the root cause of many problems. I'll grant children alone the status of innocence.