Political insiders tell what [Chicago Mayor] Daley must do to survive
Chicago Sun-Times ^ | May 29, 2005 | FRAN SPIELMAN AND SCOTT FORNEK

Federal indictments are making their way up the City Hall food chain. The Hispanic Democratic Organization he created has turned into a political monster at the center of a hiring scandal. He has handcuffed his own fund-raising ability. His poll numbers are headed south.

But despite all that, Mayor Daley could still win the sixth term he needs to become Chicago's longest-serving mayor if he chooses to stay and fight -- and if those closest to him don't get caught up in the scandal.

That's the consensus from a sampling of aldermen, mayoral confidants and political consultants who have no ties to Richard M. Daley.

They agree the Hired Truck, minority contracting and hiring scandals -- and a steady stream of stories about contract cronyism -- have dealt the mayor a political body blow. They also agree there's no telling where federal investigations may lead in the 21 months leading up to the 2007 election.

But no one is prepared to write Daley's political epitaph.

"Considering how much he has been beaten about the head and neck areas by the media with these scandals, his numbers are, surprisingly, not that bad," said Republican strategist Dan Proft, referring to Daley's 53 percent approval rating.

"It's premature to trumpet the demise of Mayor Daley. He is a strong political force who is not going to go away easily."

Before Daley's poll numbers took a nosedive, Jacky Grimshaw, who was director of Intergovernmental Affairs under Mayor Harold Washington, assumed Daley would not seek re-election.

"A combination of his health, Maggie's health and the scandals. Just looking at him -- he doesn't look as healthy," Grimshaw said, referring to Maggie Daley's three-year battle against breast cancer and the mayor's hypertension.

But that was before the latest wave of headlines about Hired Truck bribe money ending up in Daley's campaign fund and allegations that an army of city employees got rewards of pay raises, promotions and overtime in exchange for campaign work.

"Now that he's under fire, he just may run again," Grimshaw said. "I don't think anybody likes to be run out of office."

What, then, is Daley's guide to political survival? How does he restore credibility with Chicago voters who, according to an aldermanic ally, "used to be a given for him."

First, dismantle or emasculate HDO and sever all ties between the shadowy group run by the mayor's former political enforcer Victor Reyes and City Hall hiring and promotions.

"Whether true or not, the perception is that it is a clout-ridden ... organization that does the mayor's political dirty work," said Kitty Kurth, a Democratic consultant. "And if you want to say you're not doing any dirty work, then you have to get rid of the guys who do it, sadly.

"From a political standpoint, as a guy who is going to be up for re-election, you don't want to dismantle your troops. But I don't see what options he has."

Although Daley helped create HDO and empowered the group by putting at least half of its 1,310 deputy voter registrars on the city payroll, a mayoral confidant argued that Daley "can't dismantle it because he doesn't run it, contrary to what you [in the media] may think."

"HDO will survive if Rich Daley is alive or dead," the confidant said. "It's not his organization."

Asked if Daley would disavow HDO or distance himself from it, the mayor's longtime political consultant David Axelrod said, "I'm sure that group will probably not be as influential as it once was, just as a natural evolution. But the notion that he is relying on that organization or any one organization is not the reality. People don't vote for him because of that."

'Keep everybody on a short leash'

Daley also must overhaul a personnel process compromised by HDO and clean house in the four city departments at the center of the Hired Truck scandal: Water Management, Transportation, Streets and Sanitation and the Mayor's Office of Intergovernmental Affairs.

"At this point, his actions need to speak louder than his words," Grimshaw said.

Daley has long been a results-oriented politician who doesn't care how his employees get to the finish line, so long as they complete the race. That won't cut it anymore, O'Connor said.

"Keep everybody on a short leash," O'Connor said. "That would go a long way toward solving these problems."

No matter how many good-government reforms Daley pulls out of his trick bag, he can't undo the events that have federal investigators swarming over City Hall. So the best thing Daley can do is get out in the neighborhoods and try and change the subject to education, tax and crime issues that voters tend to care more about than corruption, the mayoral confidant said.

"The story that's alive is not about the reforms. It's all about the past. You can't stop that. All he can do is hang in there, stay with the day-to-day issues and ride this thing out," the confidant said. "That sounds stupid, maybe. But he's tried all the reforms. Stop campaign contributions. But that ain't going to stop the story."

Earlier this year, Daley said he would abolish the Hired Truck program, a promise that top mayoral aides are still struggling to accomplish. He also said he would no longer accept campaign contributions from city contractors.

'Record would measure up well'

That leaves many political observers wondering how Daley would raise the millions he needs to finance another mayoral campaign and where he would get his political foot soldiers if there's no more HDO -- especially now that he has alienated the unions representing city workers.

A marginalized or disbanded HDO would curtail Daley's ability to assist aldermanic candidates of his choosing, Murphy said. But it's not likely to hurt Daley's own chances because campaigns now rely more on television and radio advertising than precinct captains.

Such advertising costs money -- but maybe not that much, his political advisers say.

"I don't think he needs vast sums of money. He has one thing you can't buy in politics -- a real record of achievement. And none of his opponents can buy it, either," Axelrod said.

"I think his record would measure up well, not only with anyone running against him, but with mayors across the country," he said. "It's a positive story."

Still, the wild card remains U.S. Attorney Patrick Fitzgerald. No one, including Daley, knows where the trail Fitzgerald is following will end.

"If it gets very close to him, I suspect we will have a new mayor -- either because he's defeated or because he decides not to run," Grimshaw said. "It can't get too close to him if he hopes to remain mayor."

If Daley doesn't run for mayor again -- these pols might

Only time will tell whether Mayor Daley runs again -- and whether he faces any serious competition.

But make no mistake. If Daley opts out, the ensuing political battle will make the 2007 Chicago mayoral contest look like a California governor's race.

Politicians across the city will look in the mirror and see mayors staring back at them.

Folks you never heard of will start imagining themselves in that chair on the Fifth Floor. Names will be floated, "I'm flattered"-nondenials offered, ambitions unchecked and egos stroked.

And in the end, a bunch of them might actually run for mayor. Here is an early look at some of the most likely names to surface as mayoral candidates if Daley calls it quits.

Rep. Jesse Jackson Jr. PROS: National name, great orator with good fund-raising potential, down to his fighting weight, could bridge racial divides as he has done in south suburbs. CONS: Famous father could hurt as much as help.

Rep. Luis Gutierrez PROS: Leading Latino pol in a city growing more Hispanic every day, passionate advocate for immigrant rights and other causes, not afraid to mix it up. CONS: Push for clemency for members of Puerto Rican terrorist group FALN and other far-left positions could be tough sell in bungalow belt.

Cook County Circuit Court Clerk Dorothy Brown PROS: Independent Democrat with good relationship with party regulars, won praise for modernizing office and being less combative than predecessor. CONS: Denied accusations she pressured workers to buy fund-raising tickets and do political work -- but in this climate it's guaranteed to resurface as campaign issue.

Ald. Edward M. Burke (14th) and Illinois Appellate Court Justice Anne Burke PROS: One of the most powerful couples in city, they have the political know-how and contacts -- and Ed Burke already has campaign funds worth more than $2.5 million. CONS: Ed Burke would face old questions about potential conflicts of interest, so he might put his chits on his wife.

Lt. Gov. Pat Quinn PROS: Veteran campaigner, self-styled populist reformer, not afraid to shake things up, has dedicated base of true believers. CONS: Many Democratic officials can't stand him, so look for the knives to come out.

Ald. Ed Smith (28th) PROS: Head of City Council's Black Caucus, reputation for independence, respected by friends and foes. CONS: Running for Cook County Board president next year, so might not be ready for another run months later.

City Clerk Jim Laski PROS: Highest-ranking Polish American in city, rose to prominence by bucking Daley in Council and by exposing millions in debts owed by city employees. CONS: Ghost-payrolling scandal forced him to fire top aides, plus he's gearing up for state treasurer's race next year, so unlikely to make another run months later.

Sen. Barack Obama: Would be unbeatable, but probably one of few Chicago pols who considers president of the United States better job than mayor of Chicago.

Former City Treasurer Miriam Santos: Once considered a rising star, she has been tarred by corruption charges -- she pleaded guilty to mail fraud for using city workers to do campaign work.

Cook County Sheriff Michael Sheahan: Good base in Southwest Side 19th Ward, but allegations of cover-up of brutality at jail will haunt him.

Ald. Freddrenna Lyle (6th): Vocal independent Democrat, but she got caught up in a few embarrassing episodes, including griping that "$5-an-hour" Taste of Chicago workers didn't treat her like VIP.

Cook County Commissioner Michael Quigley: Another maverick on the County Board probably looking more toward presidency.

State Sen. John Cullerton: Veteran North Side legislator hasn't shown much interest in other offices since he lost 1994 congressional bid.

Chicago Housing Authority chief Terry Peterson: Former Daley aide has strong South Side base, but was embarrassed by revelations CHA contractors were big contributors to his old 17th Ward organization.

The who's who of Chicago mob is mentioned in this article. 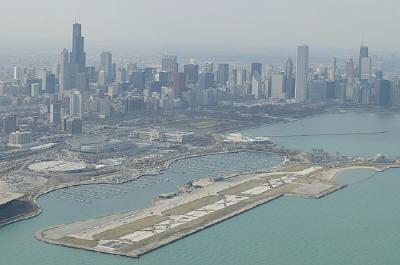 Graft, corruption and scandals are just part of the fabric of Democratic politics. Short of going to jail there is no reason why Daley shouldn't be reelected.

The only thing Daley has to do to be re-elected is not be convicted of any felonies. Chicago voters are like D.C. voters going for Marion Barry.

Chicago voters don't have to worry about showing up at the polls. Their votes get recorded and counted for Daley and the the Dims even after they've been dead for years. It's all part of the service from your friendly local alderman.

This just makes me sick. The mayor of chicago should be a statewide elected office, since the people in that city are unable to govern themselves.