A term has returned to the lexicon of political debate in recent months; a term for which, in a decent world, we should have no need. That term is “anti-Semitism”.

In January, Labour produced two posters. One depicted Michael Howard as a Shylock or Fagin caricature. The other pasted the faces of Mr Howard and Oliver Letwin on to pigs’ bodies. In February, figures showed that anti-Semitic attacks rose to record levels in 2004 — 42 per cent higher than in 2003. Add to this Ken Livingstone’s comparison of a Jewish reporter to a concentration camp guard, and the odour of anti-Semitism is clearly with us once more.

But there is a more astonishing incident which has yet to receive any coverage.

Lord Ahmed, who has been a Labour life peer since 1998, is the first Muslim to have been so honoured. His presence in the House of Lords is symbolically important. His behaviour matters, both in the message it sends to his fellow Muslims and in what it represents to the rest of us.

In May, Lord Ahmed called — at considerable personal risk — for Islamic militants such as Abu Hamza and Omar Bakri to be deported. The risk was real: a fatwa was immediately issued against him.

But his behaviour has not always been so admirable.

On February 23, Lord Ahmed hosted a book launch in the House of Lords for a man going by the name of Israel Shamir. “Israel Shamir” is, in fact, a Swedish-domiciled anti-Semite also known as Jöran Jermas.

The gist of Shamir/Jermas’s speech at the meeting can be gleaned from its title, “Jews and the Empire”. It included observations such as: “All the [political] parties are Zionist-infiltrated.” “Your newspapers belong to Zionists … Jews indeed own, control and edit a big share of mass media, this mainstay of Imperial thinking.” “In the Middle East we have just one reason for wars, terror and trouble — and that is Jewish supremacy drive . . . in Iraq, the US and its British dependency continue the same old fight for ensuring Jewish supremacy in the Middle East.” “The Jews like an Empire … This love of Empire explains the easiness Jews change their allegiance … Simple minds call it ‘treacherous behaviour’, but it is actually love of Empire per se.” “Now, there is a large and thriving Muslim community in England … they are now on the side of freedom, against the Empire, and they are not afraid of enforcers of Judaic values, Jewish or Gentile. This community is very important in order to turn the tide.”

TOPICS: Culture/Society; Editorial; Israel; United Kingdom
KEYWORDS: stephenpollard
1 posted on 04/06/2005 5:21:06 PM PDT by quidnunc
[ Post Reply | Private Reply | View Replies]
To: dennisw; Cachelot; Yehuda; Nix 2; veronica; Catspaw; knighthawk; Alouette; Optimist; weikel; ...
If you'd like to be on this middle east/political ping list, please FR mail me.
2 posted on 04/07/2005 5:49:41 AM PDT by SJackson (You simply have to accept the fact that we are all corrupt-Mahmud Abbas to senior UN official, 1996)
[ Post Reply | Private Reply | To 1 | View Replies]
To: SJackson
These are the posters. Disgusting. I used to work for Letwin, he is a good man. 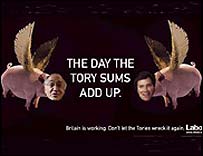 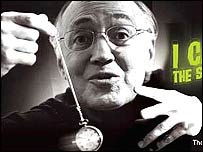