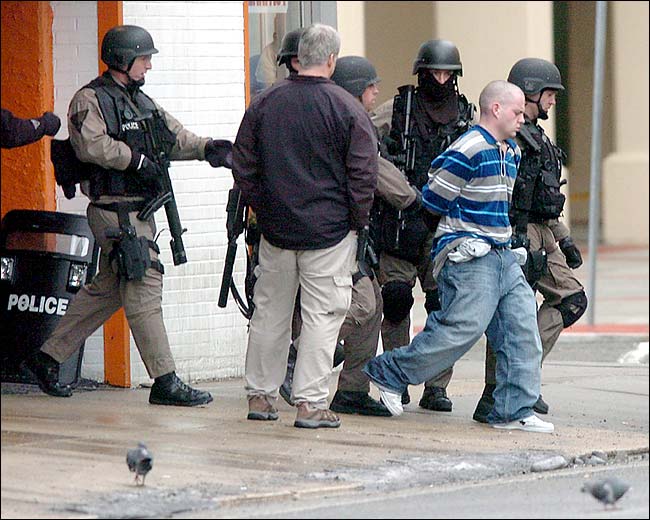 
Christopher DiMeo, 23, being taken into custody Friday in Atlantic City after being arrested without a fight. The police
described him as a heroin addict and a gambler.

A fugitive wanted in the killing of three jewelers in a string of shop robberies in New York and Connecticut was seized at a seedy motel in Atlantic City yesterday after law enforcement officials surrounded his barricaded hideout with a cordon of firepower and persuaded him it was hopeless.

The suspect, Christopher DiMeo, 23, a former convict described by the police as a heroin addict and chronic gambler on the run since jumping parole last fall, was arrested without a fight in a $39-a-night room a block off the Boardwalk and the casino strip. A woman with him was also taken into custody.

After tracking Mr. DiMeo and the woman to Room 230 at the Ascot Motel, at Pacific and Iowa Avenues, where they had checked in Thursday night, federal marshals and state and city police officers blocked off surrounding streets, posted sharpshooters on rooftops and evacuated all the other occupied rooms in the Ascot, a dingy 80-unit establishment.

The officers seized the woman, Nicole Pearce, as she strode to the front desk with cash for another night's stay. Then they left a special telephone outside Room 230 and began negotiations.

At midafternoon, Mr. DiMeo stepped out into a circle of guns and was handcuffed and led away.

He had shaved his head, and the scraggly immature beard depicted in nationally circulated "armed and extremely dangerous" wanted posters was gone.

The .40-caliber automatic thought to have been used in the killings was not found, the police said, and a black sport-utility vehicle seen in some of the robberies had been abandoned in Brooklyn, apparently in favor of a bus to Atlantic City.

But the authorities said there was no doubt that the occupant of Room 230 was the man sought for the killings of Timothy and Kimberly Ann Donnelly, the owners of a Fairfield, Conn., jewelry store who were shot repeatedly in a robbery on Wednesday; the fatal shooting of Thomas Renison, the manager of a Glen Head, N.Y., jeweler on Dec. 21; and recent jewelry robberies in Rockland and Nassau Counties.

"He was very calm," Maj. John Hunt of the New Jersey State Police said after helmeted officers in flak jackets, carrying shields and automatic rifles, hustled the suspect to a waiting sedan.

Mr. DiMeo was clad in baggy jeans, white sneakers and an oversize, striped sweatshirt, and his pockets had been turned out.

The Atlantic City police said he was being held on a parole violation in New York State, but murder and robbery charges were being drawn up by the authorities in Connecticut and New York, and warrants were expected to be issued today for a possible arraignment and extradition hearing on Monday in Superior Court in Atlantic City.

Waves of relief broke the tension among some relatives of victims of the crimes. "We are thrilled with the job all the police did - New York, Connecticut and New Jersey," said Mike Donnelly, the brother of Timothy Donnelly. 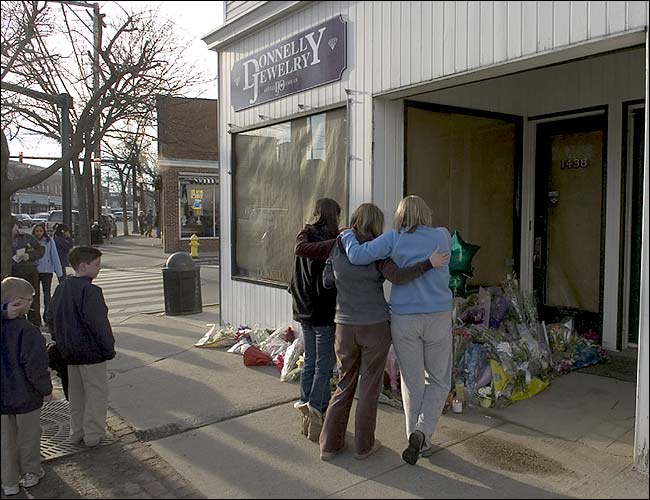 
Mourners embraced Friday outside Donnelly Jewelry in Fairfield, Conn., where the owners where killed.

The arrest ended one of the most intensive manhunts in the New York metropolitan area in recent years, one rendered all the more urgent by the brutality of the shootings - Mr. Donnelly was shot five times and his wife six times, though there were no signs of a struggle - and by reports of the suspect's unpredictable volatility.

Nothing resembling a complete biography of Mr. DiMeo was available immediately. But the outlines of a strange and seemingly haunted life began to emerge from the accounts of acquaintances and law enforcement officials. Mr. DiMeo grew up in a middle-class pocket of Glen Head, where million-dollar homes are common.

Mary Anne Sheil, of Port Washington, knew the family. She said Mr. DiMeo's mother was a troubled woman whose husband left her when the boy was young. "His mother came to my house and she said, 'I'm having problems with him,' " Ms. Sheil recalled. "He was having trouble in school." Five years ago, she said, she sold him a Chevrolet Monte Carlo that he wrecked two weeks later.

Mr. DiMeo, who the police said began using drugs as a teenager, was arrested three times in Nassau County - for robbery as a youthful offender in 1999, for second-degree burglary (purse snatching) and probation violation in April 2001, and for burglary, third-degree robbery and drug possession in August 2001. In the last case, he was convicted of robbery and sentenced to one to three years in prison.

He served two years and four months. Released last June, he moved to San Diego, where he agreed to live with his grandparents under a parole agreement, said Detective Rick Persichilli of the San Diego Sheriff's Department. Detective Persichilli said the grandparents let him use their 1999 black Honda Passport and gave him money to start a boat repair business.

But Mr. DiMeo did not report to his parole officer in October, and his grandparents reported that he had taken money from their bank account and disappeared, along with their Honda and three drawings of the Beatles valued at about $10,000. "He may have gone to Las Vegas for a while," the detective said.

In all three robberies, there were similar descriptions of the assailant - a young white man with vivid blue eyes - and witnesses remembered that he lingered for up to an hour, talking amiably about buying an engagement ring, behaving calmly before suddenly drawing the black automatic from his shopping bag, shouting threats and firing his gun while dumping trays of loot into his bag. Some witnesses also described the getaway car as a black Honda Passport.

Besides witness accounts, there were security tapes from video cameras that caught the robber, and after the killing of Mr. and Mrs. Donnelly in Connecticut on Wednesday, Nassau and Fairfield detectives conducted ballistic tests that showed that the same gun had been used to kill Mr. Renison.

The authorities declined to say precisely how they came to focus on Mr. DiMeo as a suspect, although his name was raised last month as that of a suspect in the Dec. 21 robbery and killing in Glen Head, his hometown. Some Nassau County detectives said they were angry that their department had not released his name and description at that time, saying the killings in Fairfield might have been averted.

But Sgt. Anthony Repalone, of the Nassau County police, dismissed the criticisms yesterday as "totally inaccurate." He said Mr. DiMeo was one of 16 suspects in the Glen Head case last week. But after a composite sketch of the robber was released, the police received hundreds of calls, two of which led them to believe Mr. DiMeo had committed the crimes.

Investigators found the Honda Passport in the Bushwick section of Brooklyn on Thursday night, and - aware, they said, of Mr. DiMeo's need to gamble - focused the search on casinos in Connecticut, upstate New York and Atlantic City. Carrying pictures of Mr. DiMeo and the woman with him, two federal marshals walked into the Ascot Motel, where the manager, Betty Gatewood, said the woman was in Room 230.

She was tall and blond, about 26 or 27, and had arrived, apparently alone, Thursday night, said the desk clerk, Jeffrey, who declined to give his last name. He said she showed a valid California driver's license and registered as Nicole Pearce. Jeffrey and Ms. Gatewood said they were unaware that a man was sharing the room.

In the late morning, Ms. Pearce was seized as she stepped to the desk to pay for another night. Under questioning later, she was said to be cooperating, and the police said the duration and nature of her relationship to Mr. DiMeo were not clear.

Over the next few hours, a small army of heavily armed law enforcement officials surrounded the motel, positioning sharpshooters on the roof of a four-story building across the street and blocking off traffic on Pacific and Iowa Avenues. Phone calls and soft knocks on doors helped to evacuate the other occupants of the motel, a two-story, white stucco place that predates the casino era.

Major Hunt, of the State Police, said that the first officers who approached Room 230 tried to talk to Mr. DiMeo through the door. He barricaded himself in. The officers then left a special telephone, made for hostage negotiations, outside the door and pledged to let him take it in without trying to harm him. He did so, and they began talking about 2 p.m.

About an hour later, he gave up without a struggle, convinced there was no way out.

Robert F. Worth, Iver Peterson and Avi Salzman contributed reporting for this article.

TOPICS: Crime/Corruption; Culture/Society; News/Current Events; US: Connecticut; US: New Jersey; US: New York
KEYWORDS: drugs; murder; police; robbery
Good basic police work gets the bad guy. He will never walk the streets again and should get the death penalty in CT.
1 posted on 02/05/2005 3:30:01 AM PST by Pharmboy
[ Post Reply | Private Reply | View Replies]
To: Pharmboy

Why did I believe "gambling and drugs" were major issues instantly as soon as I saw the headline? Perhaps there are several well-known buyers of stolen jewelers operating in or near Atlantic City ? What? The FBI didn't know who they were and didn't stake them out. And the ones with the jewels got away ! I am amazed and mortified! Oh, well . . . whatever.

Sadly, these things happen all too frequently. The elder owner of my local pet store was shot and killed a couple of years ago.

What a dumbass. Pulls off 3 robberies and then goes to Atlantic City. "Gee, who would think they'd find me here." It's kind of like, let's hold up some folks on W. 44th in NYC and then we'll hide out in Sardi's for a week to make sure no one finds us. Right. Bad analogy but you get the point.

This POS seemed to enjoy the whole thing that he did--charming the store owners for an hour and then shooting them down. Too bad the cops couldn't have saved the states money and gunned him down...but he did not resist.

Yeah...he won't be making the egg salad sandwiches for the MENSA picnic.