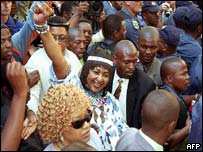 Winnie Mandela is still hugely popular The former wife of ex-president Nelson Mandela has won an appeal against a five-year custodial jail sentence. Winnie Madikizela-Mandela had been convicted in April 2003 of theft and fraud in connection with bank loans she obtained for ANC workers.

But a South African judge overturned her theft conviction and cut and then suspended in full her jail sentence.

An icon of the anti-apartheid movement, the former president of the African National Congress Women's League (ANCWL) was convicted on 43 charges of fraud and 25 of theft.

She resigned her seat in parliament following the conviction.

Ms Madikizela-Mandela's lawyer had argued in court last month that she was only trying to help the ANCWL employees when she obtained fraudulent bank loans for them.

The judge said that Ms Madikizela-Mandela, 67, had had "a long and often difficult role in public life" and that "during her lifetime, she supported a greater cause than her own".

She was reported to have shown little reaction to her appeal victory but said she would seek to have her conviction overturned.

"I have given instructions to my lawyers to appeal the judgment - a judgment that is completely wrong," she said.

Scores of students cheered the judge's decision not to send her to prison.

She remains hugely popular with mostly poor black South Africans, who remember her role in the struggle against white minority rule.

In 1991, she was sentenced to six years in prison for her role in the killing of a 14-year-old boy.

This was reduced to a fine on appeal.

How much was the judge paid?