A Haitian Village Gets a Barrage of Care [Our incredible country/military]
NY Times ^ | May 31, 2004 | TIM WEINER 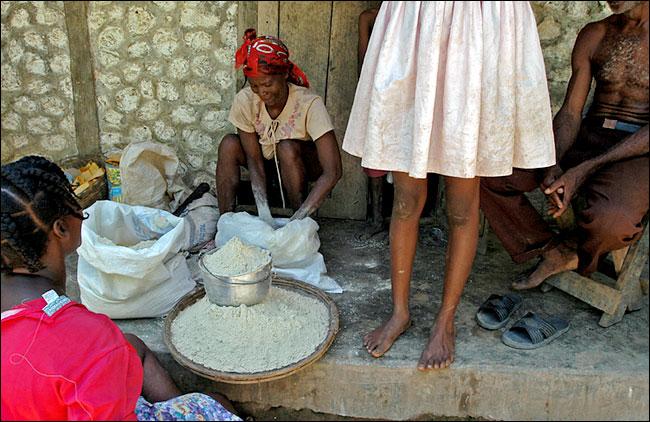 
With food scarce, this family hopes that their food will last and that desperately needed aid will continue to arrive.

MAPOU, Haiti, May 30 — The awful truth is that life in this ruined patch of Haiti may be better now than it has ever been, or will ever be again.

Doctors and nurses treated the sick and wounded on Sunday in a shack that passed for a clinic. Hulking American helicopters delivered tons of food. People with money and power — aid workers and American soldiers — attended to Mapou.

For the first time, and perhaps the last, someone strong is looking after the people of Mapou and its outlying hamlets. The people here lost as many as 1,670 of their friends, neighbors and relatives in the floods that have destroyed swaths of Haiti and the Dominican Republic, according to one Red Cross official in Mapou on Sunday, Erich Baumann. 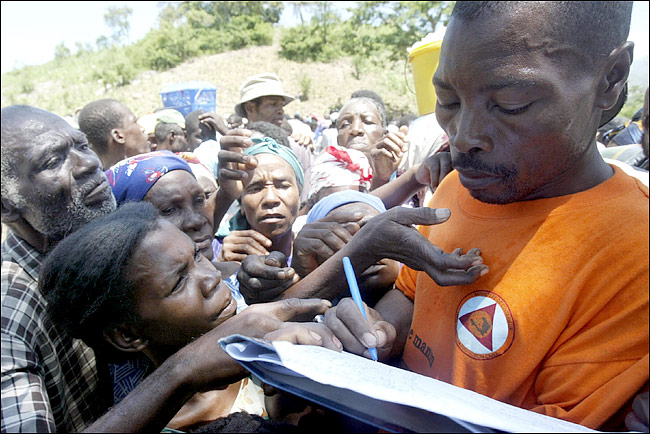 
Flood survivors crowded around a Haitian government official as aid workers and soldiers brought food and medicine to
Mapou on Sunday.

The 1,900 American soldiers in Haiti — and their helicopters, now Mapou's lifeline — will start leaving the country on Tuesday. They will all be gone in a month.

About 1,500 of them are marines based at Camp Lejeune, N.C. More than 1,000 of them were scheduled to go to Iraq in August. Some may take a bit more time to rest, retool and retrain, but almost all will head to Baghdad and beyond by year's end.

The Haitian government has about $3 per person to help the estimated 75,000 people affected by the flood. With so little money to aid Mapou's survivors, the government may force them to move. Many of the survivors say they might as well leave forever. 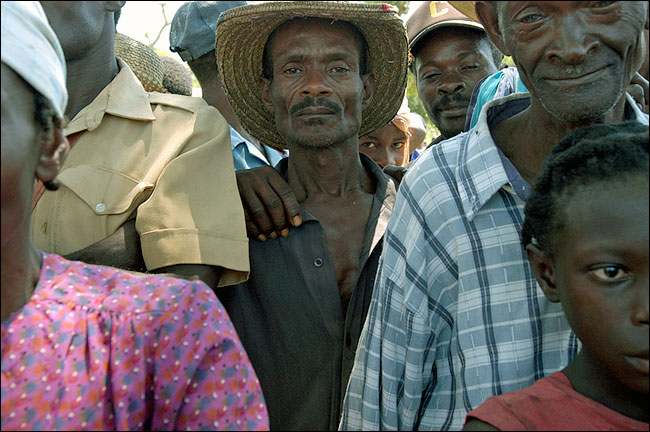 
People waited in a food line in Mapou, Haiti.

"This land is cursed," said Lilie Jean-Baptiste, 26, who like most of her neighbors had willed a living out of the earth, growing a little cassava, buying rice and beans when she scraped a dollar or two together. "Mapou is over."

Marcberth St.-Louis, 21, is the son of dirt farmers who dreamed of a better life abroad someday. Mr. St.-Louis, who speaks fluent French, Creole, Spanish and a little English, said: "For many people here, life is finished. People loved their little piece of land but it's all gone now."

Raymond Delaba, 15, a survivor of the torrent that took Mapou and now the sole support for his six younger brothers and sisters, said: "It's just impossible to survive here, with or without the flood. My parents are gone. My house is gone. Our pigs and goats are gone. How am I going to survive? Are we going to eat a handful of rice out of a bag from abroad for the rest of our lives?"

This is what life was like before the flood in Mapou and its six surrounding hamlets — one of which, Barrois, was completely destroyed:

As in most of Haiti's villages, the average income here is a dollar a day or less. Last year, a drought shriveled the corn. For Christmas, fate gave Mapou a flash flood. During and after the February revolt that overthrew President Jean-Bertrand Aristide, Haiti's first democratically elected leader, the price of rice — the staff of life for Haitians — rose 50 percent in Mapou. That meant 50 percent less to eat, Mapou's survivors said.

The New York Times
The floods may have killed as
many as 1,670 people in Mapou.

No leader of Haiti has ever visited Mapou, the people said. "For the poor, there is no government," Ms. Jean-Baptiste said. "The only government of Haiti is God."

Now, starting June 1, a coalition of foreign soldiers cobbled together by the United Nations will begin to replace the American-led force that occupied Haiti after the fall of Mr. Aristide, who flew to exile in South Africa on Sunday.

It is unclear that this force will have the organization, money or equipment to deal with the emergencies of food, medicine and shelter facing survivors of the flood, who will need help for months to come.

The force is supposed to include soldiers from Brazil, China, France, Argentina, Nepal, Bangladesh, Uruguay and the Philippines. But it remains largely a force on paper, though a ceremony beginning the transfer is to take place on Tuesday and the new United Nations force is set to assume command on June 20.

The question is what happens to the people of Mapou when the world's fleeting attention — and the American soldiers — move on.

The same might be asked of the people of nearby Fond Verrettes, where the dead and missing now number close to 200, and Jimaní, just over the border in the Dominican Republic, where more than 700 are dead or missing. No one has counted the dead in two small floodstruck Haitian towns, Nan Galet and Boulou, but unofficially the toll in both nations is now well over 2,000.

The United Nations is already running more than a few major operations in places like Liberia, where thousands of peacekeepers patrol a devastated country. The world's aid agencies are struggling to handle a world of crises, many man-made, in places like Afghanistan. The charitable responses of the world's governments to Haiti have been far less than the United Nations sought.

So the withdrawal of American forces will not help Haiti cope with its latest disaster.

The American military began arriving Feb. 29, the day President Aristide fell, as the capital, Port-au-Prince, was stormed by armed rebels calling for a return of the notorious Haitian Army he had disbanded.

The Americans were seen by many Haitians as an occupying force; the United States Marines invaded and essentially ruled Haiti from 1915 to 1934. The return of American forces was welcomed by the armed rebels. But they were hated and feared by armed Aristide loyalists, who saw them as part of the political equation that ended Mr. Aristide's presidency.

In the last three months, the American military role in Haiti has shifted from taking — and returning — hostile fire, to building a firewall between pro- and anti-Aristide gunmen, to providing a measure of comfort.

Troops have delivered 153 tons of food, 30,000 gallons of water, and 13 tons of supplies like tarpaulins and cooking tools to flood victims in the past five days. Before the flood, American, French, Canadian and Chilean soldiers here distributed food and medicine, cleaned up tons of garbage, refurbished schools and repaired orphanages.

United States marines are trained to fight a "three-block war," an idea conceived by Gen. Charles Krulak, Marine Corps commandant from 1995 to 1999.

"You're handing out humanitarian assistance to people, you're peacekeepers intervening between forces, you're getting shot in combat," is the way Lt. Col. Dave Lapan of the Marines, the spokesman for the American military in Haiti, explains the three-block doctrine. "Our forces would be able to do all three because, increasingly, that is the world we are going to be living in.

"Haiti has been exactly that," Colonel Lapan said.

"When we were first here, we were getting shot at," he said. "We shot back. That calmed things down. Then you get into a neighborhood and help people. That helps protect you. You get information. You get a feeling from the populace that you're not here as an `occupying force.' Giving people water, rebuilding schools — that contributes to the mission."

Haiti, he said, has "given our marines an experience that will help them later on" — in the months to come, when they arrive in Iraq.

Surprising indeed. But God bless our military as they help in Haiti and God bless Haiti.

2 posted on 05/31/2004 5:17:44 AM PDT by buffyt (Kerry is a Flop Flipper, he Flips Flop, all the Flop that he Flips, is well Flipped Flop!)
[ Post Reply | Private Reply | To 1 | View Replies]
To: Pharmboy
Surprising that the Times would publish such nice things about our military.

True, but tomorrow it will be back to more pictures of Abu Ghraib.