Money illicitly siphoned from the UN oil-for-food programme by Saddam Hussein was used to finance anti-sanctions campaigns run by British politicians, according to documents that have surfaced in Baghdad. Undercover cash from oil deals went to three businessmen who in turn supported pressure groups involving the ex-Labour MP George Galloway, Labour MP Tam Dalyell, and the former Irish premier Albert Reynolds, it is alleged in documents compiled by the oil ministry, which is now under the control of the US occupation regime.

Separately, a dossier from the oil ministry in Baghdad has been handed by the British Foreign Office to Customs and Excise, which has been asked to investigate. They were also referred to the Cabinet Office because of their political sensitivity.

"The government has been given copies of certain documents [from Iraq]," a Foreign Office spokeswoman said yesterday. "They are being passed to the appropriate authorities for consideration."

Two of the three businessmen involved in UK campaigns, Burhan al-Chalabi and Riad al-Tajir, were based in Surrey; the other, Fawwaz Zureikat, a Jordanian entrepreneur, had offices in London.

Mr Chalabi and Mr Zureikat gave money to the Mariam Appeal, run by Mr Galloway, the MP confirmed. Mr Tahir said he ran another anti-sanctions campaign called Friendship Across Borders, which had Mr Dalyell as its official patron and organised visits to Baghdad by supportive politicians.

The three businessmen are alleged to have received money from Saddam via oil allocations. They sold the oil rights on at a profit of more than $1m (about £530,000), in an exploitation by Saddam of loopholes in the UN's then oil-for-food programme.

Mr Tahir agrees he profited from the oil deals. Mr Chalabi refuses to comment. Mr Zureikat confirmed to Agence France Presse in Jordan last week that he had made the oil deals.

The oil-for-food programme was set up in 1995 amid fears of a humanitarian disaster after the first Gulf war. Under the scheme, Saddam was allowed to sell limited quantities of oil to pay for food and medicine for the Iraqi people.

The contents of the new documents shed light on Mr Galloway's libel battle with the Daily Telegraph. Last year newspaper reports based on purported Iraqi intelligence files led to him being accused of receiving an annual £375,000 in secret personal payments from Saddam.

Our investigations in Iraq, New York, Paris, Moscow and London indicate the new British-related documents are authentic, although their meaning is not always clear.

These files do not implicate Mr Galloway in personal corruption. Nor do they suggest that Mr Dalyell and Mr Reynolds, who always paid their own way, had any knowledge of what was going on.

Mr Galloway said he was unaware that his financial sponsors were getting oil cash from the UN programme. But he accepts that he knew his supporters had links with Saddam's regime, and regarded that as an inevitable price to pay.

Despite their importance in the bitter Galloway controversy, the contract documents seem unlikely to surface in the pending libel trial.

The so-called oil list has already caused worldwide embarrassment, with allegations made against prominent people and companies in France, Russia, Switzerland and South Africa, as well as employees at the UN.

Across the world, some of those named agree the lists seem authentic. Others deny it, or say details are exaggerated.

bye bye Mr.Galloway... I hope the british find a nice gulag for ya

BTW, what the hell is an MP?

I wonder how he's going to do that?

Which is why character does count.

"Results of Saddam’s oil bribe probe to be made public"
BAGHDAD: Iraqi Oil Minister Ibrahim Bahr al-Ulum said on Monday he would soon make public the results of his investigation into the alleged oil bribes handed out to foreign political figures by former leader Saddam Hussein.

"I will soon present a detailed report including all the elements I have gathered so that everybody knows the truth in this affair," the minister told AFP.

Is this the same Mr Chalabi that is among candidates for leading Iraq's future government? 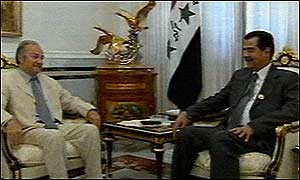 The pic's from this link with a story on Galloway's trip to Iraq.

Doesn't always help to have low friends in high places, though, does it?