Professional fraudsters once fleeced gullible foreigners of thousands of pounds with ease. Now they are struggling to make money from their old tricks. Philip Sherwell in Lagos reports.

With his gold rings, flashy watch and easy line in patter, Udo Akpan is every inch the professional conman. He slouches in his chair in a noisy bar in Lagos and reminisces about his 11-year career as a fraudster.

It has been a good life, he says, one that has allowed him to support his wife and two children and treat himself regularly to a new Mercedes or BMW.

Nothing lasts for ever, however, and Akpan, who is originally from southern Nigeria, is thinking of going straight. Not after a sudden twinge of moral rectitude, he explains, nor because of the government's clampdown on fraudsters but because his crimes no longer pay like they once did.

Akpan, whose name has been changed, is known in local parlance as a 419-er, the nickname stemming from an article in Nigeria's criminal code outlawing junk-mail frauds which promise a share of non-existent fortunes once an advance fee has been paid.

The e-mail appeals, typically written in capital letters, are notorious. "Dear Sir, I am Marian Abacha, widow to the former military head of state, late Gen Sani Abacha, who died suddenly as a result of cardiac arrest. I currently have £12.5 million which I wish to transfer out of Nigeria with your help. I will pay you 10 per cent commission for the kind use of your bank account . . ."

The scam e-mail works because the sender claims to have access to millions of pounds but cannot get it out of the country. In return for providing details of a bank account so that the money can be smuggled out - and paying a fee that will be used for essential bribes - the victim is promised a large cut of the cash.

Akpan claims to have made thousands of pounds from such cons while the National Criminal Intelligence Service in the UK says that 150 Britons were defrauded of £8.4 million last year - an average loss of £56,675.

Nigerians have become so skilled at these con-tricks that the 419 industry is estimated to be the country's biggest foreign currency earner after oil, gas and cocoa.

In the biggest single 419 con, a Brazilian bank was cheated out of £113 million. Police say that official figures underestimate the problem as many victims are too embarrassed to admit that they have been conned.

The 419 fraud has become so notorious, however, that Akpan's bogus appeals are falling on stony ground. "I've barely made a dime in the last two years," the university-educated 38-year-old laments. "There's too much publicity about 419 these days. People are catching on."

In their last successful "hit" a few months ago, Akpan and three other members of his crime syndicate persuaded a Japanese businessman to pay £6,875 in "advance fees" on a phantom contract to export electrical goods to Nigeria - a far cry from the days when victims regularly paid six-figure sums.

The syndicate's most lucrative swindle netted £156,000 from another Japanese entrepreneur who believed that he would eventually share in a £34 million payout after allowing his bank account to be used to move funds.

Akpan has no idea exactly how much money he has made from his 419 career but wishes now that he had not spent it all "on cars and girls". He has little sympathy for most of his victims, regarding them as "greedy fools" who were happy to collude in his schemes when they thought there was easy money to be made.

"They wanted to reap where they had not sown," he said. "When we told them that we wanted to deposit millions of pounds of ill-gotten money from our country in their bank accounts, they did not complain. So why are they different from any of us?"

He also attempts to mount a political defence of his business, claiming that as Africa had been exploited for centuries by the white man, he was pursuing a system of reparations. At the same time, he recognises that some victims were duped into believing that they were investing in legitimate business deals.

"They are the ones I feel sorry for," he said. "They were just naive and foolish. I always remember a Guatemalan hairdresser who cried down the phone when he realised what had happened. He had borrowed the money and now he had lost everything."

Our late-night meeting had been arranged through intermediaries. Thanks to unwelcome publicity, the 419-ers are feeling vulnerable. Akpan agreed to speak only after he was sure that he was not meeting a CIA agent or undercover British policeman.

Until this year, when the civilian government of President Olusegun Obasanjo launched a clampdown on the 419-ers, Nigeria's fraudsters did little to conceal their wealth, which they lavished on cars, jewels and opulent mansions in tightly guarded compounds in Lagos.

The fraudsters, many of whom live in a nouveau-riche district with a main road nicknamed Cocaine Avenue, thrived during successive military dictatorships. Politicians and judges were as corrupt as the fraudsters and Nigerians also perfected the art of conning each other.

A favourite trick is still to claim to own a house and to sell it to an unsuspecting buyer when the real owner is away. As a result, signs hang above the doorway of many buildings saying: "This house is not for sale. Beware 419 fraud."

In May, however, the president established a new anti-fraud unit, the Economic and Financial Crimes Commission (EFCC). This month he created another panel to crack down on internet-based crimes. The EFCC has reported some early breakthroughs, seizing more than £125 million from advance fee fraud suspects and arresting some of the most prominent alleged fraudsters.

Like many 419-ers, Akpan is well educated. In their bogus e-mail appeals, however, fraudsters often insert mistakes, hoping to fool their targets into thinking that they are "dumb Africans".

"The reality is quite the opposite," said Charles Tive, a former Nigerian detective and author of a book on the subject. "The 419-ers are usually very well versed in international business practice and often know a lot more than their victims."

Akpan became a fraudster after failing to find regular work. Aged 27, he bumped into an old schoolfriend living the high life in Lagos. "I wondered how he could afford to buy new cars and new clothes and go out to restaurants and bars all the time," said Akpan. "Then he explained he was a 419-er and asked if I wanted to join his group. That's how I got started."

Akpan claims to have fleeced very few Britons. "They are too conservative and sensible," he said. "Even if they answer the first letter, they normally ask too many questions and drop out."

Other fraudsters had greater success in finding a way through the British reserve. Now even they are struggling. 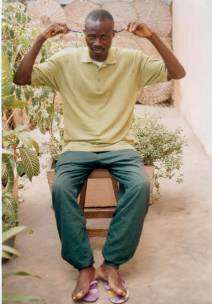 I get that e- mail from 30 different addresses. I could never block it out completely. -Tom

I get that e- mail from 30 different addresses. I could never block it out completely. -Tom