The French and British Are Rescuing Their Citizens in Kabul, but Here's What Americans Were Hearing
Red State ^ | 08/19/2021 | Nick Arama

Americans were left in the lurch by Joe Biden, stuck behind enemy lines in Afghanistan, despite the fact that the Biden team was warned about the impending collapse of Afghanistan and Kabul.

They were then told that if they were outside of Kabul, there was no plan to get them out.

Even the people in Kabul were told: Figure out your own way to the airport through the Taliban because we’re not going to help get you there.

Now, just in perspective, understand that the French and the British are actually going out and extracting their citizens in Kabul and bringing them back. The French. But the Biden folks aren’t letting the military do that because of the “deal” with the Taliban about “safe passage” to the airport, according to reports. Meanwhile, many can’t get through despite that claim of “safe passage.” It’s madness. Biden is acceding to the Taliban, yet again.

US officials say the most powerful nation on earth lacks capacity to extend operations into Kabul to collect stranded citizens & people we have a duty to protect. But the UK & French governments are reportedly doing exactly that. But we can’t? We can. We are choosing not to. Why?

Over the past 48 hours, the elite tactical unit of the French Police, RAID, have made multiple trips into Kabul to rescue people sheltering in the French Embassy.

So far, they have taken 216 French and Foreign nationals to the secure area of Kabul Airport, #Afghanistan. pic.twitter.com/dklVoBOxiG

Our military is the best in the world. Not so much the alleged Commander-in-Chief, and that’s the problem right there.

Even if you managed to make it through the Taliban and into the airport, you weren’t quite done with the roadblocks yet, courtesy of Air Biden.

Turns out even though Joe Biden’s actions had put you in peril, you were still going to be required to pay an inordinate amount to fly out of Kabul. The State Department issued an alert to citizens which included the warning that they could have to pay up to $2,000 or more for a flight and/or sign a promissory note to pay that amount. Non-citizens would have to pay even more.

🚨🚨: Are American citizens actually being forced to pay for their own evacuation out of #Afghanistan? pic.twitter.com/S73W3dbRPB

But now, after that got a ton of backlash, State Department spokesman Ned Price said, “In these unique circumstances, we have no intention of seeking any reimbursement from those fleeing Afghanistan.”

Imagine, illegal aliens apparently get flights across the U.S., but Americans trapped because of the failed actions of Joe Biden would have had to pay for their own rescue. Assuming they can even make it to the airport. Somehow, this administration just keeps reaching for the depths and meeting them.

State Dept's Overseas Security Advisory Council said Aug. 14: "Repatriation flights are not free, & passengers will be required to sign a promissory loan agreement & may not be eligible to renew their U.S. passports til the loan is repaid. Cost may be $2,000 or more per person." See here: 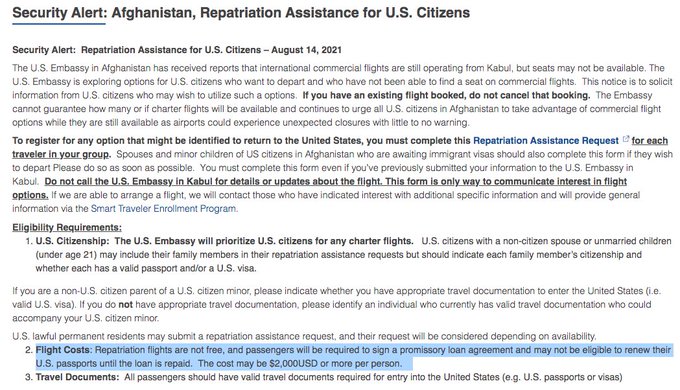 Those that made this happen don’t GAS about the idiot, Joseph Stolen.

Even worse Biden is taking credit for people rescued by the British, German and French extractions. Watch how they parse how many people have been flown out.

And how much are the ragheads paying? How much money do they have for their support?

The Puddin Pop Puppet - soiling his adult diaper, and the Merkun Media pretends it ain’t happening...

The simplest answer is whomever is handling the Kabul file doesn’t want to rescue them.

I’m guessing that Biden’s admin doesn’t want survivors to play a role in 2022.

biden just pulls out of afghanistan, blind-siding everyone and leaving everyone stunned, and scrambling to get their people out- They are probably thinking “How i n the world is this man the president of the most powerful nation on earth?” (Little do they know, (or maybe they do) that he isn’t a legitimate president-)

the best military and the worst CIC

lions led by a donkey

The intelligence community must have realized the Americans left there are Right wing extremists and don’t want their type state side.

one dead American and it is game over.

Maybe they are Cubans

If we have a dead American you wanna bet we don’t hear about it!!!

Does America still have an embassy I thought Joe closed it!! The French are going to their embassy we no longer have one!!!

While we are flying out non-citizens for free Americans are being charged (I heard 2K each) and they have to make it to the airport on their own too. In addition to knowing how to blame their failures on others the left spend a great deal of time relaxing. I saw an article over at Breitbart about that, ‘Joe Going Back on Vacation!’, which you can find there, so give that a look. Dude left vacation to say a few words so he could go back on vacation...while Americans cowered in fear in Afghanistan. Americans are so sorry you had to give up a few hours to come give a speech and go right back to rest Joe.

To the alt-far-left-communist-democrats Americans are second class citizens and illegal aliens (including ‘refugees’) are the bee’s knees.

Biden thinks he is President of the United Kingdom, or as he calls it ‘Airstrip One’.

Dementia Joe will then issue a strongly worded letter to the Taliban fer sure.