Speaker Nancy Pelosi said Thursday she’s still hoping to clinch a massive coronavirus relief deal with the White House before the end of the year, despite predicting a sweeping Joe Biden victory next week that could deliver Democrats control of Washington in January.

“I feel very confident that Joe Biden will be elected president on Tuesday,” Pelosi told reporters at her last weekly press conference before the Nov. 3 election. “We want to have as clean a slate as possible going into January.”

Democrats have been unsuccessfully pushing a trillion-dollar-plus stimulus package for months. And while Pelosi has insisted she is getting closer to a deal with Treasury Secretary Steven Mnuchin, some of her own lawmakers are skeptical that President Donald Trump or the current GOP-controlled Senate would agree to a giant stimulus package in the wake of potentially big Election Day losses.

But others have argued that Republicans might be more eager for a deal in the lame duck session if they’re losing the White House and possibly their Senate majority come January. Some Democrats have privately said in that case it would make more sense to wait until the new year, when Republicans have less negotiating power.

Trump signaled his desire to sign a stimulus deal in the lame duck during a podcast interview that aired Thursday. But the president also predicted Republicans would win the House, making the path to a deal easier for him - something election forecasters and most in Washington don’t think is remotely likely.

The deal is dead, Jim. The election infection will end next Tuesday and states will open up and people will go back to work.

Right now the states are shut down to hurt President Trump. They need the tax revenue so they will open up next Wednesday.

She isn’t concerned with the poor suffering Americans. She is concerned about her pork in the bill

She won't do any other deal with Trump, and will wait until after the election, in the hopes that Biden wins, and then Biden will get the credit for the deal. Furthermore, any deal with Biden included, will include funding to bail out the blue states with heavy debt, thus wiping out their debts and funding the left-wing ideas, including more money for Obamacare. It's a major reset for all the blue states, while the federal government picks up the tab.

No deal before the election because it would help Trump.

BUT - a deal before January, because that’s the only shot she has of getting things into the deal that SHE wants. If she really things Biden is going to win, then she’d wait until after the inauguration, as she’d be able to get even more.

I think this really her tacit admission that Trump is going to win, and that Democrat control of the house, and her own leadership position, are in jeopardy.

If Trump loses I doubt he gives them anything they want in remaining months he is President.

That’s right. She doesn’t want any checks with trumps name on any relief checks.

Up yours Piglousy.... you’ve had weeks to get this right yet once again show US all your EPIC FAIL. 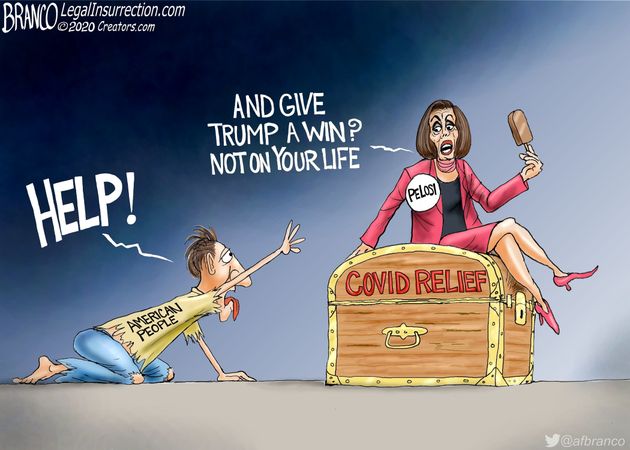 No more spending. Hoping Nancy fills it with enough poison to make it dead.

Is there any grpinds for Trump to go over Congress on this?