A sharp escalation in tit-for-tat retributions between China and the United States marks a deeply uncertain moment in relations between the two countries, already under strain from a longstanding trade dispute and a fierce debate over international use of Chinese technology.

Both countries have scrambled over the last week to shape the international narrative surrounding both the inception and response to the COVID-19 virus.

Trump began resolutely referring to the disease as the “Chinese virus,” brushing aside concerns about whether the phrase is racist and will incite unnecessary anger inside China. Trump, Secretary of Defense Mark Esper and Secretary of State Mike Pompeo have all blamed China for the pandemic, and have called for more details on the origins of the virus.

“If the Chinese government had been more transparent early on, we’re talking late fall, December at least…all the nations of the world would have been able to get our arms around this and contain it in China where it began and prevent its propagation around the world,” Esper said Friday morning on Fox & Friends. The two countries’ relationship — already under enormous pressure in recent years — is on the verge of imploding as both sides seek to assign blame for the virus’ origin and exchange tit-for-tat recriminations on other fronts, including expelling journalists.

And it seems that China wants to take this to another level.

China’s leaders have been told to prepare for a war with America amid the fallout from the coronavirus crisis, according to a Ministry of State Security report obtained by Reuters.

Chinese intelligence presented the report to top Communist Party officials last month, warning them about the fallout from China’s handling of the Coronavirus pandemic.

Leaders were warned the backlash could lead to an armed confrontation with the United States.

The report was presented early last month by the Ministry of State Security to top Beijing leaders including President Xi Jinping.

“The report, presented early last month by the Ministry of State Security to top Beijing leaders including President Xi Jinping, concluded that global anti-China sentiment is at its highest since the 1989 Tiananmen Square crackdown, the sources said,” Reuters reported.

“As a result, Beijing faces a wave of anti-China sentiment led by the United States in the aftermath of the pandemic and needs to be prepared in a worst-case scenario for armed confrontation between the two global powers, according to people familiar with the report’s content, who declined to be identified given the sensitivity of the matter.”

Reuters couldn’t determine to what extent the stark assessment described in the paper reflects positions held by China’s state leaders, and to what extent, if at all, it would influence policy. But the presentation of the report shows how seriously Beijing takes the threat of a building backlash that could threaten what China sees as its strategic investments overseas and its view of its security standing.

Please share this article wherever you can. It is the only way we can work around their censorship and ensure people receive news about issues that the mainstream media suppress.

TOPICS: Conspiracy; Government; Military/Veterans; Politics
KEYWORDS: blogspam; china; chinesevirus; clickbait; coronavirus; kungflu; markesper; mikepompeo; usa; worldwar; xijinping Navigation: use the links below to view more comments.
first 1-20, 21-40, 41-43 next last
China’s leaders have been told to prepare for a war with America amid the fallout from the coronavirus crisis, according to a Ministry of State Security report. Well, war is not something we look forward to but if we need to we are prepared we are the United States Of America!!!
1 posted on 05/06/2020 8:14:52 AM PDT by USA Conservative
[ Post Reply | Private Reply | View Replies]
To: USA Conservative

Meanwhile the rats are falling all over themselves to defend the f’n ChiComs who did this to us.

Dummies. War how? Do they have any idea how many nuclear subs we have parked off their shores? I don’t either.

Both sides seek to assign blame, but only one can be blamed for the Chinese virus

We are NOT prepared. We have lost our manufacturing ability. While we could out compete them early, we are not able to fight a sustained conflict without manufacturing. Further, we as a people have an entire political group that sides with the Communists, and would undermine any type of response. We call them Democrats....but Communist enablers is essentially the truth at this point.

Instead of war, we should be moving manufacturing BACK to the United States. This is both safer, more environmentally friendly for the world, and better for both populations. Further, we need to re-establish rule of law in the United States (prosecution of treasonous and seditious members of our government). Strict voting laws, without voter fraud, is also essential to maintain our nation as we know it. These three events would put us in a position to succeed, and avoid bloodshed with China, IMHO.

“Be polite, be professional, but have a plan to kill everybody you meet.”

3rd or 4th posing - original was purported to come from the Epoch Times, but is not on their servers. Fake news

8 posted on 05/06/2020 8:24:05 AM PDT by PIF (They came for me and mine ... now its your turn)
[ Post Reply | Private Reply | To 1 | View Replies]
To: Pete Dovgan
Further, we as a people have an entire political group that sides with the Communists, and would undermine any type of response. We call them Democrats....but Communist enablers is essentially the truth at this point.

It would be a simultaneous war with the ChiComs and Blue States ...

Agreed,
You’re in Charge.
Thanks

This is the only time I’ve ever seen Trump restrain himself. He knows he didn’t have enough time to prepare us for this eventuality. I’m sure he is doing his best with workarounds the critical supply chains the Chicoms still control. With two more years, Trump could have just rattled his economic sword to cow the Chinese, not yet.

“It would be a simultaneous war with the ChiComs and Blue States ... “

The US could not go to war with anybody without the Blue states.

Sounds like China is feeling the money crunch more mistakes to ensue.

China is the second-largest foreign creditor of the United States, after Japan. The two countries remain in dispute over territorial issues in the South China Sea... Chinese intelligence presented the report to top Communist Party officials last month, warning them about the fallout from China’s handling of the Coronavirus pandemic. Leaders were warned the backlash could lead to an armed confrontation with the United States.

In the USSR, schools used to indoctrinate the kids into thinking that there would eventually be a war, bigger than WWII, and that the Warsaw Pact would win and control the Earth. The imbecile Khruschev beat his shoe on the podium at the UN and shouted "we will bury you!" (literally, we will attend your funeral). So, how did that work out? I mean, other than the pro-Soviet-era trolls?

This appears to be a contingency scenario, pretty serious, but also pretty routine. As with the leftist coronavirus demagogues, the Chicoms prefer the spectre of blood in the streets, rather than the real thing, realizing that a shooting war with the US would result in their complete annihilation in about twenty effin' minutes.

China's Xi Jinping writes Bill Gates, thanks him for his foundation's 'generosity' in the fight against coronavirus 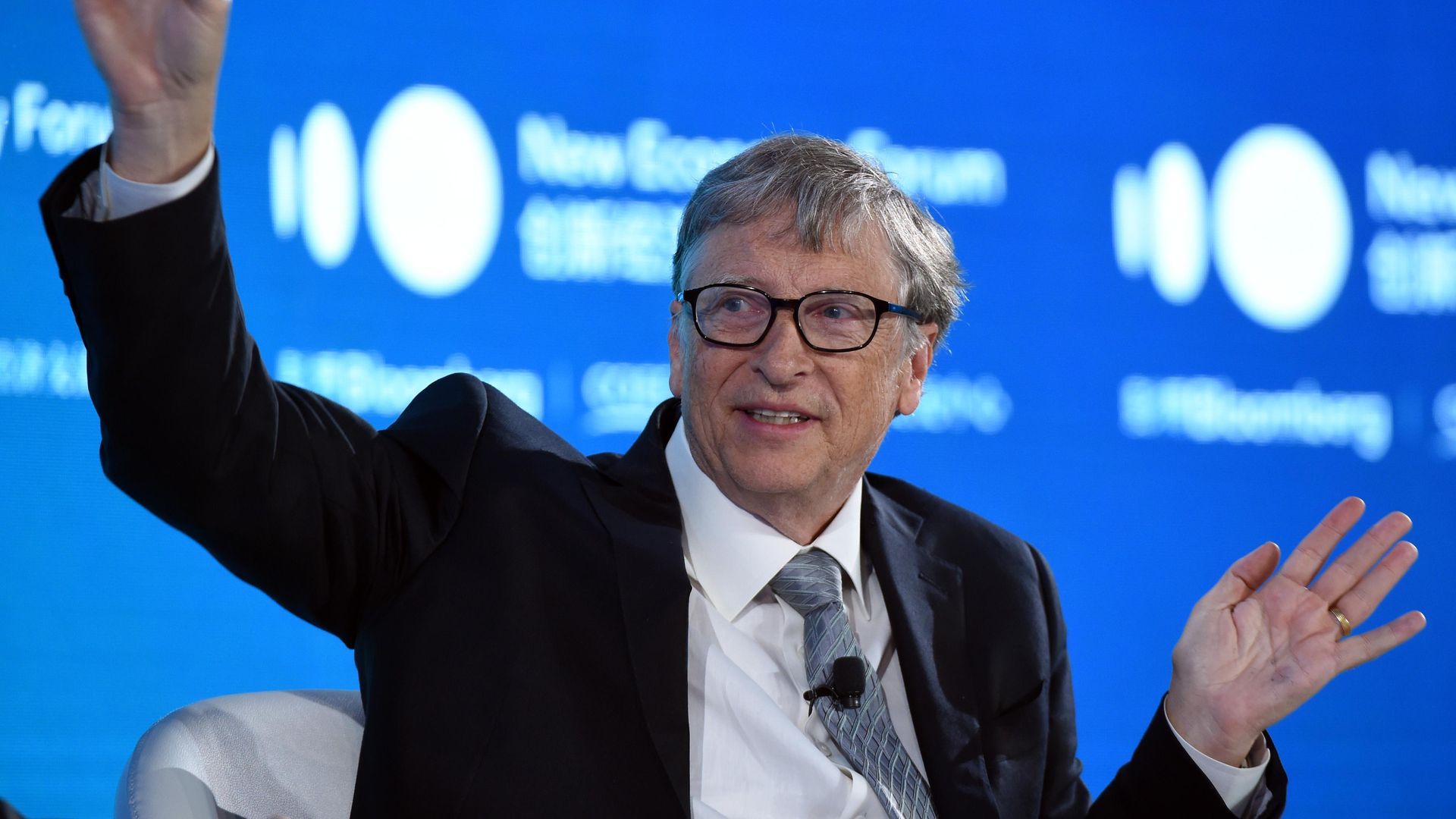 US at war with China? I wonder which side the Clintons will be on....cackle.

snip .....Remember this all happened about 25 years ago.... then Pres Bill Clinton and his foreign policy team were busily arming Beijing,
which in turn armed “rogue nations” such as Iran, Iraq, Syria and Libya.

......on the one hand, it did make sense to sell a very limited amount of advanced military technology to the Communist Chinese, for example devices for nuclear safety, or for certain military systems with important civilian applications, such as satellite launchers.

But the Clinton Administration was not doing that.

Instead, it was executing a deliberate policy—apparently one that had full approval from the top levels of the Clinton Administration, despite the vigorous opposition from government agencies, and from individual officials infuriated at the flow of top technology to China.

This often took the form of Clinton okaying the selling off some of our finest factories to China, at pennies on the dollar, and included our finest supercomputers and the key element to modern jet engines, which had been blocked for export to the Soviet bloc... (Excerpt) Read more at frontpagemag.com …

Our own bureaucrats and politicians are doing a pretty good job of that.

Agreed, but we wouldn’t have to fight the entire nation of China, only their wretched Communist regime. A large segment of their population would likely be on our side so long as we didn’t attack the general population. Regardless of what China does, one fact is inescapable: That regime must now go. They are a threat to the entire world.

Also, China’s military is not nearly as strong as they pretend to be. Their development is on a worrying trajectory, but they’re not even close to being on par with ours yet. Also keep in mind that in a conflict they would likely be facing not only us but Japan, maybe South Korea (hard to tell at times with their socialist tendencies), Australia, and perhaps India. Who knows what feckless Europe would do, but we would almost certainly have at least Britain with us

I don’t see much of anyone likely to join the Chinese side (unless you want to count North Korea, for whatever that’s worth). However, there’s one huge wildcard, and that’s Russia. Hard to know if their “alliance” with China is real or just for show, but they would change everything if they supported China, at least if it went “non-conventional.”

Anyway, I’ve been seeing this scenario coming since the whole virus fiasco started. I can’t see some type of conflict with China being avoidable. Either we kick the can down the road again, and China at some point again does something that devastates the world economy (a certainty, and one that we cannot tolerate happening a second time), or we act soon to bring down this regime. There are no alternatives. Any notion by the business types, trying desperately to save their financial deals with the devil, that we can just go back to playing nice with China is absurd. I hope the “business community” is starting to see the real price of “free trade.” That phrase may yet lead to World War III. True free trade among friendly nations can be a great thing, but unbalanced trade with a hostile nation driven by evil ideology is idiotic and can create a monster that drags the entire world into conflict.

Our business people and our politicians have created quite the monster in China. Now we must kill it.