President Trump posted a chilling meme a few hours after the lawless Democrats voted to impeach him for non-crimes.

Democrats voted in a straight party line vote to impeach President Trump for abuse of power on Wednesday night.

The second article of impeachment was for ‘Obstruction of Congress.’

228 Democrats voted to impeach. 192 Republicans voted against the sham.

Symbolically bad but I think they’ve succeeded only in TURBOCHARGING us.

I think it will go down in history as being the beginning of the END of them.

Wishing this was the good old days where we could heat up a few barrels of oil and gather some feathers.

An image similar to that one has been posted on FR many times.

For the first time in my life, I’ve actually donated to a campaign tonight.

I suspect, I’m not the only one.

I posted the img link yesterday. Obviously the drama queen who called it chilling is just a moron.

That meme is “Chilling” ONLY to Traitors and commies.

8 posted on 12/18/2019 8:40:17 PM PST by goodnesswins (Want to know your family genealogy? Run for political office...")
[ Post Reply | Private Reply | To 1 | View Replies]
To: bitt
Their talk of going after Pence makes this clear. They went after Kavanaugh as well. Scorched Earth policy Red Democrat Socialists. 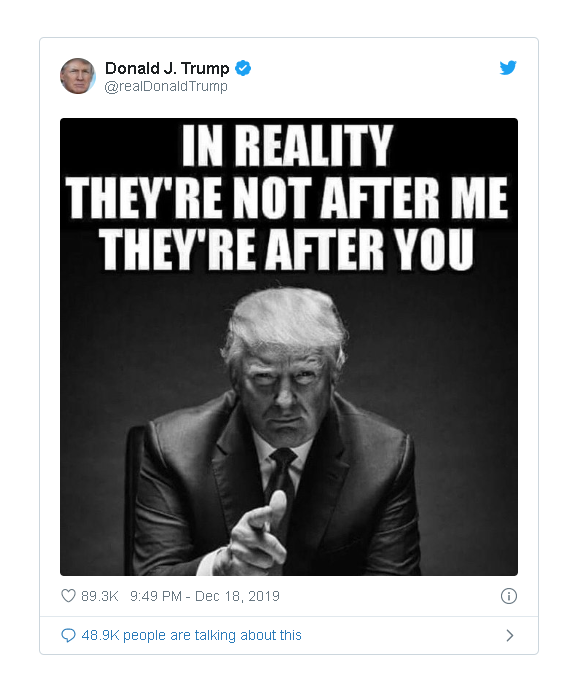 There is no crime. There is rage. DemocRATs want power and they can’t get it while free elections exist.

This is going to be REALLY energizing.

We get through THIS?

I think it’s going to turn out okay.

I for one can assure you, you’re not. It’s time we ALL put our money and our time and effort in defending this president and this country from the crazed 24/7/365 socialist /marxist / democrat / deep state / MSM assault.

That meme had been around for at least two years. Who is getting chilled now?

I found the picture to be inspiring because it is absolutely true. The Democrats have bad things planned for those who resist them.

“Never forget, what the Democrats are doing to President Trump, is what they will do to us....Their lust for power stands before all else...They would gladly ruin any Trump supporter with the same zeal.

This is the same hatred they have for this country and for you....They would gladly destroy anyone who stands in their path.

Scary thought the first time you see it.

Then after a while it's like part of the scenery of being a Trump supporter. Similar to when you realize if you have a Trump bumper sticker someone will key your car - or that your kid's not safe wearing a MAGA hat...

I wouldn’t call that chilling.....we understood this before the 2016 election and why we voted for Trump...we saw not only our nation going down the tubes but our ‘freedoms’ and that of our children and grandchildren as the D-rats spread their socialism acrosss this nation.