I Will Be Joining the Moscow Protests Today. Here's Why
Moscow Times ^ | August 3, 2019 | Sergey Radchenko

An unauthorized protest is taking place in Moscow today. “Unauthorized” means that those participating will risk arrest and possibly time in jail. More than 1300 protesters were detained a week ago, during another unauthorized rally. Scores were brutally beaten by the riot police.

The authorities have signaled their intention to crack down hard in the hope of deterring citizens from turning up at today’s protest. Let me explain my reasons for going.

This is a protest against the government’s decision to prevent independent candidates from running in the local elections.

But the elections are not really the issue. When putting their names forward, the independents (many of whom have now been arrested) were testing the limits of the regime’s flexibility. If the regime opened up — just a little — one could then hope for the gradual widening of the sphere of political contestation.

This, unfortunately, did not happen.

This did not happen because the Moscow city authorities feared that should the independents be allowed to run, the Kremlin-backed candidates would lose with big numbers.

Russian regional elections last fall showed that the regime can lose even when it resorts to electoral fraud.

If seats are lost to the opposition — first at the local levels, then perhaps even at the national level — the Kremlin will be placed in an untenable situation.

Putin remains personally popular but the tsar cannot govern without his boyars. The regime thus deemed creeping democratization of Russia to be an unacceptable risk. By calling peaceful protesters dangerous rioters, the government appears to be evoking the spirit of China’s June 4, 1989.

Where do I stand on all of this, as a Russian citizen?

I live a very comfortable life. A trained historian, I became a professor at the tender age of 35. Over time, I have achieved a degree of respect and recognition for my academic work.

I have secured a tenured post at a prestigious Western university and I spend several months a year in the U.K.

Unlike many Russian government officials, I have never stolen anything from Russia, nor do I owe anything to Russia. Everything that I have achieved in my life, I achieved it through hard work.

In other words, I have less stake in Russia than many idealistic youngsters who grew up in the shadow of a corrupt regime that gives them no dignity and little hope of advancement in life.

But, I am still Russian. And I believe in Russia.

I’ve always thought of myself as a hardened cynic. Many peers of my generation have a cynical take on things. Russia’s 1990s did it to us. But deep below the veneer of cynicism lives an undying faith in a better world and a conviction that all of us have something to contribute to a new Russia. We all can do our part. And we should.

Yes, I could also remain on the sidelines and watch others — mostly people much younger than me – stand up for me and for the rest of us.

But as a Russian, a European, and a citizen of the world, do I not have the responsibility to stand with them, shoulder-to-shoulder, in defense of values that we share: Free and fair elections and democratic governance?

Now, you might say: These are complicated concepts, to be discussed in the classroom, not on the streets. As a professor, this is what I would normally do but I cannot sit still when police batons are falling on the heads of peaceful protesters.

One virtue of being a historian is remembering things. Even events that you do not experience first-hand.

We — Russia, Europe, the world — have been here before. We must not allow oppression to return.

If this means joining up with youngsters to call for freedom, so be it. At least no one will say: Oh, it’s just a bunch of hipsters protesting.

Yes, there will be many young people on the streets today, many students. And at least one history professor. 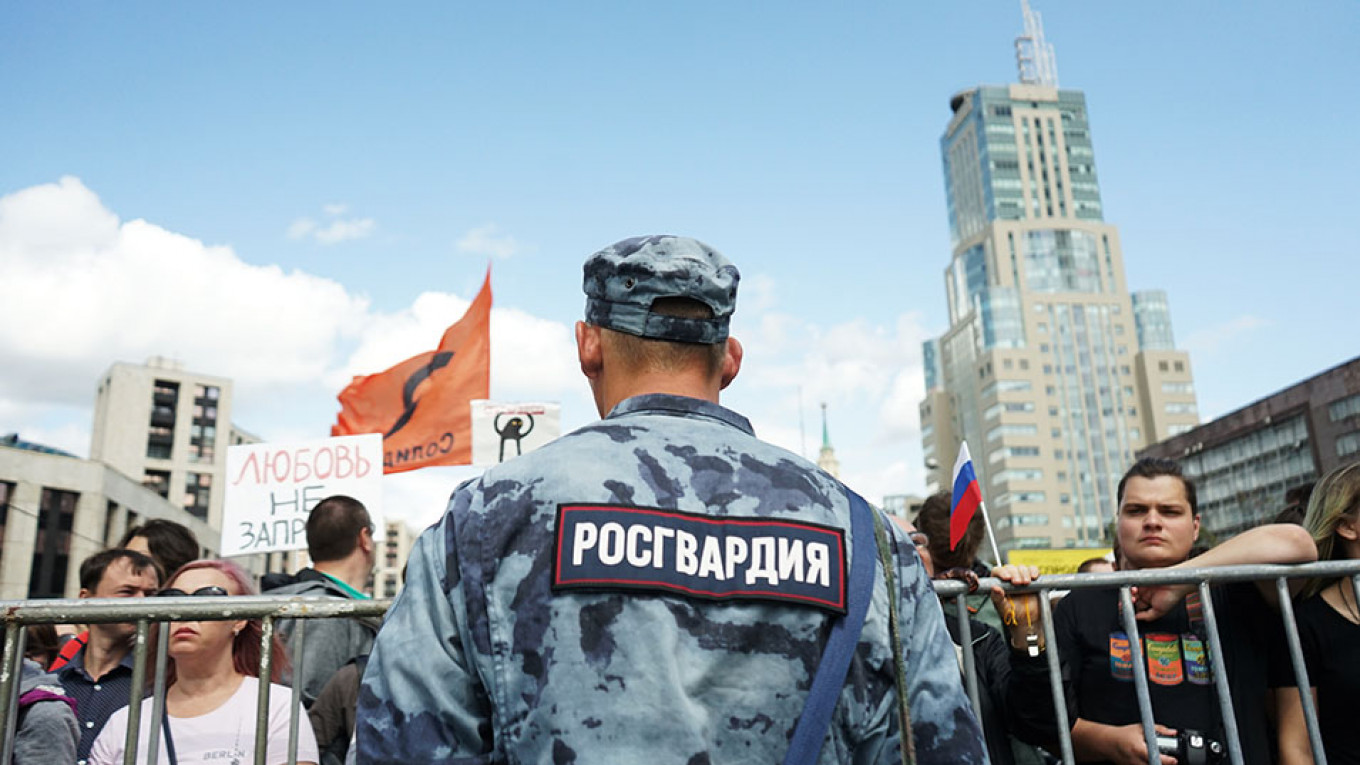 3 posted on 08/03/2019 8:26:13 AM PDT by LibertyWoman ( Despite what your momma told you, violence does solve problems.Chris Kyle-American Sniper)
[ Post Reply | Private Reply | To 2 | View Replies]
To: CondoleezzaProtege

Best of luck professor. I look forward to the day when Russia becomes free.

Not in this world. We are now seeing the twilight of freedom and liberty all around the world.

In Russia, a federal law criminalizing the distribution of materials among minors in support of non-traditional sexual relationships, was enacted as an amendment to an existing child protection law.

Putin’s draconian measures only awaken extremist backlash (see: Pussy Riot the band) and have given rise to all kinds of sexual deviancy with HIV rate being at an all time high in Russia.

From 3 days ago: HIV related deaths in the rise in Russia - Health Ministry
https://www.themoscowtimes.com/2019/07/31/hiv-related-deaths-on-the-rise-in-russia-health-ministry-a66644

Not to mention Stalin was also anti-gay. But I suppose you don’t have a problem with him either.

“” “” Putin’s draconian measures only awaken extremist backlash (see: Pussy Riot the band) and have given rise to all kinds of sexual deviancy with HIV rate being at an all time high in Russia.”” “”

ROLFMAO! What ‘draconian backlash’ and how is it related? :)

It is a global battlefield. There are so many fronts, that those fighting asymmetrically have an advantage beyond their passion and determination.

It will continue for a long time. However, the more repression, the more resistance and I don’t mean the traitorous resistance of today’s American authoritarians embedded within a cabalistically dominant administrative state.

POTUS Trump has forged an interesting coalition of like-minded patriots in various nations. Neither our President nor the leaders of his ideologically allied countries stand apart from their populace.

Many, many, many humans alive today know that freedom and liberty are worth the fight and the fight is worth the cost.

You are overlooking the real picture.
First of all, free societies aren’t natural globally.
United States of old is probably the single somehow successful example of society which got freedom and liberty right and the rest were somehow led by example after WWII.

That has abruptly ended with Clinton presidency and only got worse with every next administration.
Currently the democratic institutions are used by the globalists to gain control over governments and loot targeted societies.

Freedom of press is used to run fake news, freedom of assembly to run subversive groups and rioting mobs, and free elections to install globalist puppets using all of the above.

On top of that people see that US has a lot of issues with freedoms lately and barely an example anymore although talking heads from the department of state are still lecturing people around the World on values US politicians aren’t following both at home and abroad. That leaves the world without only worthy example.

Also for the reasons above the societies are wary of democratic institutions rightfully seeing them for the tools of globalists, many sitting in the US government to take control and highjack their nations.

The examples of ruin inflicted via manipulation of free society institution are numerous of late.

I personally believe that liberty and freedoms are above all but in light of all the above you might understand why the majority is thinking differently.

Russia is a good example. It was a perfectly free country just ten years ago but currently transforming into a soft dictatorship mostly on fears that foreign meddling might cause the situation typic to that of the Arab spring.

*** Not to mention Stalin was also anti-gay. But I suppose you don’t have a problem with him either.***

Do you know how many of my male gay patients are still alive? NONE. Their deaths from HIV/AIDS were a result of their lifestyle choice.

Do you know how many of my sixteen male gay friends are still alive? ONE. The rest died from HIV/AIDS.

Most of my male gay patients and some of my friends willing to share their “stories” had been victims of pedophiles. Disgustingly, Step-fathers were the #1 offenders, followed by trusted friends or relatives, and the employer of a parent.

I guess in your pathetic smear attempt, that means I am a Stalin Supporter.

You are arguing with a camouflaged liberal that is why such an arguments. She has an agenda too. I am yet to see her to register a displeasure over French ‘draconian’ resolve of Yellow Vest uprising which was by far more violent than everything the government did in Moscow.

They must resort to this because the electorate (the "people") are not on their side.

I'm in Russia right now, and the only people I talk to who have sympathy for these "protesters" are those who themselves have not accomplished much in life and feel good blaming it on the government/Putin.

They are gaining traction though. Breaking the law they are but let’s be honest they are a peaceful protestors so far.
None of them would be arrested in a free country.

15 posted on 08/04/2019 4:59:38 AM PDT by NorseViking
[ Post Reply | Private Reply | To 14 | View Replies]
To: billakay
I'm in Russia right now, and the only people I talk to who have sympathy for these "protesters" are those who themselves have not accomplished much in life and feel good blaming it on the government/Putin.

The main reason I don't have any respect for this "movement" (if you can even call it that) is that the leaders (at least Navalny) don't really have any principals. His only principal goes like this: "if Putin did/said it, it is bad". Putin could announce the most wonderful thing possible, and Navalny will find some way to find fault with it. He refuses to recognize that Putin has enormous positives (which the vast majority agree with), and this is why he cannot build up more than his handful of supporters.

You are right about this guy. The politicians running as anti-corruption crusaders are historically spoilers especially in countries caught in a middle income trap. They are incapable as leaders more like agents of destabilization and usually has something much worse following them exploiting all the destabilization to take power.
Another point Navalny is Yale educated, a frequent visitor of US Embassy and his family lives in New Jersey.
That’s some real collusion there.
US aren’t doing a good work for freedom and democracy in Russia by backing these people.

Haven’t seen that before but now it looks more like Ukraine in 2014.
The Antifa guy with guns could make a great case of ‘police shooting unarmed protestors’ if not caught.
Soros loves false flag.