She used to work in Matamoros and she was a nice lady.

<><> Bill Clinton and pedophile Jeffrey Epstein flew on Epstein’s private jet in 2002 to meet with the Sultan of Brunei.

<><> The mega-rich Sultan later donated between $1-5 million to the Clinton Presidential Library in Arkansas.

All of that is proveable.

Those mideast potentates are known to have kinky sex fetishes.....was that part of the Clinton deal?

.....the Clinton Presidential Library is refusing to turn over documents related to Epstein......

Former President Bill Clinton was a much more frequent flyer on a registered sex offender’s infamous jet than previously reported, with flight logs showing the former president taking at least 26 trips aboard the “Lolita Express” — even apparently ditching his Secret Service detail for at least five of the flights, according to records obtained by FoxNews.com.

Clinton’s presence aboard Jeffrey Epstein’s Boeing 727 on 11 occasions has been reported, but flight logs show the number is more than double that, and trips between 2001 and 2003 included extended junkets around the world with Epstein and fellow passengers identified on manifests by their initials or first names, including “Tatiana.” The tricked-out jet earned its Nabakov-inspired nickname because it was reportedly outfitted with a bed where passengers had group sex with young girls.

“Bill Clinton … associated with a man like Jeffrey Epstein, who everyone in New York, certainly within his inner circles, knew was a pedophile,” said Conchita Sarnoff, of the Washington, D.C. based non-profit Alliance to Rescue Victims of Trafficking, and author of a book on the Epstein case called “TrafficKing.” “Why would a former president associate with a man like that?”

She also said there were initials on the flight logs indicating underage girls who were on the same plane.

Notice the carefully worded Bill Clinton denial last night. It only addresses the years 2002-2003. Four flights on the plane.

More parsing of words from the Clinton lie machine.

Video is over here in case you want to miss the sundress/treefort blog. https://www.youtube.com/watch?v=YL6soUcE_Vc

I don’t need a reporter to tell me that

The context of the clip I watched (with Sarnoff and Breem) was on Epstein and Clinton.

Neocon (Fox) News chose to flash an old picture of Epstein and Trump at least thrice. 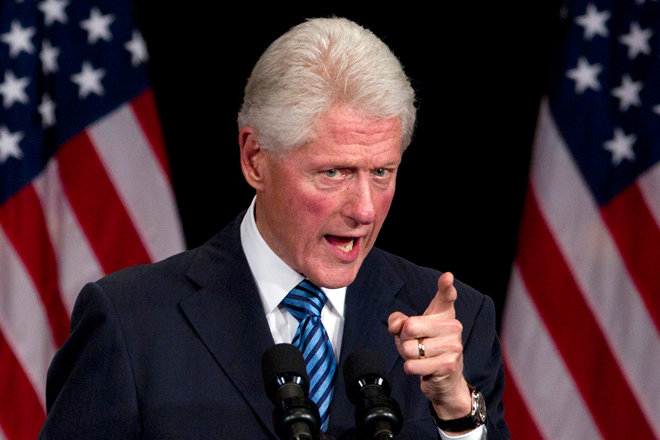 I did not have sex with Jeffrey Epstein.

Remember from Rush’s show back in the Clinton days, to the tune of “We Didn’t Start the Fire”...

(singing) Bill Clinton is a liar...