GRAFENWOEHR, Germany -- The German platoon took top honors in the Strong Europe Tank Challenge, a three-day competition that tested offensive and defensive operations and mounted orienteering, with Denmark and Poland placing second and third, May 13, 2016.

All platoons brought four tanks each to compete. Poland and Denmark both operated Leopard 2A5 tanks, each with crews of four soldiers. Slovenia competed with M-84 tanks with three people in each. Germany brought four-person crews to man Leopard 2A6 tanks. Italy's four-person crews operated Ariete tanks. The U.S. had two platoons using M1A2 tanks with four Soldiers in each one.

"To maintain the whole portfolio of capabilities, it is really important to also train together with tanks," said German Army Brig. Gen. Markus Laubenthal, chief of staff for U.S. Army Europe. "We want to promote the capabilities of armored warfare and tanks because it is needed.

"It is really important to work together with other nations as close as you can," he said. "Only training and integration build interoperability and trust for success in multinational operations."

Platoons rotated throughout the three events, vying for a possible 1,000 points. Crews conducted both offensive and defensive operations involving fire and maneuver for 350 possible points in each lane.

Mounted orienteering had a possible 300 points that was combined from six 50-point tasks, including a mystery physical challenge that emphasized teamwork. Platoons navigated through an obstacle course with 13 challenges. Soldiers fired 10 rounds from three different locations using their own service weapons during the combat pistol shoot lane. The vehicle identification lane tested the platoons' abilities to identify 25 friendly and threatening vehicles while traversing through a course. Crews had to recover, hook up and tow vehicles while under a simulated chemical attack. Finally, multinational teams reacted to an improvised explosive device, assessed and treated a casualty, and requested a medical evacuation.

This was the first multinational tank challenge that took place here since 1991, and the event fostered military partnership while promoting NATO interoperability.

"Grafenwoehr is an excellent place to do this because the maintenance areas are great, the ranges are great and the accommodations are great," Laubenthal said. "We can really accommodate many, many nations here together."

A competition course gets bulldozed, reshaped and setup for particular testing of skills.
3 posted on 05/16/2016 1:57:10 AM PDT by Berlin_Freeper
[ Post Reply | Private Reply | To 2 | View Replies]
To: Berlin_Freeper
sing
Louder! 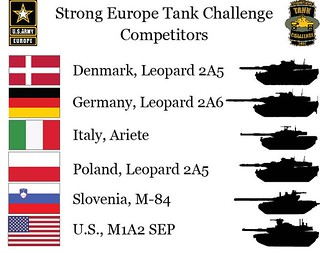 Very good, if you line them up in a row front back.

I really like the style of the German tanks, i used to build models years aho, still have a collection of them.

7 posted on 05/16/2016 5:21:03 AM PDT by Daniel Ramsey (Donald Trump has all the right enemies while Lyin Ted has all the wrong friends!)
[ Post Reply | Private Reply | To 6 | View Replies]
To: Berlin_Freeper
Grafenwoehr is an excellent place to do this because the maintenance areas are great, the ranges are great and the accommodations are great," Laubenthal said

The maintenance areas, ranges and accommodations at Kursk were never this good!

So Leopards took the top 3 spots, while the Abrams are in the group with old Soviet armor. Sounds like the US needs to think about upgrading to some Panzers.

Say what you will about Germany but the Leopard 2 tank in a way is on par if not a tad bit better than our current Abrams or the Russian T90 last I checked plus they were on home turf as well.

Nope, Grafenwöhr has been US home turf since about 1945. The Germans train near Paderborn and near Bergen-Hohne (not sure if the Brits or Germans run that one, but both use it). They used to have a training area in the Eifel that I drove through one time, but I’m not sure it’s still in use.

Interesting thanks for the info.

I served in the 26th Signal Battalion, during 1969-70 in Heilbronn, Wharton Barracks.

When our unit went to the field, we were spread out all over southwest Germany. Our mission was to provide communications support to other units, liking them to command.

So I never went to Graf. But over the years, I have heard it was the big field training location, for many disciplines—artillery, tanks, infantry, etc.