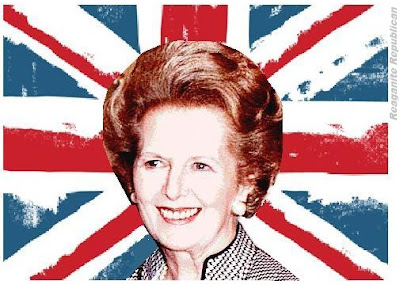 John Boehner at his swearing-in for 2nd term as Speaker:
"We're here to do something... not be something"
"

You mean -like- be a conservative John? Sorry to tell you,
but that makes you something else by default...

There are still people in my (conservative) party who believe in consensus politics.
I regard them as Quislings, as traitors... I mean it.


Pennies do not come from heaven. They have to be earned
here on earth.

Standing in the middle of the road is very dangerous-
you get knocked down by the traffic from both sides.

To cure the British disease with socialism was like trying to
cure leukaemia with leeches.

To me, consensus seems to be the process of abandoning all beliefs, principles, values and policies.
So it is something in which no one believes
and to which no one objects.

The trouble with socialism is, eventually you run out of
other people's money.


Nothing is more obstinate than a fashionable consensus...