The Left is lying when they say that the Occupy Wall Street "movement" is peaceful, respectful, and follows the law. They whine that it's a conspiracy when damning evidence it put forward; as always, liberals simply cannot argue with facts and rely on crazed fantasies to push their agenda. So this article is a compilation of the violence, the hatred, and the antisemitism extremely prominent in the Occupy Wall Street movement.

If you see these pictures and do not realize that there is a major problem with Occupy Wall Street, you are officially brain-dead. 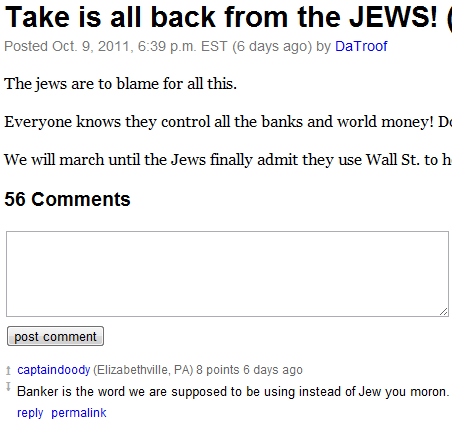 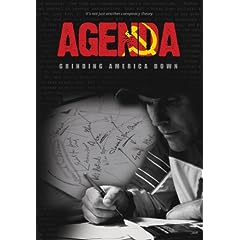 You gotta' see the preview of the movie

It's 6 minutes and 40 seconds, and it really is a "must see".
The movie review of "AGENDA: GRINDING AMERICA DOWN" is about a page or two.
The movie can be purchased at Amazon.comAgenda: Grinding America Down, Format: DVD or just click on the photo to the right.


3 posted on 10/16/2011 10:19:50 AM PDT by Yosemitest (It's simple: Fight or Die)
[ Post Reply | Private Reply | To 1 | View Replies]
To: WVNan
That's long gone. The New Left is rabidly antisemitic and hates both Jews and Israel. The New Left is a big supporter of Hamas and the PLO and wishes Israel destroyed and Jews eliminated.

American Jews do not seem to grasp this, especially the ones who fund the Democrat Party.

Really too bad Rudy isn't Mayor of NY anymore instead of that pansy, Bloomers.

I wonder how many Jews supported Hitler and the Nazi Party before it dawned on them that they were doomed?

It's the next time.

Barack 0bama: The man who brought “Kristallnacht” to America.

Only one thing to say...FUBO!!