The government of Serbia have arrested Ratko Mladic who was the former Chief of Staff of the Bosnian Serb Army and some people are claiming that this will end the chapter of this brutal civil war. However, Srebrenica is complex because events did not happen because of one factor but were based on the cold reality of a complex civil war where innocents were killed on all sides. However, which Srebrenica is “real” and which is “unreal?”

Srebrenica in all its complexity

This topic is very complex and it is abundantly clear that the mass media is still playing a propaganda war on the whole because the same story is being told. Yet the reality of Srebrenica is much more complex because this name is still being openly manipulated. Therefore, will real issues be raised or will the Bosnian leadership, America, the United Kingdom, NATO, and others, just continue with this “whitewash?”

Now, before I try to focus on neglected issues I would firstly like to state that thousands of Muslims were killed in Srebrenica once this place fell to Bosnian Serbian forces. It is also clear that innocent Muslims were killed during the mayhem of events.

Indeed, Srdja Trifkovic, historian, author, and foreign affairs analyst, comments about the complex nature of Srebrenica in his article called The Genocide Myth: Uses and Abuses of Srebrenica.

Srdja Trifkovic states that “During the Bosnian war between May 1992 and July 1995, several thousand Muslim men lost their lives in Srebrenica and its surroundings. Most of them died in July of 1995 when the enclave fell unexpectedly to the Bosnian Serb Army and the Muslim garrison attempted a breakthrough. Some escaped to the Muslim-held town of Tuzla, 38 miles to the north. Many were killed while fighting their way through; and many others were taken prisoner and executed by the Bosnian Serb army.”

Srdja Trifkovic continues by stating that “It is often pointed out that Srebrenica was an UN “protected zone,” but it is seldom noted that the enclave was simultaneously an armed camp used for attacks against Serb villages in the surrounding areas. Muslim General Sefer Halilovic confirmed in his testimony at the Hague Tribunal that there were at least 5,500 Bosnian Army soldiers in Srebrenica after it had obtained the “safe haven” status, and that he had personally arranged numerous deliveries of sophisticated weapons by helicopter.”

French General Philippe Morillon, the UNPROFOR commander who first called international attention to the Srebrenica enclave, is adamant that the crimes was quite “extraordinary in the region committed by those Muslim soldiers made the Serbs’ desire for revenge inevitable. He testified at The Hague Tribunal on February 12, 2004, that the Muslim commander in Srebrenica, Naser Oric, “engaged in attacks during Orthodox (Christian) holidays and destroyed villages, massacring all the inhabitants. This created a degree of hatred that was quite extraordinary in the region.”

These paragraphs alone paint the real picture because Srebrenica had witnessed many massacres of Serbian Christians within the surrounding region and the Muslim Bosniak forces were clearly not innocent.

Indeed, it must be pointed out that Bosnian Serb forces allowed Muslim women and others, to flee Srebrenica. Yet clearly the Muslim Bosniak forces cared little about this and many Serbian women, old people, and Serbs in general, were massacred in surrounding villages.

Major-General (Ret) Lewis Mackenzie who is a retired Canadian general also raises serious doubts about so-called “good” and “evil.” In his article called“The real story behind Srebrenica. The massacre in the UN ‘safe haven’ was not a black and white event,” which was published in The Globe and Mail (July 14, 2005), he clearly highlights neglected areas.

“As the Bosnian Muslim fighters became better equipped and trained, they started to venture outside Srebrenica, burning Serb villages and killing their occupants before quickly withdrawing to the security provided by the UN’s safe haven. These attacks reached a crescendo in 1994 and carried on into early 1995 after the Canadian infantry company that had been there for a year was replaced by a larger Dutch contingent.”

“The Bosnian Serbs might have had the heaviest weapons, but the Bosnian Muslims matched them in infantry skills that were much in demand in the rugged terrain around Srebrenica. As the snow cleared in the spring of 1995, it became obvious to Nasar Oric, the man who led the Bosnian Muslim fighters, that the Bosnian Serb army was going to attack Srebrenica to stop him from attacking Serb villages. So he and a large number of his fighters slipped out of town. Srebrenica was left undefended with the strategic thought that, if the Serbs attacked an undefended town, surely that would cause NATO and the UN to agree that NATO air strikes against the Serbs were justified. And so the Bosnian Serb army strolled into Srebrenica without opposition.”

After the Bosnian Serbian army entered Srebrenica it is clear that many things happened because events on the ground were changing quickly. This applies to many Muslim forces fleeing Srebrenica and it is clear that elites within the Bosniak Muslim army had escaped to safety and left others to their fate.

General Morillon from France also makes it clear that the Bosniak Muslim army was brutal and this would vindicate what Lewis MacKenzie states. Therefore, it is clear that people should be made fully aware about “the real Srebrenica” and not just an anti-Serbian point of view.

General Morillon comments that “Naser Oric was a warlord who reigned by terror in his area and over the population itself. I think that he realized that these were the rules of this horrific war, that he could not allow himself to take prisoners. According to my recollection, he didn’t even look for an excuse. It was simply a statement: One can’t be bothered with prisoners.”

Morillon also recounts how “the Serbs took me to a village to show me the evacuation of the bodies of the inhabitants that had been thrown into a hole, a village close to Bratunac. And this made me understand the degree to which this infernal situation of blood and vengeance [...] led to a situation when I personally feared that the worst would happen if the Serbs of Bosnia managed to enter the enclaves and Srebrenica.”

Again, the comment by Morillon appears to be vindicated by Lord Owen because Lord Owen was clearly worried about the fall of Srebrenica. Lord Owen highlights on page 143 of his book, Balkan Odyssey, that “On 16 April I spoke on the telephone to President Milosevic about my anxiety that, despite repeated assurances from Dr. Karadzic that he had no intention of taking Srebrenica, the Bosnian Serb army was now proceeding to do just that. The pocket was greatly reduced in size. I had rarely heard Milosevic so exasperated, but also so worried: he feared that if the Bosnian Serb troops entered Srebrenica there would be a bloodbath because of the tremendous bad blood that existed between the two armies. The Bosnian Serbs held the young Muslim commander in Srebrenica, Naser Oric, responsible for a massacre near Bratunac in December 1992 in which many Serb civilians had been killed. Milosevic believed it would be a great mistake for the Bosnian Serbs to take Srebrenica and promised to tell Karadzic so.”

I have given quotes from people who were on the ground and from people who know a lot about the real events of Bosnia and Srebrenica. It would be difficult to claim that Lord Owen, General Morillon, and Lewis MacKenzie, are pro-Serbian or that they are holocaust deniers.

Therefore, it is clear that “the real Srebrenica” is not being told and the same applies to the “hidden Islamic jihad” which took place during the civil war and how ex-President Bill Clinton gave the green light to Islamists from all over the world to enter Bosnia.

Lewis MacKenzie comments that “two wrongs never made a right, but those moments in history that shame us all because of our indifference should not be viewed in isolation without the context that created them.”

With this comment in mind and with the complex nature of Srebrenica and the entire civil war; then Ratko Mladic should be seen for what Srebrenica had become and in all wars you have massacres and in Bosnia – just like in all civil wars – many innocents were killed on all sides but this does not mean that history should be re-written and that one side should be blamed for everything when the facts state differently.

“... the mass media is still playing a propaganda war on the whole because the same story is being told. Yet the reality of Srebrenica is much more complex because this name is still being openly manipulated.”

“Therefore, will real issues be raised or will the Bosnian leadership, America, the United Kingdom, NATO, and others, just continue with this “whitewash?”

[Mass media propaganda? Kind of like when Chris Wallace of FNS regurgitated the false Arab Muslim propaganda to Herman Cain that the “...Arabs were kicked out of their homes in the ‘48 war”.

Wallace as a journalist should know better. The Muslims abandoned their homes at the urging of their leaders because they thought they would be successfull in exterminating all the Jews. Then they could return.

But the Guardian of Israel foiled their plans.

Look at the map, that green island ruining their master plan to create greater Serbia

4 posted on 05/26/2011 1:44:47 PM PDT by Terabitten ("Don't retreat. RELOAD!!" -Sarah Palin)
[ Post Reply | Private Reply | To 1 | View Replies]
To: Amerisrael
The most difficult case load in BiH is the identification of Srebrenica remains. As a result of attempts by perpetrators to conceal evidence of this major atrocity, many bodies were removed from their initial mass graves and reburied in other locations. As a consequence, body parts are found disarticulated in numerous primary and secondary mass grave sites. ICMP forensic anthropologists use DNA analysis as a tool in re-associating disarticulated parts of the same body. In one case, ICMP identified a Srebrenica victim whose body parts were found in four different mass graves two of which were 20 km from the other two locations.
5 posted on 05/26/2011 1:49:38 PM PDT by Berlin_Freeper (Obama can't see something pure like the truth without wanting to abort it.)
[ Post Reply | Private Reply | To 1 | View Replies]
To: Berlin_Freeper 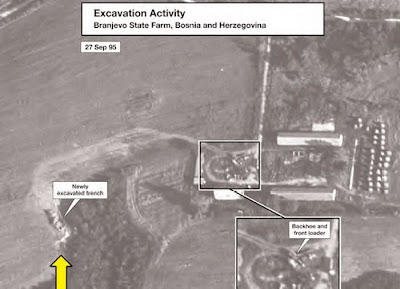 Aerial view of Branjevo Farm, excavation activity in late September 1995. Bosnian Serbs first buried the bodies of the Srebrenica massacre victims near the execution sites, but then dug out many of them with bulldozers and reburied remains in secondary mass graves in an attempt to hide the crime.
6 posted on 05/26/2011 2:13:08 PM PDT by Berlin_Freeper (Obama can't see something pure like the truth without wanting to abort it.)
[ Post Reply | Private Reply | To 5 | View Replies]
To: Amerisrael
BBC - 31 March 2010
Serbian MPs offer apology for Srebrenica massacre
Serbia's parliament has passed a landmark resolution apologising for the 1995 Srebrenica massacre - Europe's worst atrocity since World War II.

The motion, approved by a narrow majority, says Serbia should have done more to prevent the tragedy.

Most war crimes and genocides (not all) are of this type.

Two sides develop such intense hatred, due to atrocities by both sides, that when one side wins it massacres the other. Most of the time, the exact same thing would have happened in reverse had the other side won.

Yet these events are usually presented as being due solely to the evil of the winning side, with the losers being purely innocent victims.

The above apply during wartime, particularly civil wars. The Nazi and commie massacres were not wartime events in this sense. They were roundups and planned killings in areas that were fully under their control.