Stil doubting the 'power' of the ARAB LOBBY, after the giant U.S. lost to 'bad sportsmen' of Qatar?

US World Cup snub shows Qatari lobbying power | ProSports Colorado Dec 2, 2010 ... In Qatar, FIFA officials saw an opportunity to accomplish two goals in ... The reality is that Qatar is the uber-elite of the Arab world, ...

And this is just a tip of the iceberg of global Arab lobby. Of course it's not just about sports.

Now, understand how the [international arena, like: the] United Nations and Amnesty work, and for whom - most of the time.

Nonsense! Arabs are our allies and have always been our allies.
2 posted on 12/06/2010 10:29:04 PM PST by Eyes Unclouded ("The word bipartisan means some larger-than-usual deception is being carried out." -George Carlin)
[ Post Reply | Private Reply | To 1 | View Replies]
To: Eyes Unclouded
I hope you are sarcastic...

Or Human Rights Watch's crippling of U.S. security or its failure to criticize strong enough the human rights abuses, racism and Islamic apartheid in the Muslim world, yet, is so quick to categorize Israelis struggle againt genocidal Arab-Muslim bigots as "violations." 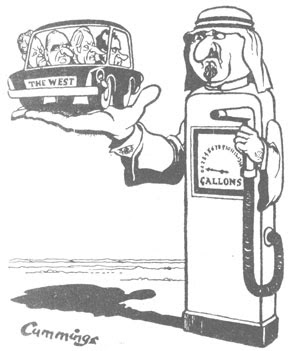 I do understand the dangers and problems of the arab lobby.

Still, I can’t get that worked up over the World Cup loss. We had it here in 1994 and anyway it’s only soccer.

How about the income it can generate?

Agreed, and heck, it wasn’t the “Arab lobby” that won, the decision was a political snub aimed at the US, nothing more, nothing less.

Power? Don’t make me laugh. They have influence and money, and that goes far. But not so far as to say “Power”.

Political power comes out of the barrel of a gun.

And this was a popularity contest over where to host a soccer match, not an exercise in power.

Considering the costs of putting it on it’s still probably not worth it. Again, it’s only soccer.