Why Rioters Will Eventually Turn Their Rage On Christianity If Not Stopped
The Federalist ^ | June 30, 2020 | Nathan Stone The outrage over statues and the 'white' depictions of Christ is meant to detract us from the real endgame: the 'canceling of Christianity itself.

Towards the end of his reign, Tuthmosis III of Egypt ordered the destruction of all the public monuments to his aunt, Hatshepsut, the former leader of Egypt. It wasn’t the first instance of iconoclasm that the world had seen, but it has become one of the most memorable.

Iconoclasm — the deliberate destruction of images — has existed almost as long as man has walked the earth. When it took place, there were usually deep and profound reasons for these planned destructions. Rulers sought to erase the memory of their rivals.

Leaders like Leo III of the Byzantine Empire believed chopping statues was a good way to get God on their side at the next battlefield. Sometimes, images were destroyed simply because it was believed icons needed to be smashed since they represented an evil to be defeated. Such was the motivation for Protestant sects who destroyed Catholic statues in the Netherlands and Muslim populations who destroyed Christian icons in the Middle East and Africa.

Recently, Shaun King, a champion of the Black Lives Matter movement, called for the destruction of Christian iconography, statues, and stained glass, if they represent Christ, His mother, or any of the apostles as white. This, according to King, makes the iconography nothing more than a “gross form of white supremacy” and “racist propaganda” created to be “tools of oppression.”

To King, the only proper response to any fossil of racism or oppression is to destroy it. As any depictions of Christ or the Virgin Mary with light skin represent “white supremacy,” according to King they’ve all got to go.

True Christianity Was Never About Race

The idea that Christianity is or has been infected with white supremacy is not new. Susan Abrahams, the dean of faculty at Pacific School of Religion, blamed “White Christians” for Charlottesville. Jeannine Hill Fletcher wrote a book in 2018 that purportedly showed racism was a natural outgrowth of Christianity, springing from “Christian superiority.”

This premise is wrong, first because of the existence of black saints. There is a rich tradition of African Christianity. Many of the earliest fathers of the church hailed from Africa, including Cyprian and St. Augustine of Hippo.

Furthermore, multiple men and women are recognized by the Catholic Church as saints who were black, including St. Moses the Black, St. Benedict the Moor, and St. Martin de Porres. It is a strange racist and oppressive system that recognizes the sanctity of people from across the world, regardless of their color, and bequeaths upon them the title of “saint,” a moniker that designates all who possess it as attaining ultimate equality before the throne of God.

In 1435, Pope Eugene IV demanded that Christians free all enslaved Canary Islanders. The proclaimed punishment for disobedience was excommunication. One hundred years later, Pope Paul III decreed no indigenous peoples were to be enslaved. During the 19th century, Anglican Christian William Wilburforce succeeded in changing the manners and morals of his country so thoroughly that the British Empire outlawed slavery in 1833 and commanded the Royal Navy to treat slave ships as pirates.

Jean de Brébeuf, a Jesuit missionary to Canada, wrote the Huron Carol specifically to transpose the Nativity story to a Huron setting. One 16th-century painting of Christ depicts Him as Japanese. Images of Our Lady of Guadalupe portray Christ’s mother as a Mexican woman.

To buttress this, we even have proof that Africans were accepted in medieval Europe. There is evidence that Christians from Ethiopia pilgrimaged to Spain and were present in medieval Rome to the extent that the church of Santo Stefano degli Abissini was built, and rebuilt, specifically for Ethiopian Christians.

The Radicals Want to ‘Cancel’ Christianity

Stained glass and statues do not show Christianity to be racist. A quick Google search would have shown this to King. So why King would make a statement that could be so easily refuted? The answer is that this outrage over white portrayals of Christ and the apostles is a blind meant to detract us from the real goal: canceling Christianity.

Just a year ago, believing the radical left had such a goal would have sounded conspiratorial. Within the last four weeks, however, St. Patrick’s Cathedral in New York City was vandalized. Across from the White House, St. John’s Church was attacked twice. Neither church nor the statue was involved in any way or form with the deaths of George Floyd or Rayshard Brooks.

More recently, in the Polish city of Breda, a memorial to World War II Polish soldiers was vandalized with BLM graffiti. Never mind that the memorial features a replica of the Virgin Mary as a black woman, the soldiers the memorial heralds were fighting fascists, and Poland has no history of colonization anywhere.

The reason for the attacks becomes clearer when considering that Black Lives Matter and Antifa are Marxist organizations and Marxism is an enemy of Christianity. It has to be. An atheistic system that sees economic Hegelianism as god will have to consider all transcendent religions the enemy. It’s why the Soviet Union was an atheistic state, which replaced God with the Communist Party.

Another reason comes from the hatred Marxism holds for Western Civilization. The dream of Marxism is to eradicate Western civilization and replace it with itself; its reaction to the legitimate evils that have been committed by Occidentals is not reform but obliteration.

Marxism assumes that because the windows are dirty and cracked, the entire house must be demolished. We see this same hatred today in the insurrections occurring right now. There is no reason for mobs pulling down statues of Ulysses S. Grant or Hans Christian Heg or calling for statues of Abraham Lincoln as the Great Emancipator to be removed.

Christianity created specific institutions that we identify with the West, like hospitals and universities, but it did much more. Most importantly, it brought about the great fusion between faith and reason. Before Christianity, there had been tension between the two.

Greek philosophers, for example, often did not believe in the gods of Mount Olympus, whether we are talking about Plato and his World of the Forms, Aristotle’s Unmoved Mover, or the atheism of Epicurus. Christianity, seeing faith and reason both as gifts from God, united the two for the first time.

As Dr. Rodney Stark has argued, this allowed the West to become the epicenter of learning and science. Because God was logos (reason) and perfect, His universe ran on immutable principles that could be discovered by men, using the reason God gave them.

Because Christianity teaches that all men are created by God, it ushered in a radical idea of equality not seen in the world before. And because every person is made in the image of God, all people are endowed with inalienable, natural rights, a strain of thinking first proposed by the later Scholastic philosophers.

Christianity was also responsible for Europeans leaving their homes in the Crusades and the Age of Exploration. Land and gold were motivations too, but God was right there in the center. In one famous example, the signers of the Mayflower Compact listed the “Glory of God, and the Advancement of the Christian Faith” as two of their reasons for journeying to Massachusetts.

All of these accomplishments are evil in the eyes of Marxists. They helped build Western Civilization into the glory that it was and encouraged colonization, conversion, objectivity, and logic, all things that have been declared to be hallmarks of “white supremacy.” As such, Christianity, along with the police, history, and science, must be destroyed to clear the ground of the new utopia.

If this trajectory isn’t stopped, we should not be surprised if the Marxists among us take King seriously and begin to burn churches like they are burned in France.

Yes. Chaos is the hallmark of anti-Christ behavior.

+1 for the shout out to Dr. Rodney Stark.
“Required reading.”

If so, lots of them, the anti-Christian people, will be meeting their Maker sooner than later.

Eventually? The only other thing driving them is race. The Left hates Christianity and seeks to destroy it. Not a revelation.

lol.. so communists and marxists can’t even tell the truth about who they are hating.

It’s ok... very soon their greatest wish will be granted... a world without Christians.

Yes. There is a literal lake of fire waiting for those who reject Christ. It never ends contrary to what people people with extinction fantasies maintain.

11 posted on 06/30/2020 7:14:27 AM PDT by Rurudyne (Standup Philosopher)
[ Post Reply | Private Reply | To 2 | View Replies]
To: Kaslin
This premise is wrong, first because of the existence of black saints. There is a rich tradition of African Christianity. Many of the earliest fathers of the church hailed from Africa, including Cyprian and St. Augustine of Hippo.

Another guy who assumes everyone from Africa was black. Hippo was just across the Mediterranean from Italy. North Africa is not the same as sub-Saharan Africa.

I’ll stand with religious liberty and the constitution.

“Sell your cloak and buy a sword.” Jesus Christ

14 posted on 06/30/2020 7:23:41 AM PDT by M Kehoe (DRAIN THE SWAMP! Finish THE WALL!)
[ Post Reply | Private Reply | To 1 | View Replies]
To: Sans-Culotte
If he's American than he's wrong (in America all Caucasians are “white”). Euros however have a different definition of who's “white” and who's not.
15 posted on 06/30/2020 7:27:21 AM PDT by Varda
[ Post Reply | Private Reply | To 12 | View Replies]
To: Kaslin
The dark forces use communism as a tool, and communism requires the replacement of all religions with the One World Religion, i.e. worshiping a mortal leader, just like Hitler did. Hitler closed all churches, confiscated their goods, and imprisoned priests who would not close their churches, and then Hitler himself was worshiped. This was well-documented by the Nazis themselves.

The communism agenda is provided as text here: http://www.freerepublic.com/focus/f-news/922684/posts.

This is a mirror of the French Revolution of 1789. That ended when the progressives turned on themselves.

The problem is, they don’t believe in G_d.
They have no moral restraint and thus no limits that they won’t go beyond in their march to whatever their final goal is.

Another war is coming and this one is going to look allot like the Jews in 1930-45.
This time they are coming for everyone who doesn’t do what they are told. 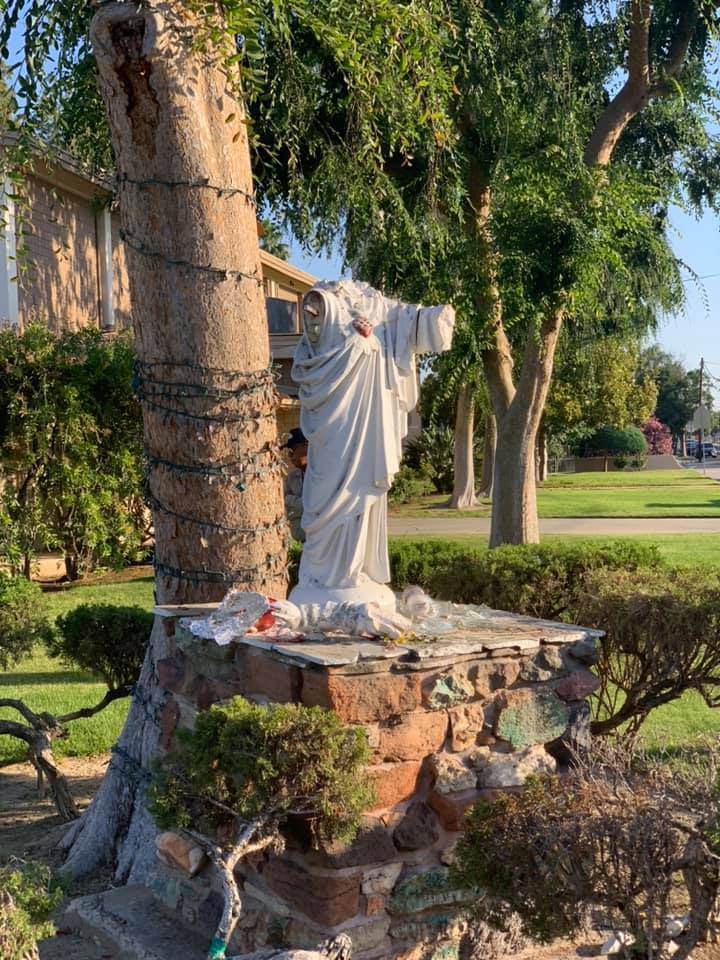 A word to the wise for the rioters.